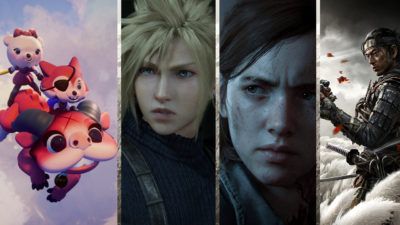 In case you didn’t know, the next generation of video games is almost upon us! Before the year is done, we’ll be getting our mitts on the Xbox Series X, and the PS5. Now before PS4 gamers do that, there’s still a lot of big PS4 exclusives left to be played, and we rounded up the big PS4 exclusive 2020 list that you need to check before the PS5 releases!

Note that these are PS4 console exclusive, and some of the games listed here can be played on PC, but that doesn’t lessen their impact or status. Also, release dates are subject to change, so don’t blame us if some of the release dates here are moved.

Behind the minds Media Molecule, which is best known for the LittleBigPlanet franchise, Dreams is more of a game creator inside of a game than a regular game. Sony’s “Play, Create and Share” tagline is apt, as Dreams features user-generated content that can be shared to other gamers.

Out of all the games here, this one is the biggest question mark of all. It could very well be one of the best VR experiences of all-time, or one of the biggest disappointments of all-time. I mean, who hasn’t thought of donning the Iron Man suit and tearing stuff up with lasers, missiles and more, right?

That said, give this is a VR-only game, we’re not expecting a full-fledged AAA game release here, so expectations are a bit tempered. Even so, PlayStation VR fans should be in for a treat later this year.

The sequel to Team Ninja’s surprise action-RPG hit Nioh, Nioh 2 is actually a prequel to the first game, this one will feature a three-player cooperative mode. If the first game is any indication, players can expect a challenging but enjoyable action game.

The 2020 entry to Sony’s best-selling baseball sim, MLB: The Show 20 is Sony San Diego’s yearly iteration of America’s favorite pasttime. Expect real players with updated stats, rosters and more. If you’re a baseball fan, this is the game to get.

Persona 5 Royal is an enhanced version of fan-favorite Persona 5, though this one features an additional Phantom Thief member, a new Palace, new music, and additional plot elements. There’s also a new school semeter that’s playable, and of course, graphical improvements and gameplay fixes. If you’ve yet to play Persona 5, this is the version to get. If you have and want more of it, then this should do the trick.

From the makers of Friday the 13th: The Game, if you’re a fan of the assymetrical multiplayer experience, you’ll have a new game to play on soon! This time, developer IllFonic gives players actual guns to defend themselves! They’ll need it as the Predator will have his usual assortment of toys to deal pain, and collect heads.

What else needs to be said regarding Naughty Dog’s upcoming sequel to possibly one of the best games ever made? We already know it’ll continue where the first one left off, and what we’ve seen of the gameplay so far looks very, very promising.

If there was a game that would be an impulse buy for most gamers without needing to check reviews, then The Last of Us: Parti II is it.

We would be shocked if The Last of Us: Part II doesn’t win 2020 Game of the Year honors.

Those who own a Nintendo Switch, Genshin Impact might rub some people the wrong way given how it seems to be very similar to The Legend of Zelda: Breath of the Wild. That said, if you don’t own a Switch, that might be the exact reason why you’re looking forward to this.

Granted this is being developed by relatively unproven studio miHoYo, but you have to admit, what gameplay’s out there right now, is very intriguing.

Note: Genshin Impact has been confirmed for the Switch just last month, but we decided to include it anyway.

It’s been ages since we had a game made by Sucker Punch Productions. inFamous: First Light was released way back in 2014, and since then, we haven’t heard a peep from the studio — until the unveiling of Ghost of Tsushima; a completely new IP, and something completely new for the studio.

Can Sucker Punch create the same open world magic it weaved with the inFamous franchise with one set in feudal Japan? We’ll find out later this year, but things are definitely looking promising.

The eight mainline entry in the popular Yakuza franchise, it’s been released already in Japan, but western gamers need to wait to experience this RPG.

Yakuza Like a Dragon will feature a new protagonist, and of course, a change in how it plays.

Arc System Works has always been assocated with fighting games, and the studio aims to revive the Guilty Gear franchise with Guilty Gear Strive. We’ve already seen gameplay of it, and if you’re a fighting game fan, you’ll have this on your radar definitely.

It’s set for release in Japan this month, with XSeed Games doing publishing and localization duties for the game’s March 3, 2020 stateside release.

Fantasy Relink was originally announced way back in 2016, and barring any delays, will finally see the light of day later this year.

There you have it. These are the last PS4-exclusive games that we know of being released this year. Will some of these be cross-gen with the PS5? There’s a high possibility of that, but for PS4 gamers, there’s a lot to play this year even with the PS5’s looming holiday release.