(Note: the opinion posted on this article is solely of the author’s and doesn’t represent the point-of-view of MP1st in its entirety).

November 15, 2019 is an important date for EA and their decade-long exclusivity for making Star Wars games, as that is the release date for Respawn Entertainment’s Star Wars Jedi: Fallen Order. Not only is it Respawn’s first game for consoles and PC that isn’t a first-person shooter, it’s also the first new Star Wars game EA has released since Battlefront II, and having cancelled two single-player Star Wars games. According to the litany of previews around the internet right now, Star Wars Jedi: Fallen Order is shaping up to be a great game. For EA’s sake it had better be because time is running out on their tenure as stewards the Star Wars video games and, if I’m being brutally honest, their track record has been spotty at best and downright terrible at worst.

When George Lucas sold all things Lucasfilm to Disney in October of 2012 one of the questions many of us had was “What is going to happen with Star Wars video games?” LucasArts hadn’t really done anything substantial with the property themselves in years and most of what we were getting were Lego Star Wars games and for PC gamers the last significant title was The Old Republic MMO developed by BioWare. The answer to the question came in May 2013 when it was announced that EA would have the exclusive* rights to Star Wars games for ten years (*Travelers Tales can still make Lego Star Wars games).

At the time, I was optimistic. People might forget but at that time EA was doing pretty well with the games they were releasing. Mirror’s Edge, Mass Effect 3 (negative opinions some people had regarding the ending notwithstanding), Syndicate, Battlefield: Bad Company 2, all came out the year prior. Yes, they had online passes and such — a business is still a business and wants to make as much profit as possible — but there was little reason for me to be concerned that they were handling the Star Wars license for the next ten years. 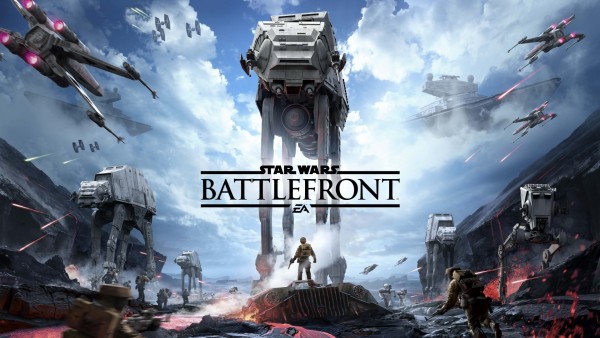 During E3 2013, EA confirmed that their highly regarding Battlefield developer, DICE, would be making a new Star Wars Battlefront game. Then, in 2014, news came in 2014 that acclaimed video game writer/director Amy Hennig, creator of the wildly beloved and popular Uncharted series with Naughty Dog, joined Dead Space developer, EA’s Visceral Games, to make a Star Wars game. Since Hennig’s pedigree has been single-player, story-driven games, all expectations was that she was going to bring something similar to Star Wars.

The future looked bright for Star Wars games under EA’s umbrella. Little did anyone know at the time that they would almost completely drop the ball.

It all started with the lead up to Star Wars Battlefront, released in November, 2015. It was easy to be excited at the notion of DICE making an FPS Star Wars game and the Battlefront brand already had a legacy and built in cache. Then it was learned that Star Wars Battlefront wouldn’t have a campaign, which turned off a vocal portion of the audience. Despite this, EA had lofty expectations for the game, projecting it to sell nine to ten million copies by the end of their 2016 fiscal year which ended on March 31, 2016 and increased that number to 13 million after its beta. Despite less than expected sales reported by GameStop EA stood by their 13 million projections by the end of fiscal 2016 and the had, by all accounts, hit that goal.

So far, so good. It seems like the fervor around not Star Wars Battlefront not having a campaign was just a vocal minority that didn’t impact the game much at all. Sure, that disappointed fans that were chomping at the bit for a Star Wars campaign, between the critical reception which had it as a “good” game based and the sales were really strong. All signs indicated that EA was on a good path with Star Wars games.

2016 basically came and went without much information the next Star Wars games beyond some odd behind the scenes footage of people working on Star Wars games that was show at E3 2016 and the confirmation of Star Wars Battlefront II. 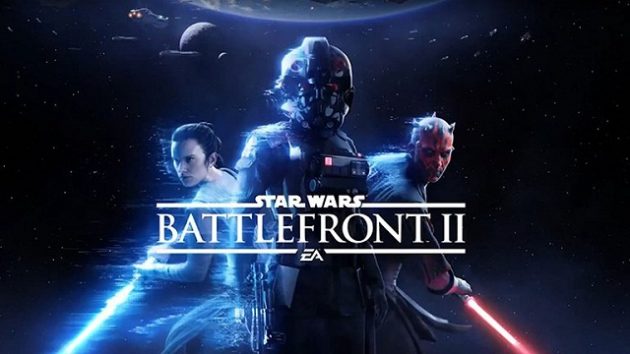 Fall of 2017 is when the wheels started to come off. On October 17, 2017 EA confirmed that they were shuttering Visceral games, who were working on a single-player Star Wars game, and that EA “needed to pivot the design” according to a blog post from EA’s Patrick Söderlund who was the Exectutive Vice President in charge of EA’s Worldwide Studios. The posts refers to EA “closely tracking fundamental shifts in the marketplace” and “shifting the game to be a broader experience that allows for more variety and player agency” in an especially thick layer of nebulous, means nothing verbiage. If I had to translate it reads something like “We want to somehow make this a Games as a Service” model and what they were making wasn’t doing that so they were handing the game off to EA Vancouver to oversee with help from EA support studios to help shape it into something else.

However, it wasn’t even remotely that simple. As per a report from Kotaku’s Jason Schreier posted ten days later goes into detail of the game’s troubled development. Problems included — but were not limited to — mismanagement, many issues involving EA’s proprietary Frostbite Engine, and an overall lack of resources. 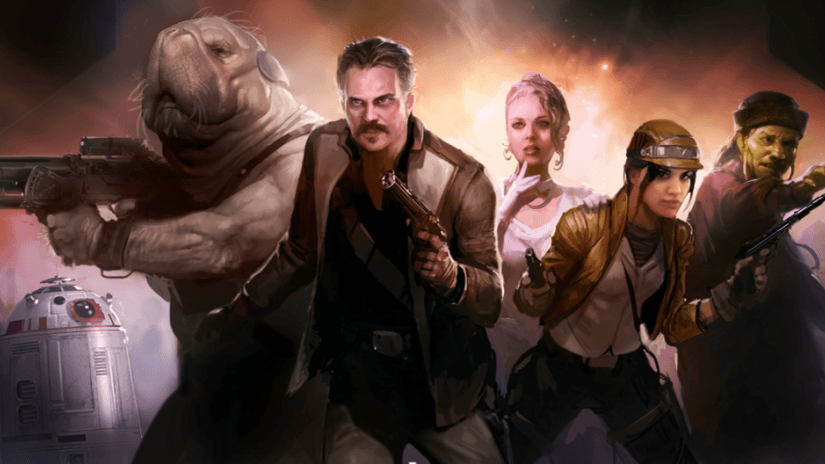 Two weeks after the scathing report dropped, it was a one-two punch for EA and Star Wars when DICE’s Star Wars Battlefront II was about to release, following the game’s beta, it was learned that the game would be full of loot boxes that would not only provide real world advantages to the competitive modes of the game, but also it would contain “Hero” characters (iconic characters from the franchise) and could be purchased with real world money. The developers advised that this could all acquired in game but that would require grinding for tens of hours. The loot boxes were clearly there to incentivize paying real world money to not have to put the time in making them “pay to win” by giving players willing to pay an advantage over other players who were either unwilling or unable to do so.

The backlash was so loud, so swift, that caught the attention of the governments of Belgium and the Netherlands for it being likened to gambling and investigations followed regarding these comparisons. On the other side of this investigation, Belgium banned the practice outright. It didn’t end there because the controversy caused EA’s stock to drop. This reportedly caught Disney CEO Bob Iger’s attention who then had Jimmy Pitaro, Chairman of Disney’s consumer products and interactive media call EA CEO, Andrew Wilson. A call that had EA suspend its loot boxes mere hours later.

EA is still answering for this as of last June when a senior executive from EA sat in from the United Kingdom’s Parliament and said that EA prefers the term “surprise mechanics” to “loot boxes” when trying to defend the practice. Surprise. Mechanics.

Quite the road to get here. In the six years since Disney signed the contract for exclusive Star Wars games they have managed to release two console and PC games, cancel two console and PC games, and the two games they have released were met with lower than expected critics scores and backlash and their most recent Star Wars Battlefront game has caused so much controversy that the governments of nations across the globe are investigating and EA is still dealing with it. Doesn’t seem like things are working out how both sides intended. It should be noted that despite the history and ongoing controversy, Disney CEO, Bob Iger said they have a “good” relationship with EA in an earnings call earlier in 2019. 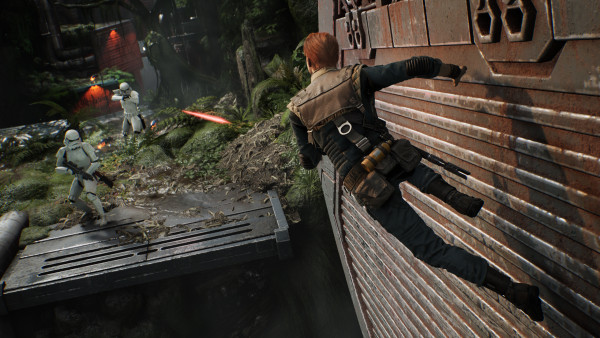 This brings us to Respawn’s Star Wars Jedi: Fallen Order which was clumsily, er, announced(?) at E3 2018 by studio founder and CEO Vince Zampella while being interviewed in the audience by host Andrea Rene and, that was it. We didn’t see anything from the game until a year later a few days prior to E3 2019 during EA’s “EA Play” showcase. Here we saw 15 minutes of gameplay that wasn’t met with hype but mostly questions as to how gameplay and combat was going to work. Would Star Wars Jedi: Fallen Order be completely linear? None of this was clear from the preview so if there was any excitement it was certainly muted by the questions. And given EA’s track record with Star Wars games so far, I wouldn’t blame anyone for having concerns. Respawn did confirm that there would be no loot boxes or season pass for the game – that a game won’t have these things being a bullet point feature can create a whole other conversation — so at least those concerned were stymied.

In the following interviews more details came out about the game such as the combat was “inspired” by From Software’s Dark Souls series and would be coincidentally similar to their recent Sekiro: Shadows Die Twice and Metroidvanias and the Soulsborne games in regard to exploration (all of these things interest me greatly).

Recently Respawn held an event that allowed games media to play some of the game where some more light was shed on the above concepts as the media were allowed to actually experience them for themselves.

Just this past week Respawn confirmed that Star Wars Jedi: Fallen Order has gone gold which means that it’s off to be manufactured and for certification and is content complete. While I’m sure the game will have a day one patch (few games don’t these days) it means were less than a week away from finally finding out if EA and Respawn can make good on the promise of having a truly great Star Wars game this generation. EA knows their contract expires in about three years and the pressure to deliver to not only consumers by their shareholders has to be immense. I guess we will find it on November 15, 2019.