Without a doubt, Titanfall is going to be one of the the most fun-filled and action-packed first-person shooters you will play this year. But is there enough depth to sustain and breathe life into this brand new IP from ex-Call of Duty creators, now called Respawn Entertainment?

First-person shooters are my jam. They’re all I really play. So, when I sat down to play Titanfall inside a retrofitted LA studio decked out with Titanfall-themed decals courtesy of EA, things clicked right away, despite it being an entirely new experience. We’ll get to what sort of implications that may hold in a bit.

We played a mixture of three game-modes; Attrition, Hardpoint Domination, and Last Titan Standing, in what we were told was the beta build of Titanfall. Side note: it looked and played pleasantly smooth for a beta build with little to no apparent bugs, at least that I experienced. Attrition and Hardpoint Domination are your standard FPS game modes that task you with either scoring the most kills as a team, or capturing and holding up to three different objectives the longest, respectively. New to us, however, was the game’s one-life-to-live mode, Last Titan Standing. Really, you have two lives to live; one life as a Titan, and one life as a Pilot, the two playable archetypes that define Titanfall’s unique gameplay. After surviving for as long as possible inside your Atlas Titan, the only Titan of three that was available to us in this build, your shields and health eventually whither down to a sliver as you eject high into the air as a Pilot. From then on, you’re on your own to take down enemy Titans and Pilots on foot with your arsenal of anti-Titan and anti-infantry weapons. The last man or woman standing wins the round for his or her team.

What was surprising about Last Titan Standing in particular was that it highlighted Titanfall’s remarkably balanced Titan vs. Titan, Titan vs. Pilot, and Pilot vs. Pilot gameplay. Each theater of war plays out in its own very different way, but due to the specific strengths and weaknesses of both Titans and Pilots, it keeps everyone on an even playing field. Keep in mind, however, that we were only given access to once class of Titan and one Pilot weapon from each weapon class, so we’ll see how the game’s balance holds up once players get their hands on more weapons and more Titan classes. In the end, I don’t doubt the experienced men and women of Respawn’s highly talented team to get it right.

During the play session, the Respawn team introduced us to Burn Cards, special abilities that only last for the entirety of one life while in-game, meaning you better make that life worth it. You can equip up to three of these cards, ranging in abilities that cut short the time it takes to call in your Titan, supply you with an improved version of certain weapon types, or earn you extra experience points. Upon death, you can choose to activate one of these three cards whose ability will be applied to your soldier in his or her next life. They encourage players to stay alive for as long as possible because once you die, that card or ability is lost forever, or at least until you earn it again. Burn Cards are awarded by completing in-game challenges. 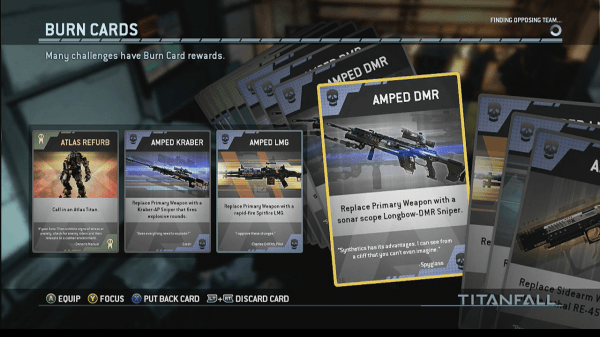 Despite Titanfall’s 6 vs. 6 player count, there was no shortage of adrenaline-pumping action and unbelievable “wow” moments that would give Battlefield 4’s “only in Battlefield” moments a run for their money. The AI is really just there to keep the action going in the game’s slightly larger than average multiplayer maps to accommodate the larger-than-life Titans, and they do a good job in that regard. Available to us were two contrasting maps; Fracture and Angel City. While Fracture was a bit more open in concept, giving Titans plenty of room to maneuver, Angel City provided a playground of opportunities for free-running Pilots to wall-run and double jump up to higher vantage points.

So far, Respawn has demonstrated that throwing these towering Titans, nimble Pilots, and easy-to-kill AI all together in a cooking pot yields an exciting formula that is accessible, easy to play, and most of all, tons of fun. But, as I alluded to earlier, that’s also where I get a tad bit worried. I don’t want fun to be the only thing that Titanfall ever ends up being. It’s not a bad thing, per se, but while Titanfall’s initial appeal will undoubtedly have no trouble turning heads and luring in masses of FPS fans, I worry it won’t have the depth or learning curve to sustain a healthy community. I get the feeling that, after adjusting to the more acrobatic player movement and learning how to pilot a Titan, anyone with an average amount of background in first-person shooters will get Titanfall almost instantly. And while the inclusion of AI keeps things rolling, it takes away that drive for new players to want to improve when they already feel like a badass 90 percent of the time taking out dumb-as-nails AI. Add to that Titanfall’s casual, pick-up-and-play nature, and it all of a sudden becomes more comparable to a mobile game, rather than a triple-A shooter that you’d want to sink hours and hours into. 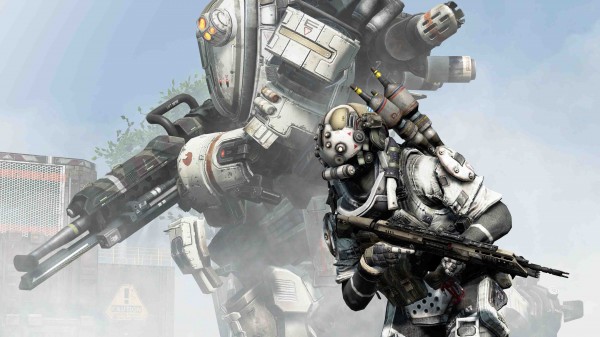 It’s clear that Titanfall is going to be a game for everyone, but I hope Respawn is able to deliver a shooter that more experienced vets will take seriously and won’t brush off as a casual pastime.

But don’t take my word for it. You’ll be able to see for yourself when you get your hands on Titanfall’s Xbox One and PC beta Friday, February 14.

Also, be sure to catch our exclusive Xbox One Titanfall gameplay right here.

Titanfall launches on the Xbox One and PC on March 11, exactly two weeks later on the Xbox 360.