I’ll admit right away that I never truly gave Crash Team Racing a shot back when it originally launched on the PlayStation console. I was too involved with Mario Kart to care, and I honestly thought it was just a cash grab to try and cater to that fan base. I was much younger then, and if I could go back in time and slap myself for thinking that way, I would.  It would take several years later that I gave the game a chance and while I never got to play much of it, I thought it was a very awesome racing game. Suffice to say, when a remake of Crash Team Racing was announced, this time I took notice. So without further delay, the game has released and we are off to the races to see just how exciting this one turned out.

Crash Team Racing is a remake of the original game, with levels also from the semi-sequel Crash Nitro Cart that released years later. Upon starting the game players are offered a few choices to choose from. Adventure mode, which features a hub world, and storyline involving an alien invader challenging all the Crash characters into a tournament that will decide the world’s fate. It’s silly, but it’s great to see these sort of storylines and set up in kart racers. Diddy Kong Racing did this as well and I’ve always felt it’s extremely charming. More kart racing games should imitate this whimsical adventure feel.

Other modes include arcade, allowing to choose single-race tracks, circuits, and additional challenge modes to select from.  Everything that can be played in the storyline is selectable here but in a more digestible way. Last but not least is the online mode. Take to the internet and destroy friends or strangers online in seeing who can lead the crash pack to victory. Getting left in the dust never felt better. 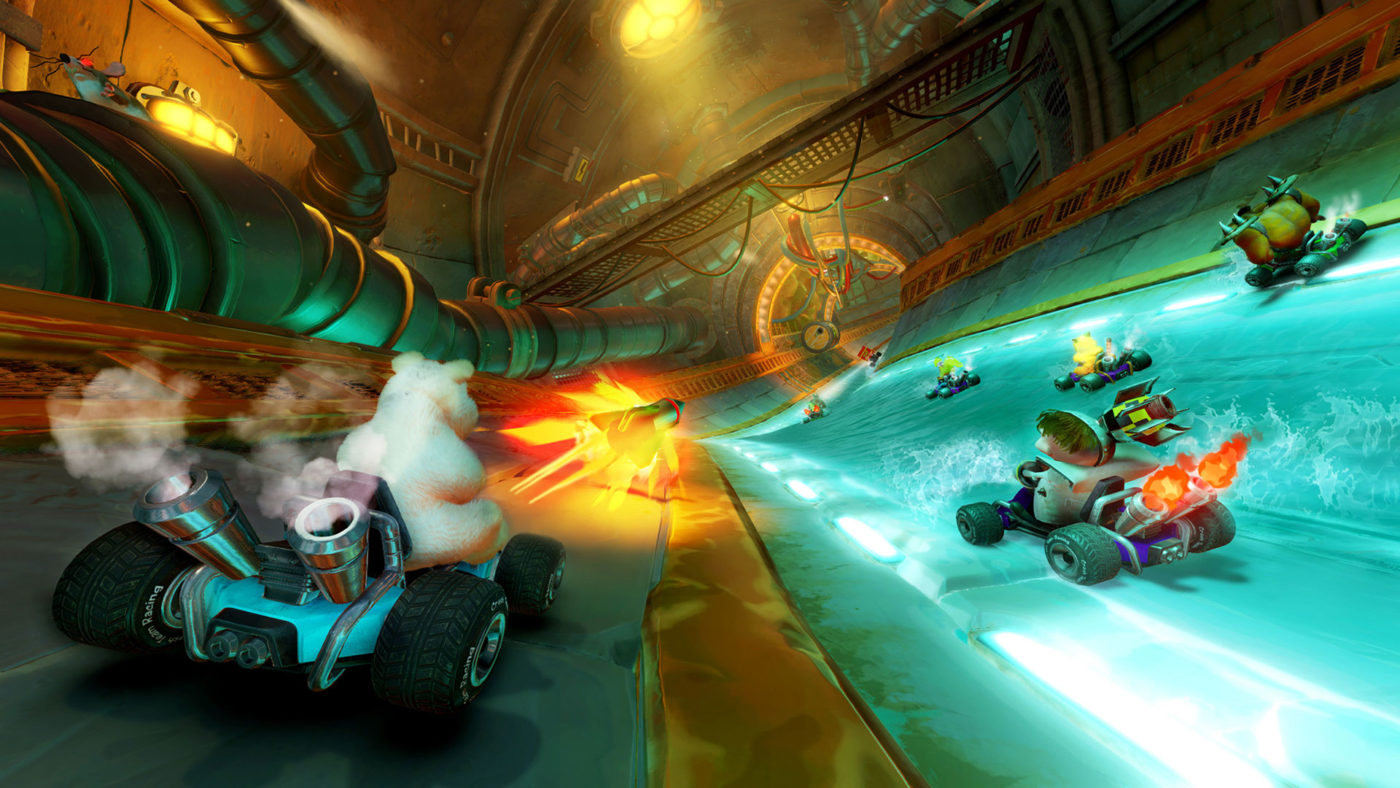 Vroom to the Finish

The first thing I noticed upon booting up CTR and jumping onto the race was the sense of speed. Driving the karts around provides such a thrill, as characters go speeding through the levels and the colorful backgrounds go whizzing by. That goes along with the outstanding visuals they created and used to recreate these classic tracks and characters. With so much variety, colors, and settings, the tracks are something to take notice of. If we all thought CTR looked fantastic back when it originally launched, this game truly brings the visuals to life and then some. That feeling of thinking back fondly on an older game, remembering it for its vivid visuals, and then only to see how dated they look often can lead to disappointment. CTR doesn’t fall into the same pitfalls (thankfully), and it truly shines in this remake re-inventing those graphics, truly bringing them into an almost CGI animation look that we all probably thought the original looked at during its release.

Of course the most important aspect of any racing game, regardless if it’s an arcade or sim-like experience, would be the controls. Controls can make or break a racing experience and I’m happy to say CTR controls like butter. Accelerating, breaking, turbo boosting all feels easy to use and perhaps a little tough to master. Particularly as the boost mechanics are a little different than what I’m used to. Using either a meter or the visuals indicator of black smoke off the kart, as sliding players need to tap on the other power slide button to stack the boost. Practice makes perfect though as this is essential on mastering and winning tracks. It took me a bit to get adjusted but soon I was power sliding and boosting like a pro, granted that still didn’t make for an easy victory. Learning the tracks and the shortcuts go a long way to getting the upper hand.

Now let’s talk about one of the biggest issues and criticisms that most will likely run into depending on their skill level.  The difficulty in CTR racing is a bit tough, I’m not going to lie. I began my adventure on medium settings and before I knew it, I was losing races left and right. I believe this challenge is present for a few reasons. The racers seem at times to suffer from that particular AI rubber banding feel and also sudden weapon firing that seems to persist in a lot of racing games. What that means is players could be having the best race of their life on a track and suddenly before the finish line, a barrage of bad luck plays out. Now in some cases this wouldn’t be the worst thing to deal with, but in CTR it makes things more difficult as players have to finish in first in order to win the race and open new tracks in the adventure mode.  I can’t being to describe how frustrating it feels to be having an excellent run only to have it failed at the last minute. This sort of sums of my experience with the game overall. That’s not to say it ruins the game, and an easy mode is available, but it’s made for both frustration and oddly enough satisfaction. See when players do find themselves playing a track over and over and finally nailing first place, it’s one of the best feelings in the world. 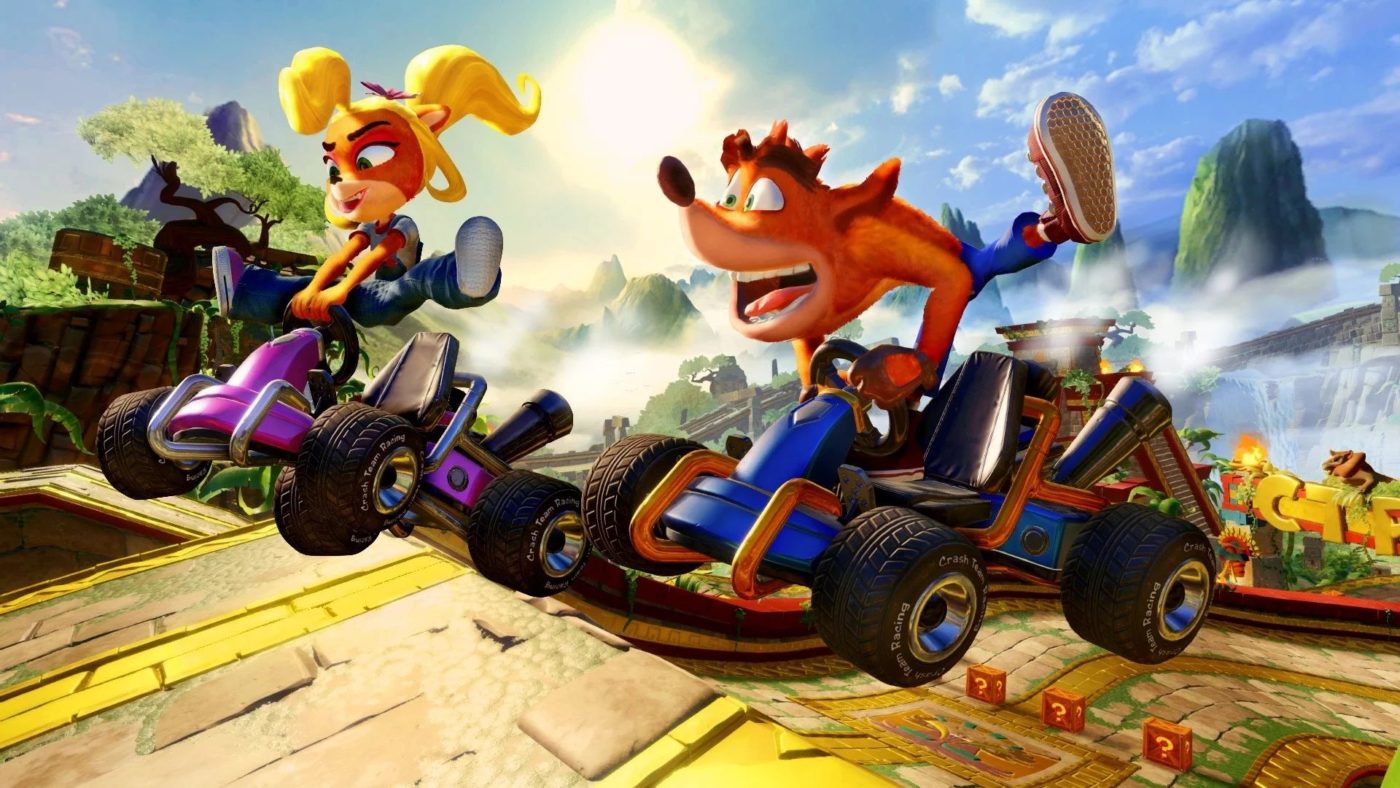 We have seen a lot of remakes come out over the last few years and most of them have not only stayed true to their original work but only made it better. Crash Team Racing can gladly sits upon that roster of games that have been a joy to play and a remaster worth having. There is a lot of content here to get through, along with the arcade and online modes to offer even more play time.  While difficulty can be somewhat of a damper at times, it doesn’t put a huge blemish on an otherwise excellent kart racer. Instead it’s just a little ding on an otherwise very polished racing title. CTR proves that the series fundamental design always had a special place in the kart racer world and even today, it still shines.

Review code provided by the publisher.Played enough races to see Crash in my dreams at night. Played on both PS4 Pro and Nintendo Switch. You can read MP1st’s review and scoring policy right here.