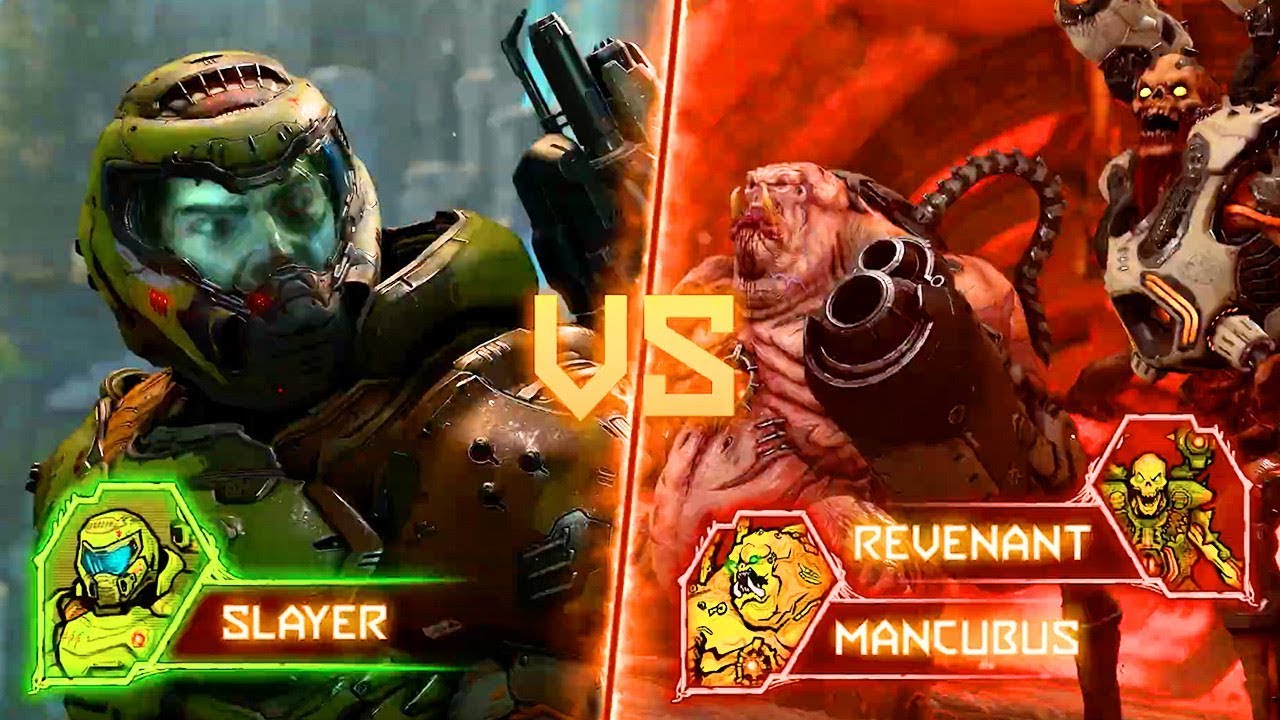 Bethesda Softworks has released a brand new trailer filled with DOOM Eternal Battlemode info. Battlemode is the brand new multiplayer game mode coming to the franchise with DOOM Eternal, pitting one player-controlled Slayer against two player-controlled demons, each with their own core components that work with each match’s mechanics. Check out the trailer below and read on for more details.

When DOOM Eternal launches on November 22, 2019, Battlemode will come with six playable maps, and five playable demons. Over the course of time new demons and maps will be added to the mode for free, as well as other features based on player-feedback from their experience with the mode. Bethesda has been keen to get the message across that they are building upon this mode to suit the way fans want to play it, and while they have a plan for what they’d like to release for it, they will adapt to what the community tells them.

The playable demons who will face off in pairs against one Slayer in each match are as follows.

The Revenant is the most versatile demon in the roster. Using jetpacks players can traverse the map quickly, getting right on top of the Slayer. Shoulder-mounted rockets deliver consistent damage, and the special attack, a targeted rocket barrage, deals long-range damage, and lots of it.

This demon can fly over the map, making it easy to locate and keep track of the Slayer. Players can utilise the Pain Elemental’s targeted single shots, or charge them up for a burst attack. Flying puts the demon at a disadvantage, making it an easier target for the Slayer. But a rechargeable soul shield offsets this disadvantage by providing limited-time cover wherever the demon might be.

This is the biggest demon in the roster, with the biggest pool of health, but also the slowest. Heavy cannons and flamethrowers will make short work of the Slayer if players can back them into a corner. Slow mobility is made up for with a smoke bomb that obscures the Slayer’s view, allowing the Mancubus to hide and sneak up behind them for a lethal close-range attack.

This demon’s abilities haven’t been revealed yet, but it will most likely be a close-combat demon that specialises in quick successive attacks on the Slayer.

This demon’s abilities also haven’t been revealed yet, but it will probably be a heavy melee specialist that focusses on dealing big hits to the Slayer, whilst staying back and letting smaller enemies keep the Slayer at bay when not attacking.

Every demon in Battlemode has the power to drop map hazards in addition to all of their own abilities. These hazards range from areas of damage that force the Slayer to move, to summoning various combinations of smaller demons to hunt down and attack the Slayer as they do in the core campaign. Players use a new system called the summoning wheel which makes it quick and easy to both select and drop hazards on the map.

In each match there will only be one Slayer against two demons, indicating how powerful this role is. Slayers have all weapons, mods, and equipment from the DOOM Eternal campaign at their disposal, making them extremely lethal. Slayers need to manage a lot more than player-controlled demons in Battlemode however.

In addition to hunting down the enemy, Slayers need to keep on top of their health, armor, and ammo by performing the correct type of finishers on smaller enemies. If a Slayer isn’t careful, they could find themselves without enough ammo to keep fighting, and quickly lose all of their health and ammo when caught looking for it. Enemy players have a rechargeable ability that blocks these resources for a short period of time, and when used correctly they can seriously harm a Slayer’s progress.

Should Slayers break line of sight with enemy demons for long enough, they’ll disappear from the map. This allows Slayers to move around undetected, laying traps for player-controlled demons, or simply lying in wait for them to walk past at just the right moment. Each arena also contains two portals at the furthest points from each other, which Slayers can use to teleport away from one area if things get too intense. However, demons can use this to their advantage by dropping hazards at portals if they suspect the Slayer will use one.

When the Slayer kills one demon, a 20 second respawn timer begins for them. If the Slayer doesn’t kill the second demon before this timer ends, the demon that was just defeated will respawn with half their health. As you can imagine, this adds an extra level of strategy to the match for both sides. Demons should work together to ensure they kill the Slayer as quickly as possible, but if one of them dies then the other should hide until the respawn timer ends. Slayers need to focus on whittling down the health of both demons so that they stand a chance of taking both down within 20 seconds of each other.

Between matches players choose abilities, upgrades, and even super weapons such as the BFG for Slayers, or the Baron of Hell for demons, to use in the next round. With some matches consisting of five rounds, one win can be the difference between total failure, and a comeback.