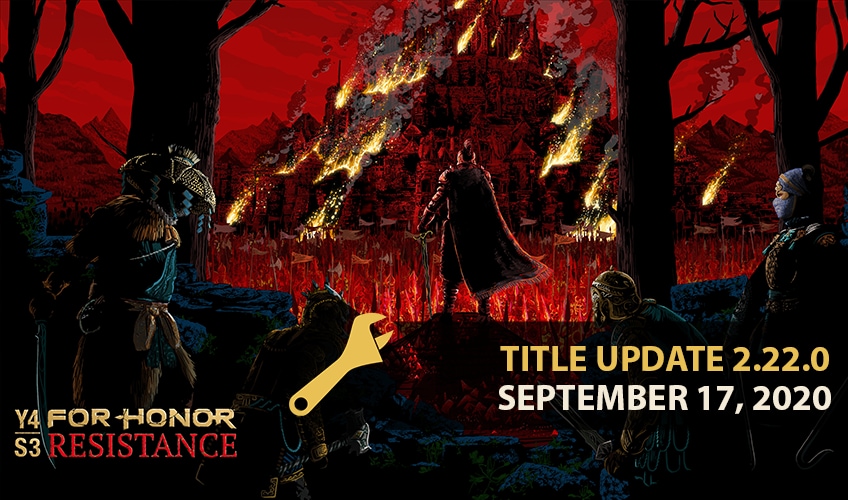 Warriors, Ubisoft has released the For Honor update 2.22 September 17 patch, or what the studio calls the Year 4 Season 3 (Y4S3) “Resistance” patch, and is also internally tagged as the 2.22.0 patch.

This title update brings a new map, bug fixes and more. Head on below for the file sizes and patch notes.

Developer’s Comment: Time to bring your hero’s customization to the next level! No more distinctions between Attacker, Defender or Neutral colors: you can now wear any color palette you want, no matter which team you are in!

To support this update, we’ve made major changes to the User Interface. You will always be in the blue team following this patch. This smoothens identification: blue elements are always your team’s; orange elements are always the enemies’. We’ve also added an outline to your teammates so you can spot them in the blink of an eye on the battlefield and plan your next moves.

Please visit our blog post for more details on this update!

Developer’s Comment: Sentinel is the map that introduced Ballistas into PvP gameplay in For Honor. Its original design intent was to maximise the use of the Ballistas on the battlefield. Although it provided a very unique experience compared to other maps, it over-relied on camping strategies and navigation between objectives became secondary. With this update we wanted to bring speed and ease of navigation between objectives back to the forefront. It wasn’t our intention to simply remove the Ballistas but make them less attractive as a main strategy.

Capture Zone A was not only one of the smallest Capture Zones in the game but also one of the most dangerous ones, with a prominent ledge and in direct line-of-sight from a Ballista. The back area of the zone was also very underutilized. The new open space allows Players to further distance themselves from the ledge and now provides added cover from the opposing Ballista. The other important change is that the run-distances between the Mid-Lane and Capture Zone C have been shortened considerably by moving the capture area to the entire first floor. Which in turn, no longer allows Players to interact with the ballista on the 2nd floor while still holding the zone. Our aim is to have the Ballista be a choice to consider and not a default action. Up until now, those who were using the ballista but no longer had any targets in sight, felt trapped on the 2nd floor with no easy means to move on to another area. This is where the newly added ziplines come in handy. Enjoy!

Developer’s Comment: We’ve made Orders accessible from anywhere, as it can be useful to have a reminder of what you need do to complete your currently selected Orders before or even during a match. Please note that Orders will not progress in the menu while a game is ongoing as the update is done at the end of the match.

If there are any changes not mentioned in the patch that you see in-game, let us know down in the comments.