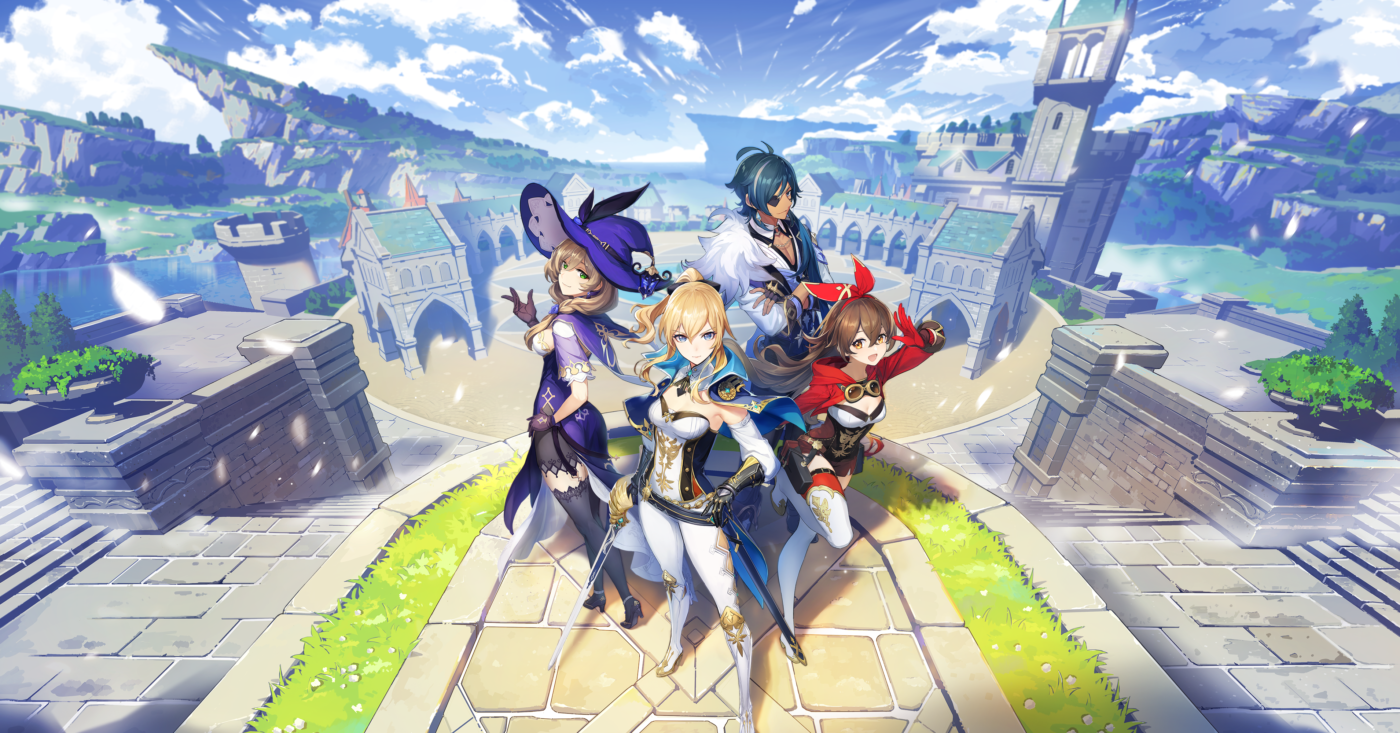 Let’s get the record straight: I’m not a huge fan of free-to-play (F2P) games. Not in the sense that I dislike playing them, but more on the fact that I can never find a gripping F2P game. Sure, we have Fall Guys, League of Legends, and quite possibly one of the best games of this generation, Fortnite, all free-to-play, all top quality gaming experiences. But when I (naively) think of “free-to-play,” I think of gaming experiences that just couldn’t make it to the finish line. I’d think free games were just games that the developer thought wasn’t good enough for consumers to spend money on. Now, when I caught wind of Genshin Impact, it looked like an anime rip-off of Nintendo’s Breath of the Wild. Really pretty to look at, but cautiously optimistic it contained enough substance to keep myself and others enthralled. After spending nearly 30 hours, it’s suffice to say that this “anime ripoff” freakin’ rules.

As mentioned above, Genshin Impact is a free-to-play RPG on PS4, PC, Mac, and mobile. Developed and published by miHoYo, the game takes place in a fantasy world called Teyvat. You choose between two siblings (boy or girl) for your main character, while the other seemingly gets captured. Stuck in this strange new world, you’re tasked with finding your missing sibling, but as the way for any RPG you discover there’s plenty afoot in the world of Teyvat.

Most RPGs have a team-building concept and Genshin Impact is no exception. You can create teams of four characters, preferably with different elemental abilities to combat any type of enemy. Think of Pokémon and how you wanted one of every type on your squad. In Genshin Impact, there are six different elementals: Anemo (Wind), Pyro (Fire), Cyro (Ice), Electro (Lightning), Geo (Earth), Hydro (Water), and Dendro (Nature). According to math, you’d have to sacrifice three elements for your team. In addition to the different elementals, each character possesses different fighting abilities as well. The main character (referred to as Traveler) is a single-handed sword user. Some characters use bow and arrows, spell books, spears, or two-handed swords. Not only do you want to build a balanced team with the elementals, but also with the various fighting styles. 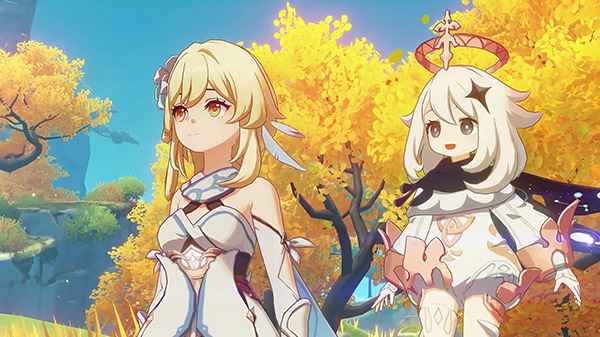 Throughout your journey in Genshin Impact, you acquire many different types of currency. Some are used to buy various food or cooking ingredients, while other types are used for wishing. Wishes are Genshin Impact’s version of a loot box, essentially. You can purchase single wishes to obtain weapons or even new characters. It’s worth mentioning that purchasing a bundle of 10 wishes guarantees you a level 4 weapon or character, so you’d be better off saving up.

The beauty of Genshin Impact stems from the fact that everyone is completely original. It’s not based on any manga or anime. So for anyone debating about jumping in because you aren’t familiar with the world or characters, don’t worry — no one is! After the Traveler finds him/herself in Teyvat, a floating creature by the name of Paimon becomes your guide. Think of Navi with Link and that’s Paimon. Paimon explains there are seven nations in Teyvat, all ruled by seven different gods collectively known as The Seven. The story begins with the Traveler running into Amber, an Outrider of the Knights of Favonius. Amber explains that an evil dragon named Stormterror has been terrorizing the city-nation of Mondstadt, so naturally, you agree to help defeat the beast. Overall, the story is wonderfully told and makes you care about what happens to these people. Even if you’re a stranger in this world, you try to protect it best you can. 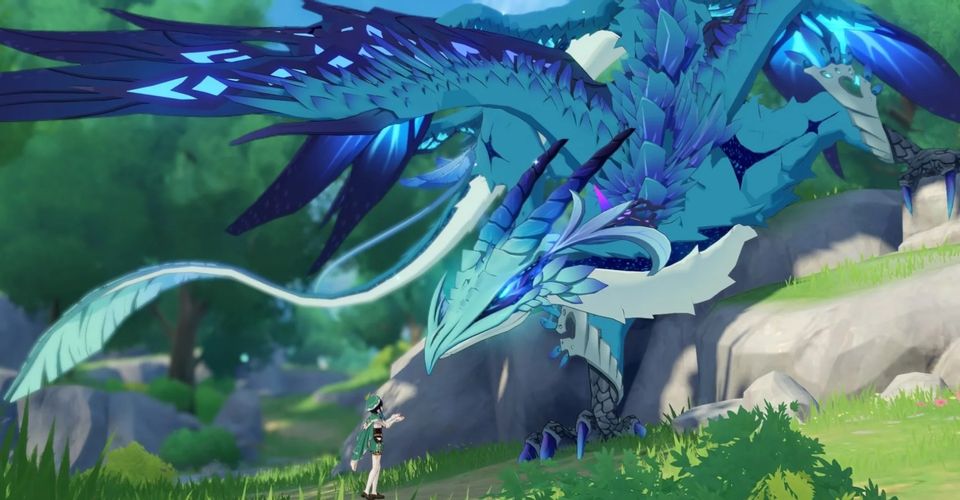 Like I said before, Genshin Impact’s biggest comparison is Breath of the Wild. You have the ability to run, swim, and climb any surface, which will result in the stamina bar decreasing. Unlike Breath of the Wild, there is no weapon degradation. I was one of the few who really hated weapon degradation in Zelda, so not having to worry about that in Genshin Impact was much appreciated. The combat in Genshin Impact flows beautifully. While there’s about a three-second cooldown, you can swap characters at ease mid-battle to string together elemental combos for maximum damage. You have to fully utilize each member of your team to take down certain baddies, so being able to form a solid group of complementary abilities is the key to success.

There are two separate areas of which you level up: character level and Adventure Rank. Character level is raised through defeating enemies and also by finding certain items that give substantial experience points. Character level is broken up and capped in a tier-like structure. Initially, there is a level cap of 20, but by acquiring certain items you can “ascend” a character, essentially breaking through to the next level tier. Adventure Rank XP is different than regular character level XP, and can only be gained by completing missions, opening chests, and discovering fast-travel shrines. It’s very important to raise your Adventure Rank, because much of the main campaign missions are blocked by Adventure Rank restrictions. The only downside with the Adventure Rank being tied to main campaign missions is the high amount of grinding you have to do in order to level up your rank. There will be times where you’re “stuck” in between main missions, so be prepared for some amount of grinding.

The sudden emergence of Genshin Impact is one of the best feel-good stories of 2020. Coming out of nowhere, this game has redefined the expectations behind the free-to-play genre. The fact that this massive RPG is free-to-play is simply incredible to me. I’m still waiting for that other shoe to drop, someone to pull the plug and yell “jokes on you!” Not to mention, there’s a free battle pass you can work through if you’re stuck in between campaign missions. Genshin Impact presents a beautiful world filled with terrifying creatures, amazing dialogue, and a well-done character progression and build system. Add in the near flawless combat system and the ability to explore anywhere, Genshin Impact needs to be recognized as a potential Game of the Year candidate.

Played on PS4. You can read SP1st and MP1st’s review and scoring policy right here.