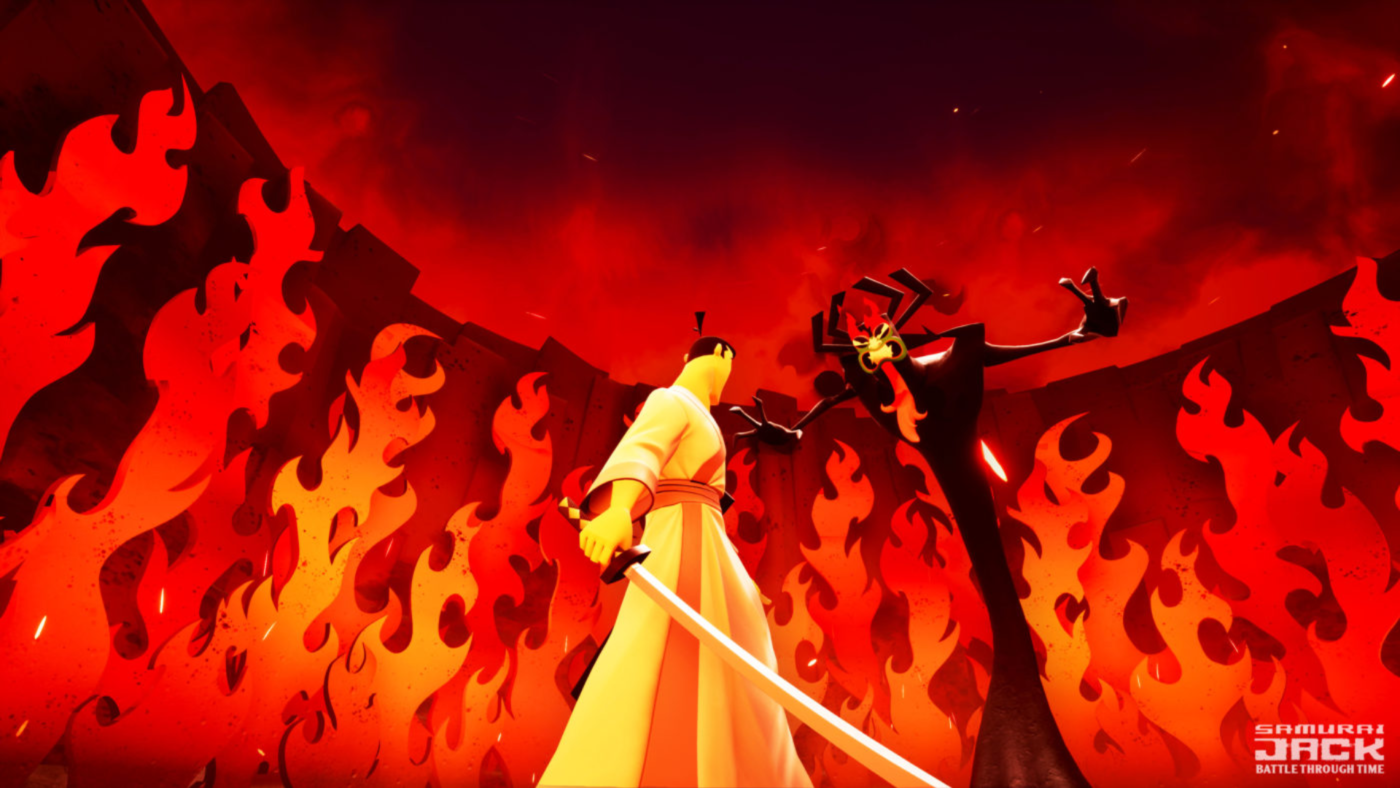 It’s been many years since the foolish samurai warrior wielding a magic sword stepped forth to appear in a video game all his own. With the renewed interest the series has garnered after it was resurrected by Adult Swim to finish the epic tale of Samurai Jack’s quest to vanquish Aku, the Evil shape-shifting Master of Darkness, we get another shot to step into the time traveling samurai’s sandals. Adult Swim has overseen several of their properties turn into solid video games, so how did this time traveling throwback turn out? Read on for our Samurai Jack Battle Through Time review!

A Hack and Slash Bash

It might not be a surprise given the nature of the source material or our protagonist, but Battle Through Time is primarily a combat focused outing. In the context of the show, Samurai Jack is a master of multiple forms of armed combat, from axe throwing and archery. Though his primary weapon of choice is the essential Magic Sword, a katana that shares some characteristics with the Master Sword from The Legend of Zelda in that it never dulls, never can break, and is capable of destroying evil. The game leans on all of this mythos to develop what this reviewer would describe as a well done forward looking hack and slash adventure that still suffers from some of the tropes and shortcomings of the genre.

In addition to the aforementioned magic sword, you can also switch between bare handed Kung-Fu as well as various types of clubs, rods, hammers and axes for melee weapons; and throwing stars, knives, electro-mines, a bow and various types of arrows, handguns, and automatic machine guns for ranged weapons. Everything except your fists and magic sword deteriorate and break, so you’re also constantly picking up drops from enemies or treasure chests, including buying items that are for sale at Da Samurai’s pop up shops throughout the levels. Narratively it doesn’t make much sense to not use an unbreakable katana exclusively but in the context of gameplay the variety of weapons adds a fun sense of variety to the combat. Most of these weapons have distinct qualities to them that affects how they deal damage to different enemies too.

Other factors are the games occasionally confusing character progression system. As you go along you find no less than three types of collectables that contribute to the different skill trees (combat abilities, non-combat abilities, and passive abilities.) Soul Fire is the base line and the most common, it takes a few thousand of these to unlock each new perk or ability on each of the three trees. You’re also collecting Bushido, or green balls instead of blue fire, which are more rare. Most of the abilities require a few hundred of these. Then the least common of all are the gemstones: rubies, diamonds and the like. There’s only a few of each of these in the whole game and they serve the double purpose of being necessary for some of the more powerful perks or abilities and being highly valuable for selling at the shop.

What this ends up meaning is that towards the end of the game you run out of notches to keep unlocking on the skill trees no matter how much Soul Fire you have left. I ended with nearly 70,000 Soul Fire, well more than enough to clear the whole rest of the board, but not enough Bushido or gem stones so I just sold the rest of the gems. Luckily, if you decide to just not fret over it and not worry about working to unlock specific things in the last third of the game, you can mostly ignore the three item skill economy as you buy upgrades.

It would not do this game justice to not mention what may be its two strongest attributes, art direction, and level design. This may be one of the best three dimensional realizations of a two dimensional property I’ve seen. The game perfectly replicates the look and feel of the cartoon with incredible visual fidelity. It is not cel-shaded, just excellently designed, textured, and lit three dimensional models. 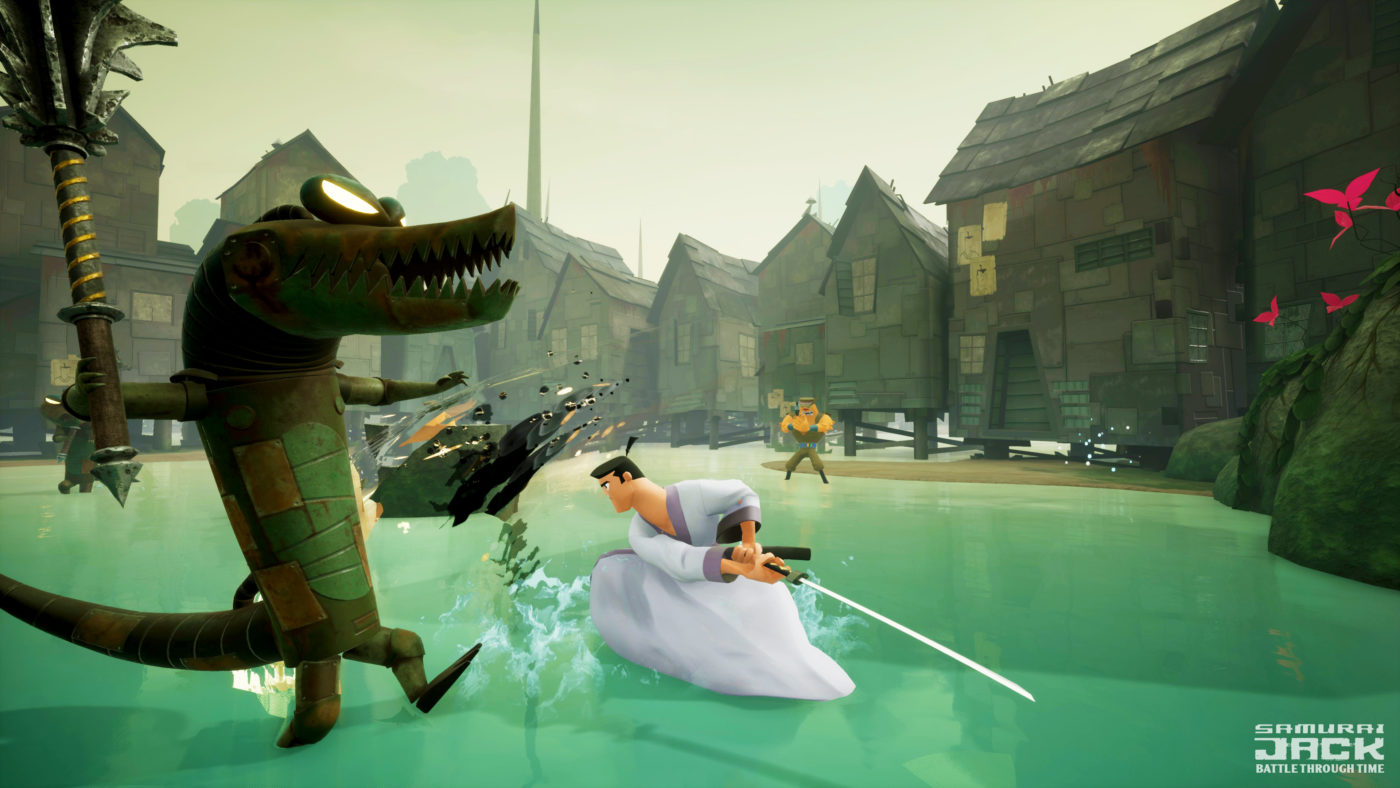 More than once I found myself shaking my head in surprise at how good I thought the game looked. I was playing on an Xbox One S and never once saw a visible dip in framerate, even when the screen was filled with two dozen enemies all flocking towards their doom. The lighting is especially good in Aku City and the Prison Ship (which was for me the clear stand out level all around), where the intentionally limited color pallets really accentuate the use of color in lighting. It may not be a Crytek game but there’s some really beautiful work done here.

In fact let’s talk about the levels for a little bit, doing our best not to ruin any story beats for someone who doesn’t know them yet. The game is split up into 9 levels, each representing a different story arch from the series. The story ends up being a fantastic structure for a game since it means that every level makes sense together, but none of them feel like repeats of each other. They’re all distinctive and varied and each feel like a chance to show off a different skill set of the designers.

To be fair, this game is essentially a series of arenas of various sizes with some fun low risk platforming or puzzle sections in between. The platforming is decent enough as Jack’s jump is solid and responsive. There’s also plenty of secrets to find hidden away. Whole areas require you to be looking for them to discover them and they always contain weapons or gems to collect.

This is a genuinely pretty game and the developers at Soleil should feel proud of that.

The Scars and Spoils of War

There was a thought that permeated my internal discourse as I worked my way through the nine levels of Battle Through Time. At first I thought it was a frustration with how linear it felt. But not everything needs to be a massive open world (though a Samurai Jack version of Ghost of Tsushima would probably be dope), and that faded as I fought the first level’s boss: a mind controlled version of Jack’s best friend The Scotsman.

After this opening, The Scotsman and his daughters, along with a couple of other friends from the series hang out in all of the levels offering Jack a bit of story dialogue and a fresh weapon or ammo bundle for ranged weapons. They just stand there, running a basic idle animation as if they had always been there. It makes sense in the context of the story but it also makes sense from the perspective I found as I kept pressing through the game.

Battle Through Time is a major throwback. Not just to the series but to licensed games of the past in general. Everything about the game, from the levels to the hack and slash gameplay, had a distinct sense of nostalgia to it: despite my not being among the initiated fans of the franchise. That’s because as much as this game is a throwback and retelling of several big points in Samurai Jack’s story, it’s also a re-examination and updated take on the classic licensed games from the early 2000’s. Back when every show or movie got a day and date game released to accompany it. 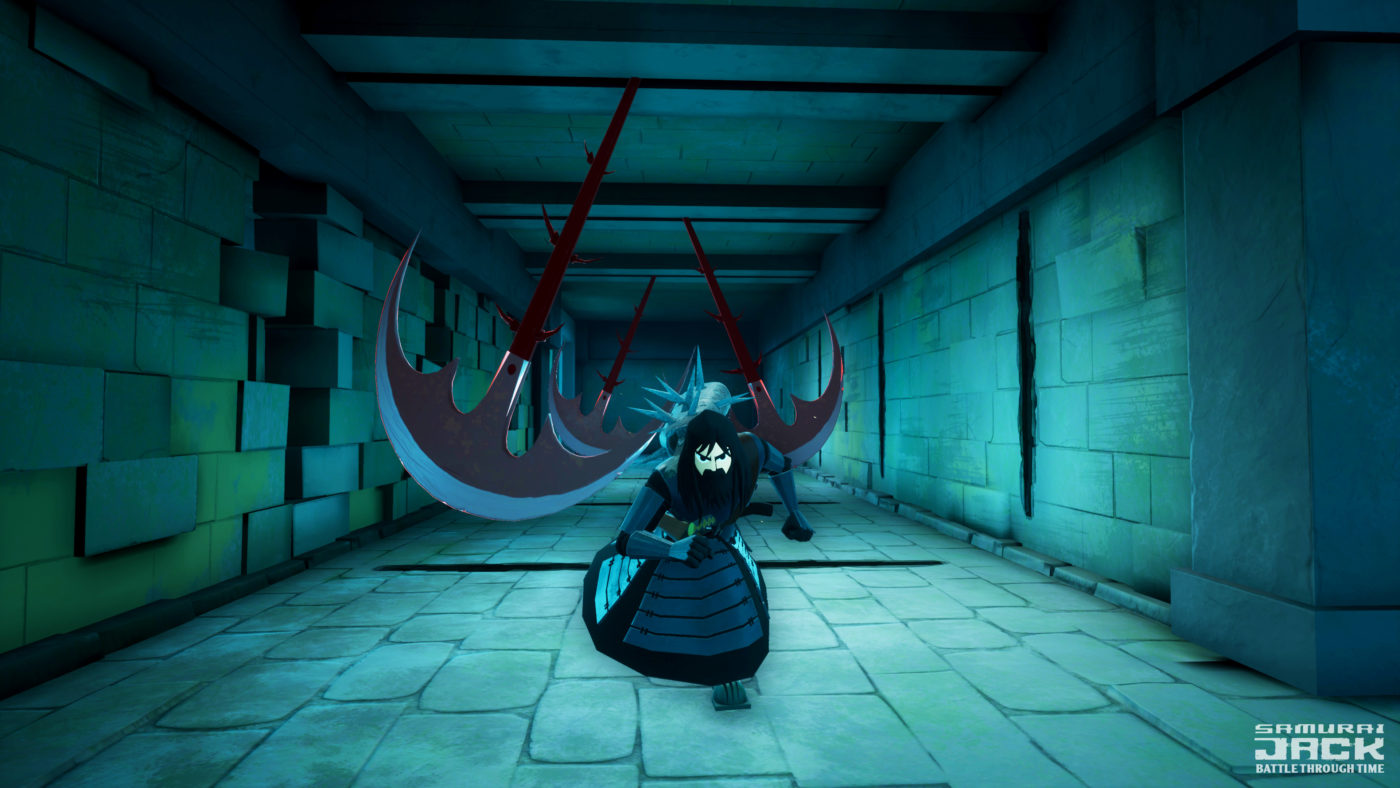 Now plenty of us will remember that most of those games were crap. But there’s also some sleeper hits in there that come to mind. Spongebob Battle for Bikini Bottom which just got a remaster itself, comes to mind. This game is an incredibly interesting take on a licensed hack and slash. It is somewhat derivative by nature but it still finds its ways of being unique and interesting.

In fact I’d go so far as to say some of the best and some of the most frustrating aspects of my time with this game can all be traced back to this throwback sensibility. For every time I got pinned down by two or three medium sized enemies using their staggering attacks back to back to keep me from getting up or I got myself stuck in a corner surrounded by a mob, I found myself feeling a rush of excitement finding a secret ledge with a treasure chest or landing the final blow to clear a particularly tough sequence while the camera spins around to show Jack’s furled eyebrow. 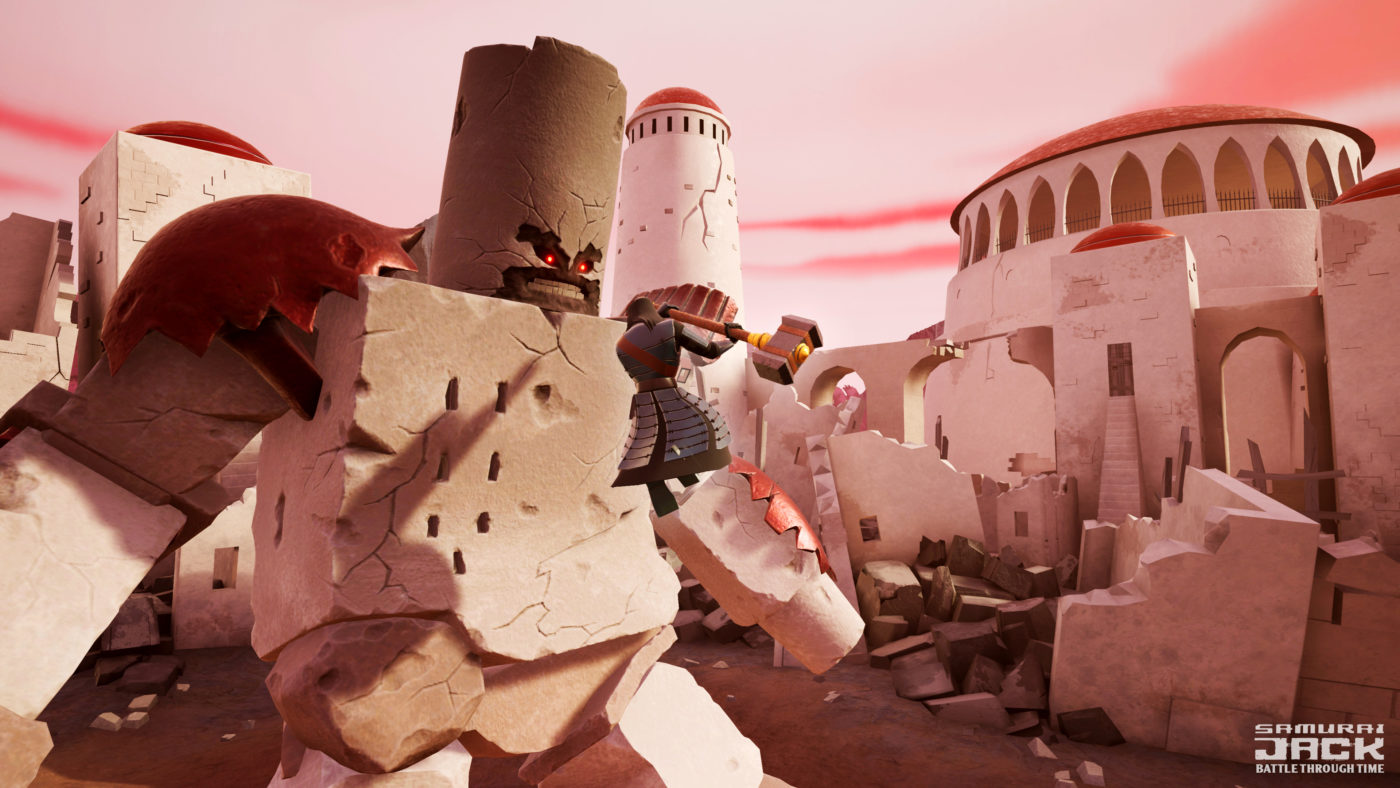 At the end of the road then, I’m stuck at an impasse. If you judge this game as a game, then it’s above average and a good time. If you are coming at it as a fan of hack and slash games or Samurai Jack as a franchise, then you’ll probably see it as a something you really should play if you can. Coming from a perspective of someone who doesn’t have a particular affinity for the franchise or genre I’m inclined to split the difference. Here’s a big huge toast to hoping that Cartoon Network gives this treatment to some of their other late ’90s early 2000’s properties; a modernized loot shooter set in the world of Codename: K.I.D.S. N.E.X.T. D.O.O.R. could be incredibly fun. But I digress.