Want a new fighter in Mortal Kombat 11? You’ll soon be getting that and then some. The Mortal Kombat 11 Kombat Pack characters release date, and full release schedule has been revealed!

Early today, NetheRrealm published their official livestream in preparation for the Kombat Pack reveal. As with previous leaks, users have been able to grab the video’s thumbnail confirming that both the Joker and Terminator will indeed be coming to Mortal Kombat 11. Unfortunately the original leaked photo was in low resolution that we could hardly make out what the release dates were. Luckily Twitter user, Icecreamkington managed to discover a hi-resolution picture of the image, confirming each character’s release date. 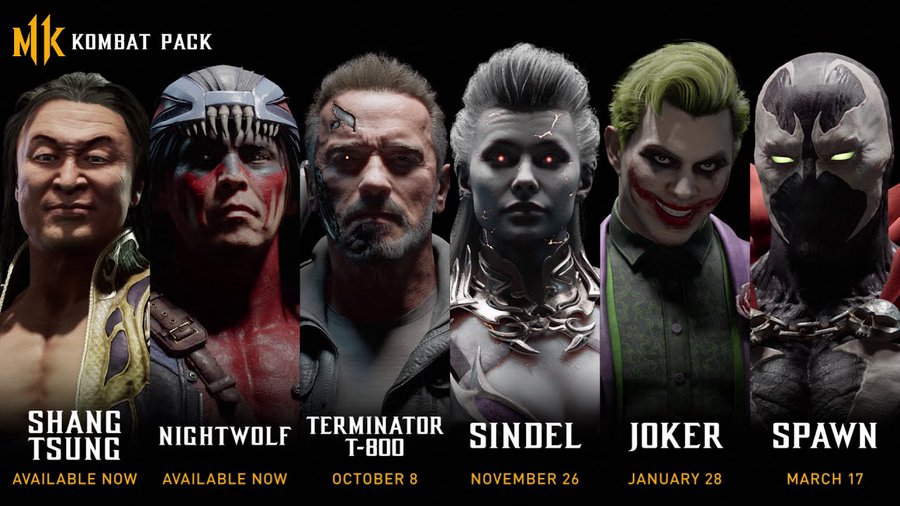 *HIGH RESOLUTION IMAGE*#MK11 KOMBAT PACK CHARACTERS:
• Shang Tsung
• Nightwolf
• Sindel
• Terminator
• The Joker
• Spawn
“the release dates of the characters are the worst. i don’t think fans will be pleased with this”@Dynasty1031 pic.twitter.com/eGfZxiQt8p

As you can see the next character will indeed be the Terminator, followed by Sindel, then the Joker and finally Spawn. As Icecreamjington pointed out, I don’t exactly think this will bode well for fans seeing that the releases are so far apart from one another. This was a major concern when the community didn’t get a single character for almost two months. I certainly think its a bad schedule as I can’t possibly see myself wanting to wait between now and then, especially for Spawn.

On another note it appears that they have decided to go with Arnold Schwarzenegger’s T-800 model from the Terminator series, though this one appears to be based off the old man version of it that’ll appear in the Dark fate movie. For more on the Terminator DLC, check out our article where we make arguments as to which Terminator model should be included.

Stay tuned for tomorrow for the official trailer!