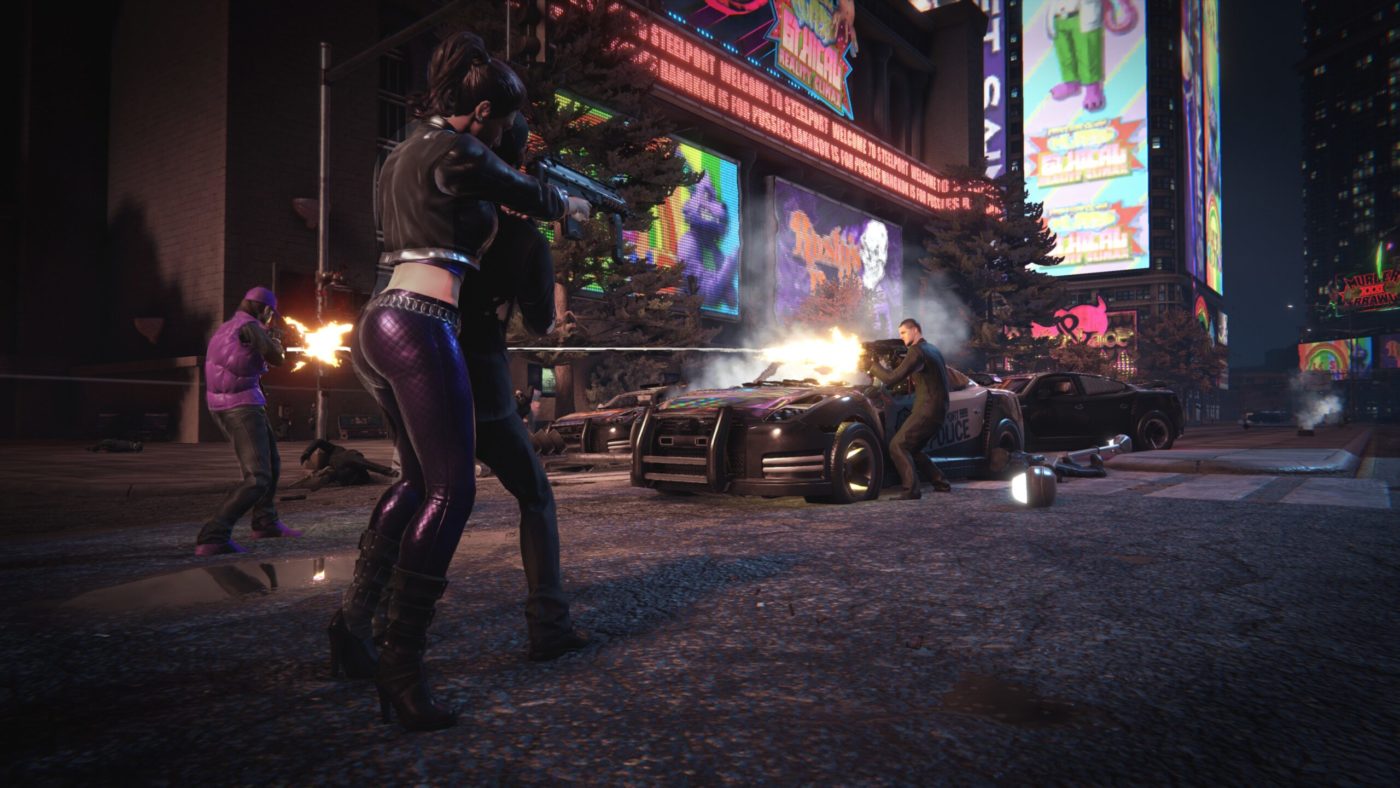 However, nine years have passed and Deep Silver has seen fit to give it the remastered treatment and include all of the DLC. As far as remasters go, it sure looks better; unfortunately little else has been improved. Read on for our Saints Row 3 Remastered review.

The Boys Are Back in Town

Right out the gate, I will say that if you absolutely loved Saints Row 3 the first time, you’re going to love this remaster. It’s the same game, only with much better lighting and improved textures. The most noticeable difference is when driving at night. With HDR enabled it looks fantastic. I did have to bump up the brightness a bit because without headlights (I crashed) it was really hard to see in the less populated areas of Stillwater.

Beyond that, however, it really does just look like the same last-gen game, only in higher definition. It’s not that I expected a remake a la Resident Evil Remake 2 and RE3 Remake, but it’s still a missed opportunity to me to really improve upon the base game. If you’ve played that game, you know exactly what to expect, character customization is back and it’s just as limited (in comparison to Saints Row 2) as it was before. In Saints Row 2, I was able to make a reasonable likeness of myself to put myself into the game. In Saints Row 3 the options for things like facial hair or even standard hair choices, feel less robust — especially in the facial hair department. I am well aware that this can seem like a nit-pick and maybe it is but it’s my nit to pick. If this doesn’t bother you, again, you can skip this review and go right to buying.

If It Ain’t Completely Broke…

Structurally I do think Saints Row 3 did improve in some areas over its predecessor, notably in how missions are selected. Rather than driving to a checkpoint somewhere on the map to accept and begin a mission, all available missions are accessible from your in-game cellphone. Just select the mission from the respective mission giver and you’re all set. You can absolutely put off other missions until you’ve leveled up some and have better stats and weapons. Once you’ve completed a mission you get cash and that cash can be spent on character upgrades, customizing your character, buying weapons and ammo or buying property. Buying property works as it does in similar games, helps you generate revenue. The more expensive the property, the more money it will generate.

One of the odder choices Saints Row 3 made was on how you get around the map. Early on you’re driving but not long after you begin the game you can take over a penthouse base with helipad where you can then get a flying vehicle and bypass driving almost entirely save for missions that still require it. And later in the game, you get an ability that basically makes cars obsolete. Sure, it makes it fun, but it also makes investing any in-game currency on customizing automobiles pretty meaningless.

The gameplay hasn’t changed a bit in this remaster and that also means it hasn’t aged well. It still controls well enough but third-person shooting has come quite a way since 2011, so it can make left trigger aiming, which isn’t always necessary, feel clunkier than I would have liked.

The Sounds of Stillwater

All of the audio remains unchanged as far as I can tell so the same songs are in the game so if you have a station you loved in 2011, it’s here for you in 2020. Another reason I preferred Saints Row 2 was because I found the music to be overall more to my liking with songs from The Dillinger Escape Plan and Paramore — no such comparable songs exist in Saints Row 3, which I again acknowledge is my thing and won’t really affect anyone’s enjoyment should the care about such things.

You’ll notice that I haven’t really touched on the story and that’s because I’ve always found the stories in the Saints Row games to be largely forgettable, and not at all what I come to the series for. Needless to say, the story is ridiculous, but mostly well-acted and presented. The humor remains of the dick and fart joke variety and for me, has always been largely hit and miss.

At the end of the day, Saints Row the Third Remastered changes very little other than provide a bump up in its aesthetics so if you loved the game nine years ago you’re going to love it now, regardless of anything I’ve said here. Unfortunately, time and distance haven’t made my issues with the original game go away, and playing it now made me realize just how much I think this franchise needs a massive upgrade for the impending Saints Row 5. This game was originally a massive hit for them and dictated the tone for the franchise going forward so I have little hope they will dial the ridiculous back.

A review copy was provided by the publisher for review. Reviwed on PS4.  You can read MP1st’s review and scoring policy right here.