Horror games are a dime a dzozen these days, and it has a sub genre all its own. There are horror games that rely on jump scares, some that are more surival horror in nature, and so on. Bloober Team has released The Medium, a horror game that has less in common with today’s horror games, though you can see the inspiration of some games (and TV shows) in it. The question is: Is this a spirit worth conjuring or better to be left among the dead? Read on for our The Medium review.

Voiced by Kelly Burke, you play as Marianne, a spirit medium who possesses supernatural abilities — a gift, or perhaps a curse since she was young, Marianne’s abilities allows her to see the world as two different realities; that of the living and that belonging to the unfortunate souls who refuse to move on. One day, while mourning of the recent loss of her foster father, Marianne receives a mysterious phone call from a man named Thomas, promising to explain why she has these abilities along with answers to questions she has long for. And thus, her journey to an abandoned worker resort begins, only as we know, it isn’t quite as abandoned as we thought.

Though despite what many may think, The Medium isn’t exactly your normal run-of-the-mill horror game, but instead one that see’s itself dive deeper into the phycological side of things. With just one jump scare, I never once found myself ever being “scared,” in the common sense that my heart was quenching with fear, but rather terrified by character’s performances and how disturbing and twisted the world of The Medium became as I ventured through.

There’s a big draw for the game when it comes to its narration presentation, with the character playing as “detective” trying to get answers as to why things are happening, with the world throwing everything it can at them. This includes a tormented winged monster (The Maw) that is brought to life by none other than Troy Baker (most known as Joel from The Last of Us). I don’t think I’ve ever felt so sad, yet equally terrifying of a monster that’s crying in pain while threatening that it wants to wear me as a skin coat. 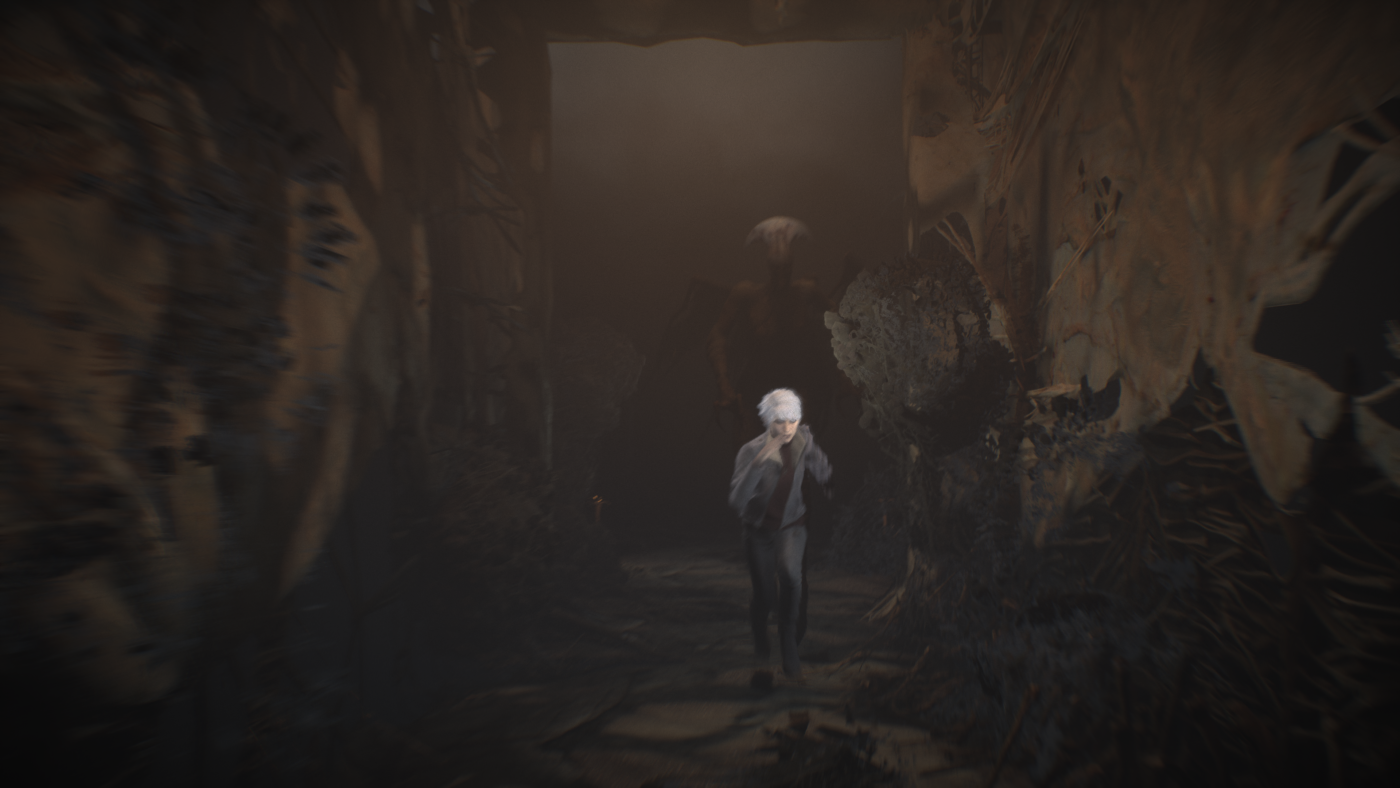 Then there’s Kelly Burke’s role as Marianne, which comes off as just as powerful at portraying her emotional range. I’d say all the characters are well acted, never one feeling out of place or phoned in and facial animations as with movements captured with motion capture really does show.

Of course these characters are only as strong as the writing itself, and while complex at time, the story of The Medium is one not to miss. The Medium does an excellent job at setting itself up as a detective mystery style of game. With the world being linear, Bloober wasted no space by cramming every bit of detail, all hidden with pieces of story throughout. Rarely do I find myself playing a game with the intention of wanting to collect every object, but because The Medium offered additional side story that wrapped into the main one, there was plenty of incentive to do so. With over eight hours clocked into the campaign, nothing felt rushed or unneeded, with my only disappointment being that it had come to an end.

Walking into the grim abandoned resort of Niwa, it’s easy to get caught in the beautiful atmospheric loneliness. The post-communism of Poland shows with it’s streets plagued of depression and environments devoured of all life from a bygone era. Yet despite that, I couldn’t help but feel an eerie presences lurking everywhere I traversed. As it turned out, there really was, and oh, was it ever so disturbing. 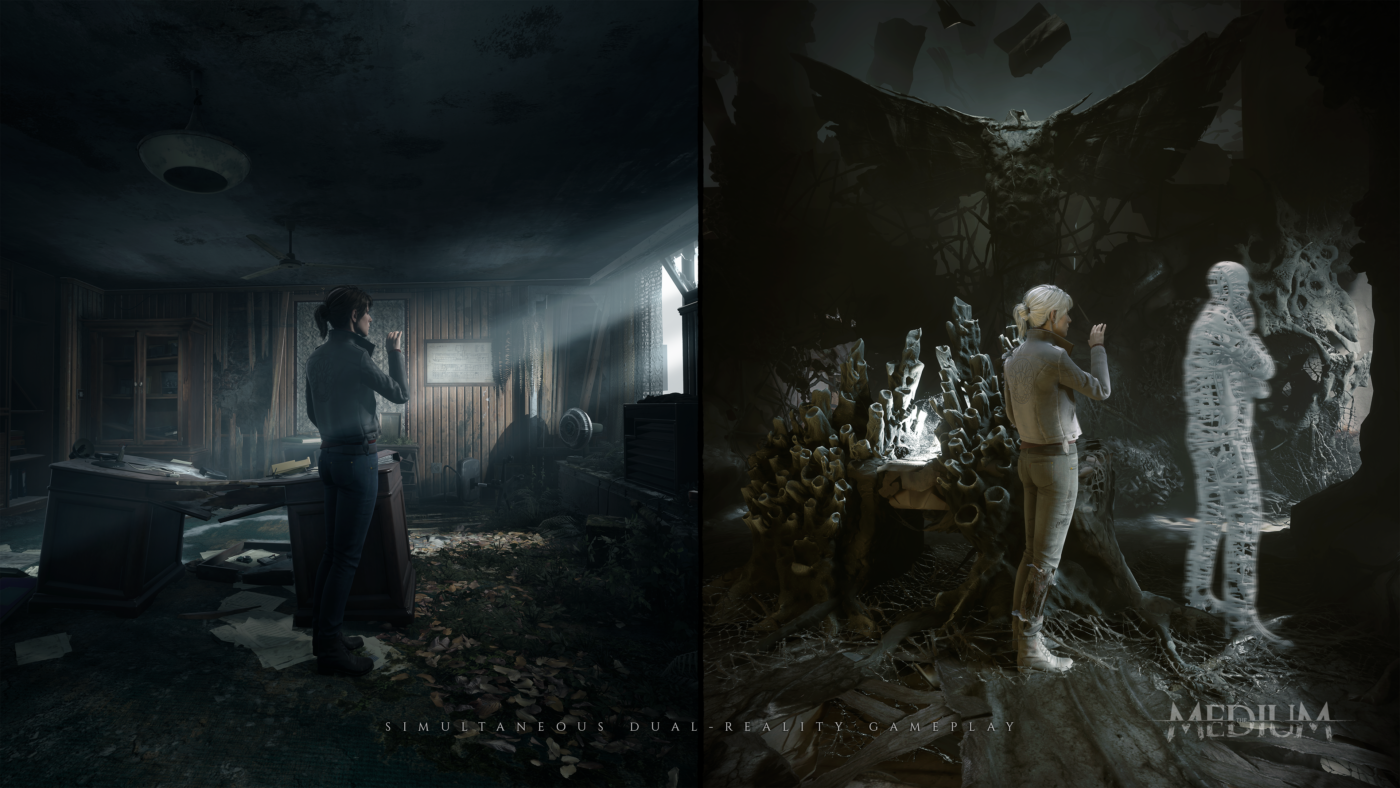 Touted as Bloober Team’s most ambitious game yet, The Medium gives players a taste of what it’s like to simultaneously play two levels, presented in what the team calls “dual-reality gameplay.” It’s a very cool idea if we say so ourselves, one that is clearly the highlight of The Medium, as it is masterfully executed.

While we searched around the abandoned resort for clues to solving a long haunting dream, happening alongside our venture was a twisted, warped alternative reality created from the living flesh and hardened bones of tormented souls. Akin to Stranger Thing’s Upside Down dimension, only more horrific because the monsters in this universe want to wear your skin for their overgrown bodies rather than turn you into mush (let’s be honest, we don’t want either). Truly the vision of a nightmare brought to life, yet one embalmed in such a beautiful artistic direction.

I’ve stopped many times during my playthrough just to adore the visual spectacle in The Medium. Details literally bleed from the walls, and variation in the lighting really helps bring the feeling of the scene to life. It honestly is one of the best looking games on Xbox Series X|S at the moment, one that makes a strong case of giving that next-gen feel.

This split reality isn’t just for show either, as core gameplay is centered around it. This being somewhat of a detective game, you’ll find yourself exploring linear areas, searching for clues that tell a bigger story. While yes, one could say its mostly a walking simulator with little to no beef in terms of actual combat, the change in playstyle (compared to other games) is certainly a nice one.

There are puzzles to keep the interest, some of which really make use of the dual-reality gameplay quiet nicely. An example of this is where in one reality the player is locked out from progression and requires the other to clear a path, either by opening doors or kickstarting electricity to panels. In some instances you could even have an out of body experiences where you solely control what’s happening in one reality, versus both.

Admittedly these were pretty easy with really the first one giving us a head scratcher due to learning the mechanics. Could there have been more and challenging ones? Definitely, but at least they kept the over all pace flowing. If there is a big detractor though in the dual-reality gameplay, then it has to be the general performance.

While graphically The Medium is stunning, there were some persistence issues, most notably with the way frames-per-second (fps) is displayed. While locked at 30fps on the Series X, there appears to be frame-rate pacing issues causing movements to appear jittery as if the frame-rate was dropping. A rather jarring experience overall, though one that the studio has promised to improve in future updates.

Picture quality also has noticeable. While I’m not one to notice these drops in more action base games, because the Medium uses a fixed camera it is avertedly noticeable due to scenes remaining still. Artifacting is also very common, which at first had me very concerned thinking my GPU was dying in my newly purchase Xbox. Thankfully that wasn’t the case as I consulted with a few other reviewers on the issue to see that they too were experiencing it. Still, not very eye appealing.

It All Ends in Me

Honestly, The Medium is one of those games that I wish I could re-experience again for the first time as it has vibes similar to Alan Wake, and even more so to Netflix’s Stranger Things TV show. If you’re a fan of those two things, then no doubt The Medium will be right up your alley as the writing is captivating, as much as the world itself. Performance issues aside, The Medium is definitely a title worth playing, one that hopefully see’s a future filled with sequels.

Review code provided by the publisher. Played on Xbox Series X. You can read SP1st and MP1st’s review and scoring policy right here.