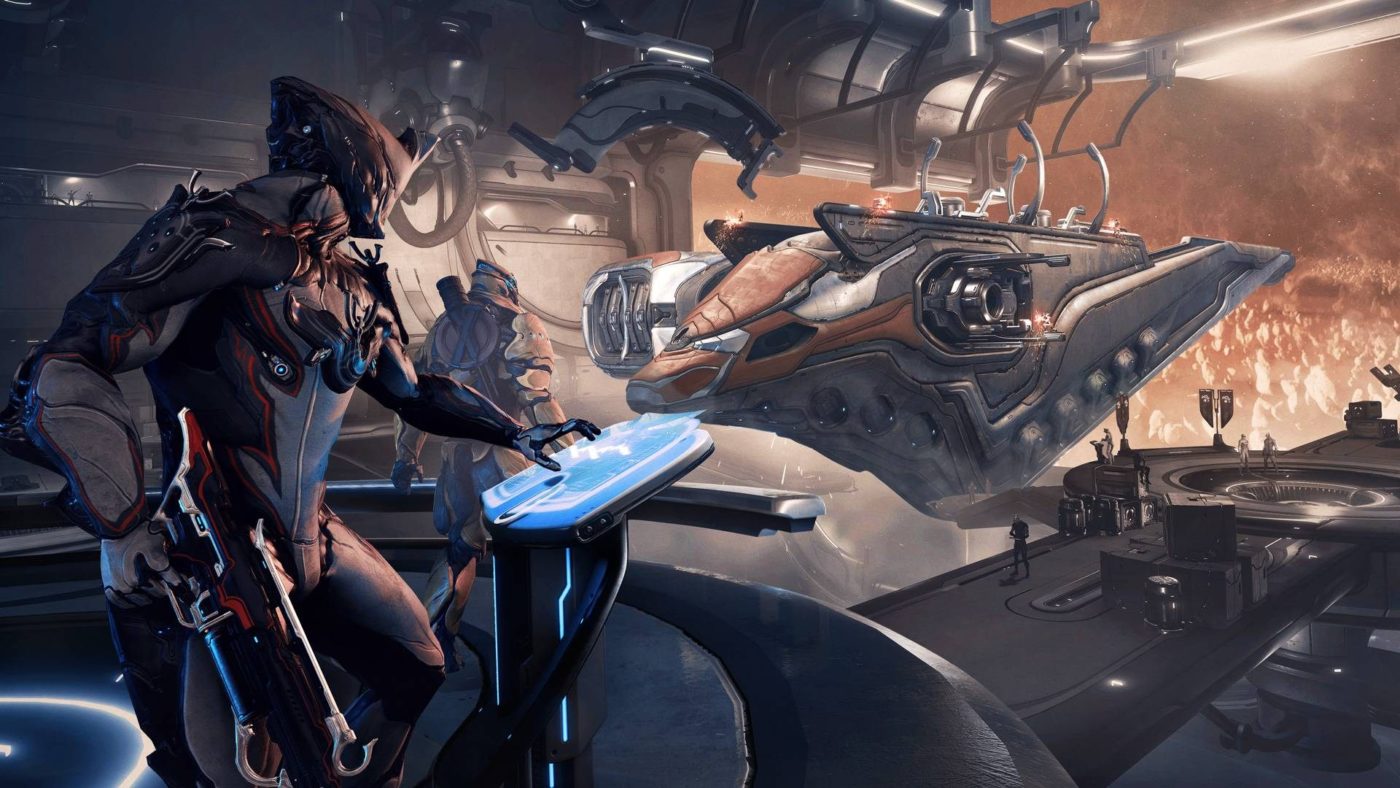 As part of the festivities at The Game Awards, Digital Extremes has released Warframe update 1.80, or otherwise known as the Warframe Rising Tide Update 26.14 (version number). Clocking in at 1.5GB on PS4, check out the full Warframe update 1.80 patch notes below

Update: For those looking for the Warframe update 1.81 Empyrean update for consoles, check out the details of that here.

The Dry Dock has arrived – it’s time to prepare with a new QUEST: RISING TIDE. By the end of this quest you’ll have assembled a Railjack, but it is not ready for flight. The time will come, Tenno.

The balance of power is tipping.  An imminent threat grows stronger, surging across the Origin System. Will you stand against it? Keep pace in the arms race by starting construction on your Clan’s Dry Dock!

Build the Dry Dock, assemble your Railjack and prepare for the coming battle. What will begin as a hangar will evolve into your sanctuary, a space to hone and upgrade your ship with powerful technology to become the weapon you’ll need. Build the Dry Dock by rallying your clan and contributing Resources to its construction. After that, if you have completed the Second Dream Quest, start the Rising Tide Quest to begin forging your Railjack.

The Grineer threat is mounting and you must rise to meet it. Track down the pieces of a long destroyed Railjack and breathe new life into it with the help of the newest Cephalon, Cy!

Time has not been kind to the Railjacks. You’ll need to work with Cephalon Cy to find viable salvage from wreckage across the Origin System. After Cephalon Cy is installed in the Dry Dock, locate the six necessary Railjack components, retrieve them, then return back to the Dry Dock to restore them to glory. Once your Railjack is rebuilt, you’ll be able to board and explore your ship. Ignition and flight command requires additional components, which have yet to be located by Cephalon Cy.

This update previews new Resources for future update EMPYREAN! When Empyrean launches, a wide variety of Railjack Specific resources will launch in missions, but we are previewing 4 new Resources early to aid in the construction of your Railjack:

Eximus Units will Drop 2 of the new Resources:

Note: On-kill extra drops (like Khora and Hydroid) do not apply to these Resource drop type – Cubic Diodes and Carbides have a 100% chance to roll the table for a 50% chance, can’t boost that 100% any further!

Mining will reward 2 of the new Resources:

EQUINOX ANTONYM SKIN
Few things are more destructive than a secret. Unleash your opposite with this skin for Equinox.

STRATUS PISTOL SKIN
A billowing new skin to provide a unique, ethereal look to your pistol.

ASTREOS SWORD AND SHIELD SKIN
Husband and wife, dawn and dusk. A signature Sword and Shield skin for Equinox.

CIRCADIAN SYANDANA
Rise and fall, ebb and flow, peace and war. A signature Syandana for Equinox.

CUMULUS COLLECTION
A cosmetic collection as ethereal as a misted mountain and as striking as a thunderclap. Contains the Stratus Pistol Skin, Cumulus Syandana and Cirrus Armor Set.

CUMULUS SYANDANA
Roiling and swirling with the promise and threat of a thunderhead, the Cumulus Syandana is for those Tenno who dwell among the clouds.

CIRRUS ARMOR BUNDLE
The preferred armor set of those who call both the mists of morning and the fog of war home. A perfect complement to the the Cumulus Syandana.

THE ORIGIN PACK
The Origin Pack is the best possible value for a Tenno looking to boost their Arsenal and get some spectacular new Cosmetics! The Origin Pack features the new Parotia Syandana and 200 Platinum.
General Additions:

Critical Chance On Rivens
We recently increased the stats of the ‘Steel’ Category of Melee Mods (True Steel, Sacrificial Steel). We are now doing this for Rivens among other Mods to bring them up!

We have 2 design changes to Liches to aid in the co-op nature of our missions, as well as the general mission flow:

1. Rank 1, 2, 3, and 4 Liches now drop Kuva for all squad members when a Parazon is used on them – whether that leads to defeat or ranking up, the Kuva is yours on Ranks 1 through 4! Kuva numbers are balanced against Siphons / Kuva Survival missions, and take into account the fact that multiple Liches spawn in missions. The aim is to not make this the best Kuva run, just an added value. Siphons and other missions are meant to be the optimal path. Rank 5 Liches do not have Kuva as a drop as they could intentionally be kept alive for a vector to acquire Kuva. The Drops are: Rank 1: 150, Rank 2:  200, Rank 3: 250, Rank 4: 300. This is lower than some other discussed numbers because we are now letting it share across Squadmates.

2. Liches now run away (but don’t rank up) if you’ve downed them 3 times, but don’t use your Parazon on them. This allows you to overpower your Lich and have it flee, instead of having the only way to remove it from a Mission be your failure to know a Requiem.

The changes that refined Afterburner and brought Blink to all Archwings were not included in this Update because we could not get them to work properly in time, and we did not want to hold the rest of the content. We were optimistic we could include it, but it was apparent in our testing that we’d cause quite a few binding blunders releasing it in its current state. So we are putting time into releasing a more controller friendly version of the changes for our console Tenno. That said, one Archwing change we did include in this update from the batch in PC’s Update 26.1 is Itzal’s new ability “ARCH LINE”. This means that Blink will be temporarily unavailable until we release it on all Archwings with sensible bindings. It goes without saying that we know this is extremely disruptive for our Tridolon hunters who heavily rely on the ability – we will be resolving this in the next Update! We know this is not ideal, we apologize for the temporary hold on Blink while we work to improve overall Archwing controls on controllers.

ARCH LINE has replaced Itzal’s Blink ability:
Launch a tethered hook that either pulls enemies close, or pulls the Warframe towards any stationary objects it hooks onto.

Consoles will be getting the big Empyrean update after this patch, with the PC version getting it today.