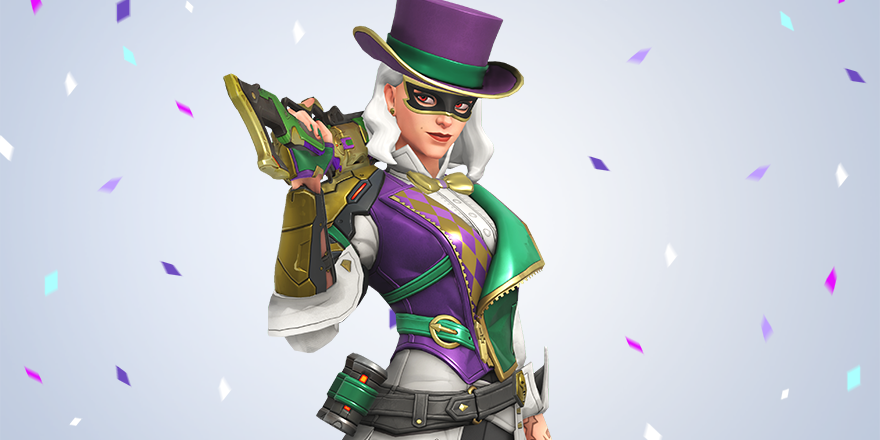 Tune in to participating Twitch broadcasters while they’re playing Overwatch any time through March 9th to earn a total of 6 Ashe’s Mardi Gras Challenge sprays and icons!

We will be introducing Hero Pools starting in Season 21 of Competitive Play. Much like Map Pools, rather than having all heroes available for play at all times, a weekly changing list of heroes will be available. The list will include the vast majority of the hero roster, with only a few being excluded during any given week. We think this feature will help keep Competitive Play interesting, as team compositions will change more frequently during a season.

It is important to note that Hero Pools is a new feature that may not last past this initial season. Throughout the season, we will be adjusting the types of Hero Pools available. In addition, it is possible we will also adjust the frequency with which they change.

We’ve added a new card labeled “Experimental” within the Play menu where Overwatch players can try new balance updates, rulesets, and game modes that might be awesome or might not ever make it past the “Experimental” stage. Unlike the PTR, the Experimental area is not intended to be used for bug and stability testing. Players from all platforms will be able to test major gameplay changes, with the hope that you’ll provide us with feedback on your experience. Some of the changes we test will be vastly different than what you’re used to, but we want to reiterate that the changes we will be testing are not guaranteed to reach the retail version you’re used to playing. Experimental will not always be available: it will come and go as we have things we’d like you to try and may sometimes only last for brief periods of time.

Since Experimental is available in the retail version of Overwatch, you will be able to earn experience and progress towards win-based event unlocks by participating.

The first set of changes we want to test is a mode titled “Triple Damage,” which modifies the existing 2-2-2 Role Queue system. In this mode, teams will be composed of 1 tank, 3 damage, and 2 support heroes. One of our hopes with this test is to see if this change reduces queue times for the Damage role.

Note that the balance changes below only affect the “Triple Damage” Experimental mode.

In other Overwatch news, a new report has surfaced stating that Blizzard is developing an Overwatch animated series! Read up on that here.