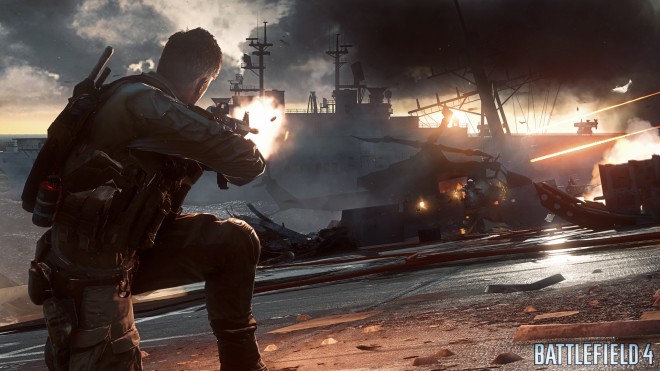 Battlefield 4’s release date is getting closer and closer and this time, EA and DICE are keeping us filled in on all the additions they are making to the game.

Plus the studio is even giving us, the Battlefield community, a chance to shape the final product! They’ve recently released a poll for us to pick our favorite Field Upgrade Path that will be added into the game on top of all the default path choices. In honor of this, we’ve decided to gather up our writers and a mix of YouTube personalities of varying gameplay styles; Mantis701 – the pubstar knifist, Daskro – the e-sports player, BanditoGaming – the weapons specialist, and me, the MassNERDerer, to chime in on which community choice we are voting for and why. Read below to hear the MP1st writers opinions, then click over to the video at the bottom of the post to see the YouTuber’s opinions.

To start, here are the new Battlefield 4 Field Upgrade paths up for vote. Make sure to read up on each!

This is the career for players who want to wreak havoc at the frontlines. Built to promote offensive play and gung-ho attitude, you’ll need all the extra AMMO you can get. ARMOR gives you that increased protection that means you could walk away from chance encounters at zero range when rounding a corner, while an added GRENADE lets you clear out enemy camps more freely. Lastly, that extra SUPPRESSION boost comes in handy when you find out you’ve run into a hornet’s nest.

Fortune favors the brave. Or in the case of the “SURVIVOR” career, fortune favors players who have bolstered their survival capabilities by picking the right specializations. REDUCED FALL means you can jump off rooftops when enemies are blasting RPG into your building, while extra AMMO always helps when trying to shoot yourself out of a pinch. QUICK REGEN means you only need a short period of time before your soldier starts to auto heal, while COVER effectively means enemy suppression will not have as much effect on your ability to return fire with accuracy.

Inspired by the fabled shadow warriors of the Orient, the “SHADOW” career grants you the mystical powers you need to infiltrate enemy territory without being seen. Okay, not really, but it grants you some perks that accumulated will give you an edge when going behind enemy lines. QUICK UNSPOT means you’ll disappear more quickly from enemy radars when you’ve been spotted, while SPRINT lets you move quickly from cover to cover. REDUCED FALL lets you jump from your favorite hiding places without taking damage, while STEALTH grants you the ability to remain undetected when passing within range of enemy motion sensors.

So you want to be a big game hunter? ADVANCED SPOT grants you the ability to have targets spotted for extended periods of time – they can run, but they can’t hide. While they’re cowering behind cover thinking that they’ve escaped detection, SPRINT up to them and use your extra AMMO and GRENADE to flush them out! Sometimes, playing Battlefield is almost too easy.

You can cast your vote right here, which must be cast no later than August 22 in order to have an influence on what makes it into the final game.

No matter what the situation calls for, to me, the ‘Shockwave’ field progression offers everything a well rounded player like myself needs. Things like more ammo to rack up more kills or keep the enemy team pinned down with the added suppression are a big plus, especially when you have the ammo to spare, putting the opposing team is in a bad situation. It’ll also be easier to to stay alive a bit longer thanks to the upgraded armor and, of course, flush out any pesky campers from their holes and clear out a high traffic area with the extra grenade you will receive. All in all, ‘Shockwave’ will not only let you stay in the fight for longer, but also keep the enemy on their toes when a prolonged fire fight with you is not in their best interest.

This game is all about killing or getting killed, and what better way to do it than with the “Shadow” field progression? Sometimes, we have to accept it; we can get spotted by enemy players who target us for their teammates, and with a quick unspotting configuration, they will rarely know where you are. If they do, you have the ability to sprint towards terrain where you have an advantage. Since you have reduced fall, you can find paths nobody but you can use to flank the enemy, and combined with the stealth, they won’t know what hit them. In general, “Shadow” will not only give you the ability to survive difficult situations, it will also give you the opportunity to kill them from behind or even be a crucial spawn point for your squad to flank, bringing your team to victory.

Being the aggressive recon that I tend to be, I’m seriously eyeing up that ‘Hunter’ upgrade progression. I tend to Spot like a mad man when scoped in – be it a lack of confidence in my own shot, or a sense of duty to provide my team with the latest intel – so lighting up my enemies for a longer period of time is super beneficial. Sprint and Ammo simply allows me to be as aggressive as possible, or at least as aggressive as a Recon player can be. Being a big fan of the Radio Beacon, and T-UGS (yay for the return of Motion Balls in BF4), especially in game modes like Rush, I like to run up as far ahead as possible to a sneaky spot to lay down a tactical spawn point for my team and get a leg up on the objective. Also, considering the Recon’s lack of Close-Quarter weaponry, the extra grenade just gives you that slight edge when it comes to explosive fire power.

Be sure to give a special thanks to this episode’s guests, Mantis701, Daskro, & BanditoGaming, and subscribe to MP1stTV to never miss one of our videos. Enjoyed the gameplay? Check out more from Neuro on his channel.

Which field progression path did you chose and why?

Keep your sights on MP1st!

MP1st Panel is a new series of posts I’ll be doing via the MP1st site and YouTube channel. It’s an opportunity to hear what we think about current topics, plus we get to hear all of your opinions as well.