The next bone-breaking and the most brutal Mortal Kombat to date isn’t expected to arrive until sometime next year, but developer NetherRealm Studios and franchise co-creator Ed Boon has given out tons of information over these past few days.

So, ‘GET OVER HERE’ and read on up on all the latest details surrounding Mortal Xombat X. Here’s everything we know so far:

According to Boon, the story of Mortal Kombat X takes place after the shocking events of Mortal Kombat 9 and will span up to twenty five years into the future. However, due to the time frame of the game, it’s very possible that some of your favorite characters may not make it into Mortal Kombat X. If they somehow manage to do so, they will look older, as stated by Boon.

Mortal Kombat X is will also feature a main antagonist much like its predecessors. Unfortunately, Boon didn’t exactly reveal who it was, aside from hinting that the bad guy will be a fun surprise and will indeed be a returning character.

One the topic of characters, currently, six of the twenty-four kombatants for Mortal Kombat X have been revealed, each with three different variations that specialize in different move sets:

In addition, each variant will also include some interesting visual identifiers – a small “attachment” to a character that gives them a different look. For example, when Scorpion is using the Inferno variant, he will have a skull on his hip. Picking his Ninjutsu variant will give him two swords on his back that he can incorporate into his move set. And, yes, each variant will drastically change the way that fighter plays as he/she has access to different moves and combos.

Aside from the six characters to be revealed, it is also possible that the souls of a thousand warriors, Ermac, will make the roster. Not only has the senior character artist over at NetherRealm Studios revealed concept art for the character, but the re-imaging of him also fits perfectly with the darker and more grittier tone that Mortal Kombat X is leaning towards in some of the new character designs.

Speaking of the roster, we also got to see the first glimpse of the character roster and the silhouettes of some of the fighters that might make the cut: 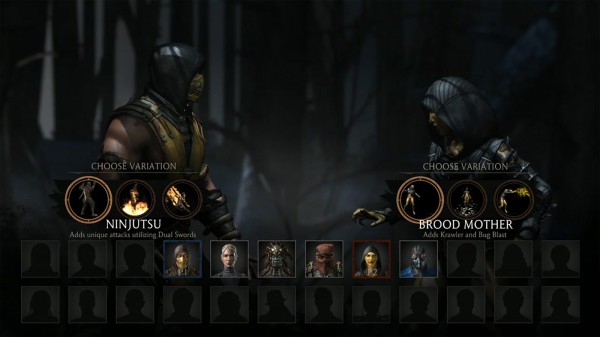 If the above silhouettes don’t look like any characters from your favorite Mortal Kombat game, don’t panic. Boon stated the silhouettes featured in the E3 build weren’t final, though they do contain some hints as to who will be in the game.

Not much is known about what NetherRealm Studios has planned for the online component of Mortal Kombat X, but the following excerpt for the game gives us a small hint:

“With  a fully-connected gameplay experience as players are launched into a persistent online contest where every fight matters in a global battle for supremacy.”

It looks very interesting, but it’s way to early to tell what NetherRealm Studios has in store for us when it comes to online play.

Fatalities are pretty much the biggest determining factor that sets this fighting series apart from every other series in existence and with Mortal Kombat X, NetherRealm Studios is adding the most brutal fatalities yet.

Watch them out below:

If Boon and NetherRealm Studios follow the same marketing for Mortal Kombat X, then it’s very possible that we may get another look at the game during EVO 2014. As Boon stated, he will be attending this year’s tournament to watch some of the biggest names in the Mortal Kombat tournament scene who may or may not participate in a mini tournament to showcase Mortal Kombat X being played at a high level.

Mortal Kombat X is set to release sometime in the year 2015 for the PC, PlayStation 3, PlayStation 4, Xbox 360, and Xbox One.