by Tom Gregorio
in Features, Reviews

The third and final DLC for Season Pass holders, the Castle Map Pack, has arrived almost five months after Halo 4’s initial release. A lot has been made of not only the direction the game is heading in, but also the quality of the DLC thus far. After the lackluster Crimson Map Pack, 343 Industries followed it up with a much better showing in the Majestic Map Pack (which this reviewer quite enjoyed, though hardly found impressive). So does Castle finish off the DLC on a high note, helping to justify the purchase of a Season Pass? Or does it falter merely serving as a cheap cash-in on the Halo name? Read on to find out. 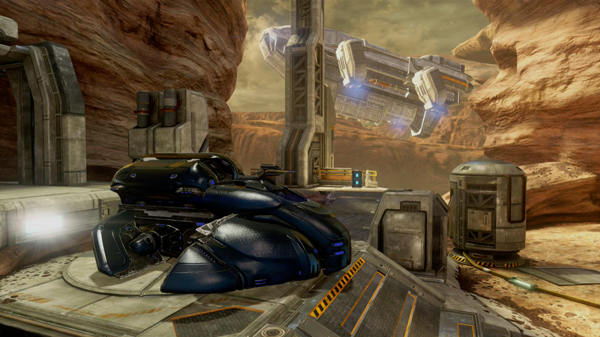 The big claim for Outcast is the vehicular combat between Wraith vs. Mantis. Up to this point, the only way to see these two pieces of heavy armory square off was Campaign, Spartan Ops, or edited in by Forge. While the battles between the two can be quite enjoyable, the duration of these encounters are often brief with the victor usually being the one who got their reticule on the enemy first. Once you get past the billing of these two behemoths duking it out for the first time in the competitive environment, this map falls flat on its face.

Visually speaking, this is one of the most generic maps out there coming off more as a Forge environment waiting for the objects to be added rather than a full fledged map. A few shades of sand colored rocks make up the vast majority of the color palette. Pulsing lights line the inside portions of the main cave and in the side tunnels, but other than the steel walkways embedded in the Red Team and Blue Team bases, 95% of what you will be looking at is rocks, dirt, and sand.

Currently, the Castle DLC playlist has games setup for 6v6 with various gametypes included to help showcase how to achieve the most fun on the new maps. However, the default variants for Oddball and CTF on Outcast are quite dull and really miss the mark on fun factor. My chief issue with Outcast is the steel walkways directly above both flags are extremely advantageous. Unlike other portions of the map, the sight lines are not exceedingly long when occupying a walkway. For a defending player, there isn’t much in terms of long range fire you need to worry about. If an enemy somehow manages to get within close proximity of the flag, the height advantage makes it quite easy to drop a grenade below at the opponent’s feet significantly reducing their health and making their escape with the flag last merely a few steps. If radar was turned off, stealthily approaching your enemy would be more of a plausible strategy. The railing in front of the steel walkway also absorbs an abnormally high amount of fire coming from enemy Ghosts and Warthogs. Many times when I was on the walkway fighting an enemy vehicle, I seldom felt the need to find cover until the firefight lasted more than 5 seconds (going up against a Wraith or Mantis, however, is a much different story). As long as a couple teammates stay back with you, the combination of height advantage, cover, and focused fire can give your opponents absolute fits. The same issues apply when trying to capture the enemy flag. Even achieving an overkill at the enemy base will buy you barely enough time to get halfway back to your base with the flag before the enemy conveniently spawns close to your proximity. Bringing the flag halfway back to base never made me feel I gained some sort of advantage. Oddball shares some of the same issues with CTF. A strategy I’ve noticed developing is getting the Oddball and bringing it back to the easily defendable bases. While the logic behind the strategy is quite sound, it absolutely wrecks the flow of the match with teams often times holding the ball in excess of 45 seconds at a time.

After seeing and playing Outcast, its really hard not to shake the feeling that this is a throw away map from the Crimson Map Pack.  Firefights are sparse, the map design and layout are uninspired, bases are too easy to defend, and the Mantis v. Wraith matchup is overhyped. While I won’t say its the worst map over the course of all the DLC, it would definitely finish last amongst the maps from Majestic and Castle. 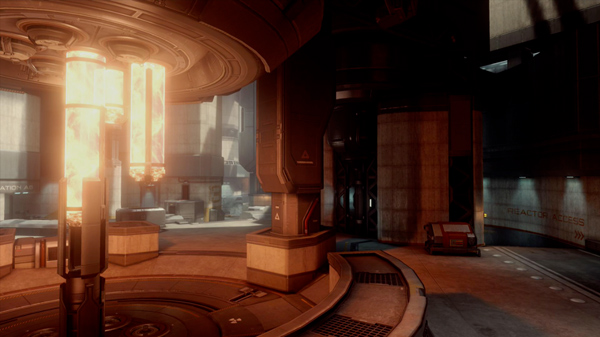 Easily the most accessible map of the three included, Perdition is a nice mix of wide roads for Warthogs and Ghosts to easily wreak havoc and short pathways that keep the infantry combat going at a consistent clip. While the map comes off as rather large, finding the focal point of gunfire on foot is actually quite easy and takes almost no time at all. A good sense of direction, two fully charged sprints, and a few extra steps of walking is all it takes to get into the thick of things. No easy task for a map of this size.

The default weapon spawns include 2 of the seldom used Concussion Rifles, a Needler, a Rocket Launcher, and a time delayed Sniper Rifle. If you are trying to flip a vehicle that is giving you fits, then the Concussion Rifle can come in handy, but sticking to the default weapons or going for other power weapons is a better strategy. At each team spawn you’ll find a single Ghost and Warthog in close proximity. The most important thing to note is the neutral spawn of the Rocket Warthog towards the center of the map. Since it spawns right at the focal point of no less than 3 pathways, it can also serve as a nice stationary turret should the enemy team be absent minded enough to not notice its occupied on the radar (which happens quite often). The best use, however, is having a driver/gunner tandem taking out all oncoming vehicles and infantry across the entire map. As long as the driver makes use of the handbrake to avoid the occasional divider or obstacle in the wide roads, the Rocket Warthog can really change the tide of the map.

While I admit Perdition doesn’t look like anything special, this map really has the ‘it’ factor. Despite being a fairly large asymmetrical map, it plays small enough so that infantry combat is just as viable an option as vehicle combat. The sense of always having an impact whether you’re on foot or in a vehicle easily makes Perdition the staff favorite of the Castle Map Pack. 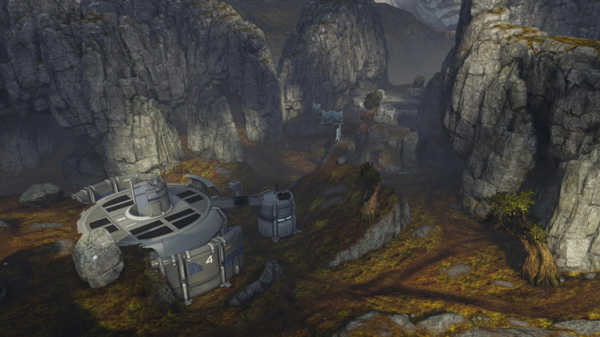 At first glance, Daybreak comes off as a relatively straight forward symmetrical map, with two similar looking bases directly opposite each other, but closer inspection will reveal a highly nuanced asymmetrical map. The differences begin to crop up immediately once you are on top of either base. Red Team’s base has very sparse coverage on the roof with a man cannon that quickly transports players to the top of the center ridge. While the man cannon isn’t present on top of Blue Team’s base, there is a connecting walkway from the base that allows players to reach the center ridge without the need to jump. Blue Team base also has the advantage of more barricades on top allowing for more protection from long range fire. An interesting difference is the air lift inside Blue Team base. As a Red Team player, I only utilized it if my teammates could clear any opposing players off the roof so I could bring the flag down the center and towards the ridge. This was often the case in games where communication was utilized. When communicaion wasn’t used, it was almost guaranteed death venturing up the lift and the flag being reset.

The default weapon spawns entail a sniper rifle spawning on top of both bases (eerily reminiscent of Blood Gulch), a rocket launcher spawning near the ghost, and a time-delayed Spartan Laser on the center ridge. Both bases will get a Mongoose and Warthog that spawn towards the back, with both teams having a fair shot at grabbing the neutral spawn Ghost and Banshee (though it never hurts to carry a plasma pistol in case the other team beats you by a couple steps).

The layout of the map could be simplified by stating there is an elevated pathway that extends down the center of the map connecting both bases with a ‘ring’ surrounding it. While the outer ring is predominantly the focus of vehicular combat, there are definitely moments where a good long range 4v4 infantry battle can be waged. Having a sole Banshee on the map can feel unbalanced at first, but as long as your team understands the concepts of focused DMR fire and the need for plasma pistols, the enemies reign in the sky shouldn’t last too long.

CTF is definitely the go to mode on this map. Bringing a flag back to base successfully requires a bit more strategy than other maps. Often times, I found myself having to wait inside the base for periods of time, meleeing oncoming foes, and having my teammates clear the outside before I begin making my way back to base. Since the sightlines are so long on the outer ring, a getaway in a Warthog or Mongoose isn’t a sure fire move for securing the flag. Speaking of the Warthog, I am rather interested to see how the impending damage boost to the gunner position will affect how this map plays. Currently, it just feels like it takes too many shots to net a kill on an enemy. The shields deplete fast enough, but once they pop, the enemy generally has enough time to find cover around the corner of one of the many rocks despite having reduced movement speed. Not to mention, one sticky grenade and a couple seconds of focused DMR fire is all it takes to destroy a Warthog.

Even on the default 6v6, regardless of the gametype, there are definitely matches where you feel you can’t find the action. Trekking on foot on the outer ring can sometimes lead to minute intervals before you find gunfire. In some instances, you’ll find players who camp in crevices and along the rock face in attempts to achieve an assassination. There are quite a bevy of these hiding spots so its hard to focus your reticule on just the ‘usual’ spots since enemies (or teammates) can be anywhere. As a result, this can really slow down matches, in particular the Slayer variants. Daybreak can definitely run the entire gamut ranging from woefully boring one match to wildly fun the next.

While the amount of camping spots on the outer ring might not always result in an action packed match, Daybreak more often than not inspires awes rather than yawns.

Although there is potential for future DLC, the Castle Map Pack signifies the end for content included in the Halo 4 War Games Map Pass. While Castle isn’t the map pack fans had hoped for, the fun provided by Daybreak and Perdition make it a worthwhile purchase for now. That being said, getting into a matchmaking game with a Majestic Map Pack map is nigh impossible at this point in time despite its initial popularity. If the Castle Map Pack were to follow this trend, a month from now your only way of playing these maps would be in a custom game lobby. You might want to save your money unless you get in on the initial craze, or the popularity of the Castle Map Pack is still fervent months after release.