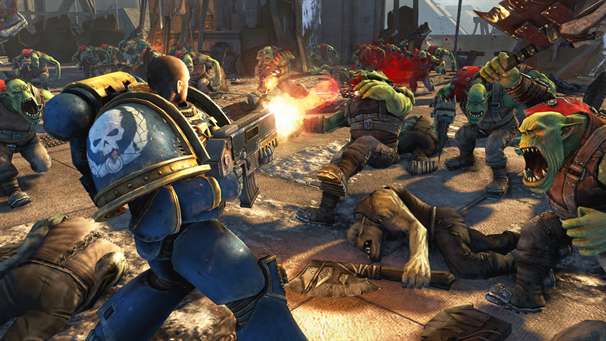 Space Marine is quite the departure for Relic, whose Dawn of War series solidified them as the premier handlers of the Warhammer 40k license. While Dawn of War focused on tight, balanced real-time strategy gameplay, Space Marine is a gutsy, gory, badass third person shooter. The campaign is a twisted tale of betrayal, in which Captain Titus sets out to rid a world of the dreaded Orks. While the campaign in an excellent romp through the Warhammer 40k universe, the competitive multiplayer is an exceptional addition that should not be overlooked.

There are 2 game modes: Annihilation (think team deathmatch), and Seize Ground, which is identical to Domination from the Call of Duty series. Annihilation matches are quick, brutal games that end when one team reaches 40 kills. Seize Ground is just as brutal, but has a much different cadence. There is a deliberate ebb and flow as each team vies for control of the capture points (3 or 4 depending on the size of the map). The game ends when one team reaches 1000 points (each captured flag nets 2 points per second).

While there are only 5 maps, they are designed very well, and don’t get stale; the superb level design is a true testament to Relic’s multiplayer team. Many objectives will have a staircase leading to them, or require terrain traversal in order to reach, but the Assault class can jetpack from a closer location to get there. This multilayered design approach to the maps negates forced chokepoints, creating a different flow of battle on each play. The one exception is the very small map Shattered Bridge, which is basically a grinder. Even that map is a blast, though; it’s fun trying to gain some ground to the next cover area in an effort to capture the middle base. The death toll will become astronomic, but capturing the middle point is an almost guaranteed win. 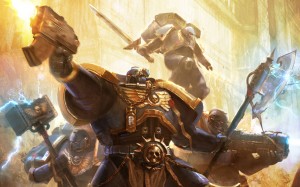 The action is always close. You have a default “safe” spawn zone as well as the ability to spawn on any captured flag (if you’re playing Seize Ground). Also, there is a perk that allows players to spawn on you. From rank 1-4, you are equipped with this perk and cannot change it. It’s nice, because when a player spawns on you, you get 50 XP, so newbies can rank up quickly whether they are killing/capturing, or not.

The unlock system. Holy crap, the unlock system. When the Customizer trailer premiered in which Relic claimed to have over 1 billion customization options, many gamers called “Foul!,” and assumed it was the kind of hyperbole that Gearbox used in promoting Borderlands.

…not so. Every rank up will net you a new weapon or class. But the real meat of the progression system comes with the challenges. A challenge system seems like a prerequisite in shooters these days, but Space Marine’s is far above average. Weapons have 4-8 challenges, most involving assists and number of kills. In addition, there are 16 sets of armor challenges, each with 5-8 challenges, that require you to do anything from die 50 times due to explosives, to amass 25 killstreaks as a Chaos warrior, to win 15 games as a Space Marine. The level cap is 41, and it should take an average gamer around 25-30 hours to reach that cap. The upcoming (free!) cooperative DLC will actually operate like the multiplayer does; you will be able to continue ranking up and completing challenges while you massacre the Ork hordes with your friends.

Each passed challenge nets you an XP bonus, a piece of armor, and (possibly) a perk. The perks are excellent. It’s hard to decide between them, though: should you go for the increased damage rounds for my bolter, a refined targeting system, or the ability to have my jetpack explode when you die, killing nearby enemies?

The armor system is so in-depth and amazingly customizable that it becomes a diversion in and of itself, much like the extensive customization options found in RPGs such as Too Human or Fable (the game features a vast array of color schemes). 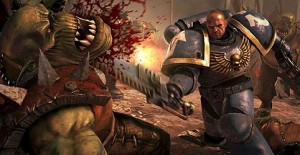 While it is an amazing experience, Space Marine’s multiplayer is not wholly perfect. It takes a couple of minutes to find a game (however, once you’re in, you stay in the lobby from match to match, so it’s not too bad). Also, when the game ends, it occasionally displays a “migrating host” screen for about 8-10 seconds before it shows you “Defeat” or “Victory.” It seems like a weird bug that could be patched out. The only seemingly negative aspect of the actual gameplay, however, is the high amount of “one-ht kill” scenarios. There are 4-5 weapons that can kill a player in one shot, and it can get frustrating for players who have yet to learn the ins and outs of the maps.

I highly recommend fans of brutal combat and focused, competitive games try out Space Marine’s suite of multiplayer options. While it may not be as varied or diverse as the heavy hitters about to drop (Gears of War 3, Battlefield 3, Modern Warfare 3, etc.), it definitely deserves some of your time.

Relic has detailed an upcoming patch addressing connectivity issues and weapon balance. Stay tuned for an update to this review detailing the patch as well as October’s “Exterminatus” co-op update. Any significant gameplay changes or additions will be reflected in this review.