After a rough ride, including an unsuccessfully funded Indiegogo campaign back in 2012, the independent Canadian trio Gigatross Games is back with the follow up to their charming 2011 Xbox Live title, Grand Class Melee.

Grand Class Melee 2, like its predecessor, is a class-based RPG arena fighter where players select from over 60 character classes to do battle through eight rounds of 4-player combat in the vein of classic console multiplayer. Combatants earn new abilities every round as they progress through their class’ skill tree. 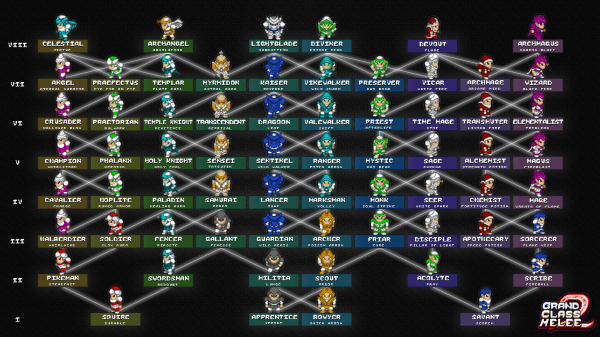 At the core of its gameplay is a slash, thrust, and parry melee system coupled with abilities selected from one main class and one lower class. Other features include bots, teams, custom scoring, procedural biome battlefields and other game style tweaks that keeps each fight fresh.

Since 2012, the studio has self-funded and built Grand Class Melee 2 from the ground up twice. After a successful Greenlight campaign at the end of 2014, Gigatross is now ready to get things rolling with a Steam Early Access period beginning this February 2. Modes included are Online Multiplayer, Survival, and Practice Mode.

An Xbox 360 release via Xbox Live Indie Games is “in the cards,” but the studio’s focus now is on Grand Class Melee 2’s Steam launch. You’ll find the game’s Steam page here and a few more details on the game’s classes right here.

In the meantime, Gigatross has been kind enough to hand us a batch of Grand Class Melee 2 Early Access Steam keys, so make sure you’re following @MPFirst on Twitter where we’ll be handing out keys  EDIT: closer to launch!