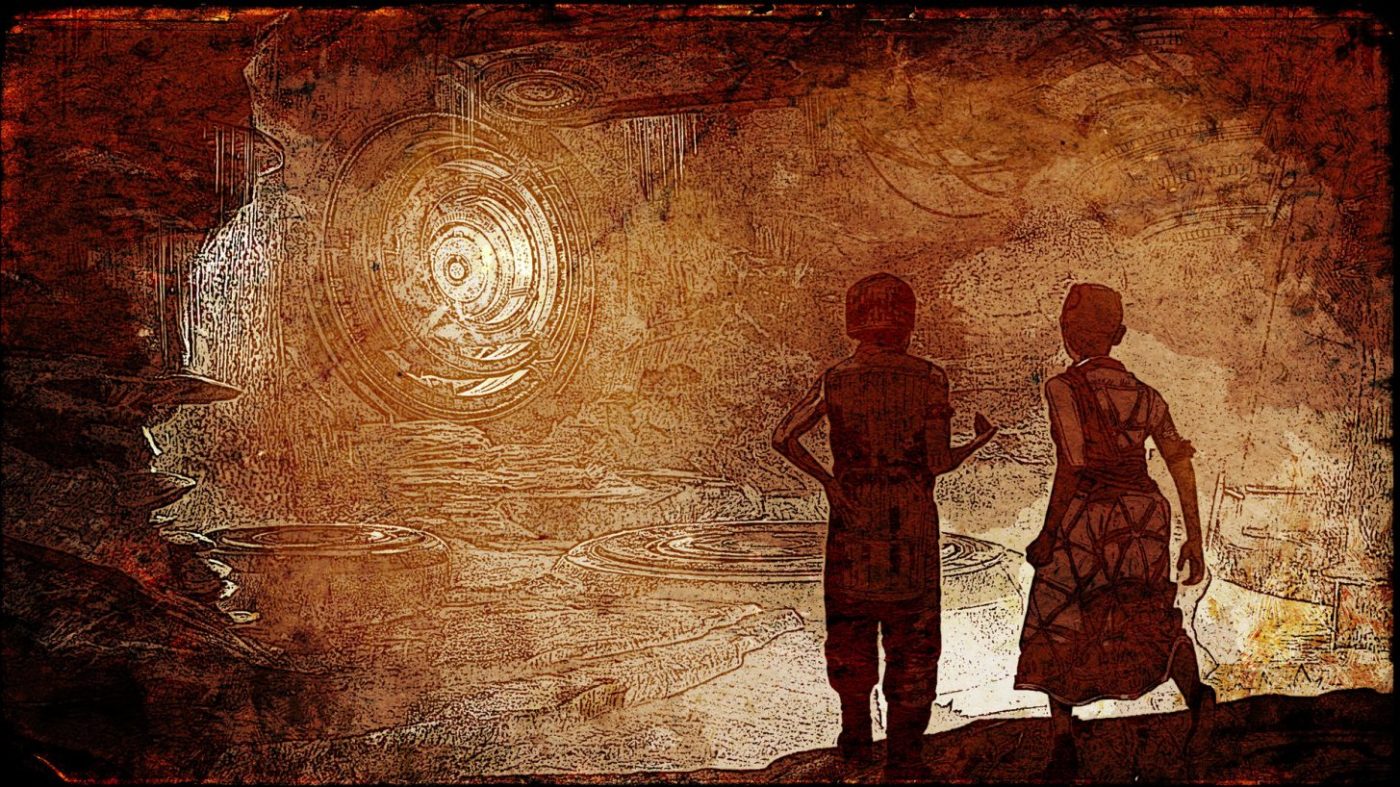 For those playing Anthem, today marks the end of the Anthem Season of Skulls event. While BioWare hasn’t shared what’s coming next, or if there’s any event set for December, the studio did share a horror story.

Called “The Unwinding Box,” check it out in full below.

Once upon a time, there were two mean-faced girls. Everyone who encountered these girls remarked upon their fiendish demeanors, and all who spoke to them knew that they were no good.

Indeed, they were more than just mean-faced: they were spiteful, ill-behaved, insolent, loathsome children, profoundly averse to any useful labors and famous for playing the nastiest sorts of tricks on the town’s rule-abiding citizens. It was thought that these unpleasant girls had become so because they were abandoned as infants in the alleys of the town, with no parents to teach them right from wrong.

Yet despite the unfortunate circumstances of their upbringing, only the most charitable of souls took pity on children with manners as ill as these.

Such were the times.

One day, the two mean-faced girls worked a medley of malign pranks, which, in whispers to one another, they called “joys.”

They sprinkled vesnid powder on the fishmonger’s wares, and all who ate it went blind for a day. They tortured a baby wyvern and released it into the satomi, where it bit and scorched the cypher headmaster in his study. They stole handfuls of steel bearings from the javelin forge and scattered them around the market stalls, causing injury among the merchants and patrons. They even abducted the Sentinel Captain’s loyal hound and “walked” it in the nearby moorlands, where it was trampled near unto death by wild korox.

The two mean-faced girls took delight in these joys.

“We are the cleverest girls in the town! Do you agree?” said one.

The other replied, “Indeed, not only the cleverest—but the prettiest, too!”

And at that, they laughed a laugh so horrid, beastlike, and shocking that a nearby potter spilled her glaze and had to fetch more from the general goods dealer.

On this particular day, unlike many others, the Sentinel Captain caught the mean-faced girls in the act and held them for punishment. With her bandaged and baleful hound standing watch, and the perpetrators locked in the stocks nearby, the Sentinel listened to the girls’ victims and considered their pleas.

“Throw them in the deepest gaol!” roared the fishmonger, still rubbing his eyes.

“Brand them with the mark of Irascible Miscreant!” shrieked the market chief, hobbling on a crutch.

“Thirty lashes for these dirty lasses!” howled the cypher headmaster, indicating the bite marks on his forehead.

“Would you like the privilege yourself, headmaster?” shouted one of the girls, who wriggled out of her trousers and showed her pale bottom to all assembled.

The crowd surged forward, their loathing hot as lamp oil. “For pity’s sake, Captain,” they yelled. “Look at your own dog!”

But the Captain merely folded her arms. For all their warts, the Captain had a soft spot in her heart for these pranksters. And so, she sentenced the mean-faced girls to two weeks’ labor in the town’s Freelancer vault—no less than the law demanded.

“I know what you truly are,” she said to the girls on leaving them to the vaultmaster’s care.

“Somewhere there, inside your mean little selves, I sense a glimmer. The spark of invention. And we have need of that.” She got down on her knee to look them in their bad little faces. “So promise me: look to your glimmer, so that others may see what you truly are.”

“We promise,” they lied.

The vaultmaster left them that night to sweep the deep vaults, and thus their baser instincts resumed post-haste. They poked their noses into unsorted salvage. They played dress-up in obsolete javelin armor. They juggled spent mortar casings and danced on defused mines. They mixed up the confiscated scrolls and penciled filthy rebuses in the untranslated tomes. They hurled handfuls of exhausted ember dust into the air and marveled as the electric lights cast fractal polygons in the silvery clouds.

And then they discovered the box.

It was a plain-looking box, certainly overlooked by the junior cyphers who appraised Freelancer salvage. It had twelve sides of flat grey metal, cool and smooth to the touch, with a small hole on one end. When handled, it did nothing.

Now, all good little boys and girls know that objects like these must never be touched by anyone but an Arcanist, Freelancer, or other such experts. To do otherwise was to invite dangers beyond anything known within the walls of a town. And to discourage such invitations, the Sentinels enforced a punishment most severe: three fingers cut from the left hand.

Such were the times.

But the mean-faced girls had no respect for rules, lacking parents to teach them right from wrong. And so they employed their curious and creative minds to reveal the box’s function.

Before long, they found they could slide the panels along invisible planes. With each slide, the box changed shape in the most indescribable ways. Twelve sides became sixteen; sixteen became twenty-three; twenty-three became eighteen. And with each change, an incandescent beam poured from the tiny hole. It glowed like fire and twinkled like ice.

The strange light changed whatever it touched. It changed an empty crate into a chunk of stone staircase. It changed a munitions shelf into a feather bed. It changed a section of the vault’s wall into a geyser of purple liquid filled with astonished squid. And some things changed into other things that were not easily described—a merging of materials both familiar and strange into shapes that bothered their eyes.

Soon, the vault had gone beyond all reckoning. But the two mean-faced girls cared little for that—they laughed a horrid, beastlike laugh at the bizarre shapes they had created.

But then, when they turned the beam on a juvenile grabbit, which they discovered trapped in a strider container, and changed it into a brass latrine… well, that’s when their amusements gave birth to A Very Bad Idea.

“Everybody hates us,” whispered one.

“I’m not fond of them much myself,” grinned the other.

“They thrill at telling us what to do, and what not.”

“Such overbearing tendencies. It cannot be good for the digestion.”

“They are in luck. The right medicine for such has just now come into our possession.”

And when they came upon the Sentinel Captain’s home, the two girls changed her dog into a half-turtle, half-saurian. It did not survive the night.

Then the girls perched their pale bottoms on the highest battlement and set to laughing a horrid, beastlike laugh at all they’d wrought: the terrified wailing of the fishmonger’s wife; the inferno at the cypher headmaster’s home; the growing squall in the central bazaar.

But, in time, the two mean-faced girls ceased their wild snickering and merely stared in disbelief.

“Do you think maybe we’ve tortured them enough?” one ventured.

“We could always save some for tomorrow,” the other smiled, weakly.

So, they turned the box to face the town in general and worked to bring the puzzle back to its original shape—to reverse all they had done.

But in trying to master the puzzle, the puzzle itself grew ill-mannered. With every twist and turn, the town began to change in awful ways. At first, the residential quarter rose upward and folded wholly into the Freelancer guildhouse. Then the Sentinel keep twisted into itself like the braid in the schoolteacher’s hair. The storm in the market became a tornado of slicing metal, rending the houses apart with a crashing shriek. Distantly, the screams of the villagers reached the girls’ ears.

With growing terror in their hearts, they twisted and turned; rotated and pushed; rearranged and repositioned. As they did, the world before them began to unwind. The entire plateau on which the town stood ripped itself free and was hurled through space. The mountains crashed upwards into the sky. The sun drew itself into a thin line and wound itself around the horizon.

The girls clung to the box as they were surrounded by the scrambled chaos—the only home they’d ever known—and were lifted into the air. For a moment, all there was pandemonium—all they could hear was each other’s screams.

And then they crashed to the floor of the vault.

When they looked around, nothing was changed. All was as it had been before. And the box— it floated down between them, ominous and steaming, rolling to one side as it touched the ground.

With tears raked across her face, one turned to the other and said, “Perhaps… perhaps it is wise not to touch strange objects, as the grownups have said.”

“Yes,” the other whispered. “As they have said. Time and again.”

In that moment, the Captain’s glimmer flared brightly, and they wondered at it.

Then the door to the vault crashed open and in rushed the Sentinel Captain and three of her largest town guards.

When she saw the girls lying where they fell, with the box between them, she crossed her arms and looked quite cross indeed.

And so, the Captain, with her bandaged and baleful hound standing watch, locked the girls in the stocks and held them before the people. After all the traumas and horrors were recorded, the townspeople insisted that the mean-faced girls must lose three fingers each—no less than the law demanded.

But the Sentinel Captain frowned and spoke with a grim voice. “I’ve let you all down. I let the soft spot in my heart act in defense of these mean-faced children. We must all always do whatever it takes—indeed, more—to protect our way of life. That is the spirit of the law, if not the letter.” Then she turned the strange object on the children, and it mutated their bad little faces into horrible visages.

Bony protrusions erupted from the first child’s face. Between them, tufts of coarse black hair grew in gnarled curls. Her eyes turned white-blue and her skin molted off, growing back sallow and blotchy. The other was worse: one eye swapped position with her mouth, wiggling tendrils protruded from her cheeks, and her voice evoked a spoon scraped on rusted metal.

As the children howled a howl so pitiable, the Sentinel Captain turned and held the strange box up to the silenced people.

“Do not. Touch. Strange objects.”

The townspeople nodded in reply.

Forever after, the two horrible-faced girls were unbearable to look upon. Because of that, they were feared and shunned by all they encountered, and they lived alone with each other until they died.

Don’t forget, today (November 25) is the last day players can use crystals from the Season of Skulls event.

According to BioWare, another seasonal event is on the horizon, though they’re not ready to share what this event is all about just yet.

Enjoy this upcoming season while you can, as there’s a reputable report that Anthem will transition to something else completely soon.