Looks like Sony is spoiling the fun for Xbox One and PlayStation 4 Ark players. Posting on Twitter, an Ark: Survival Evolved developer confirmed that crossplay is actually working internally, but “Sony won’t allow it” to be implemented into the public build.

You can see the dev, Jemery Stieglitz, responding to an eager fan in the tweet below: 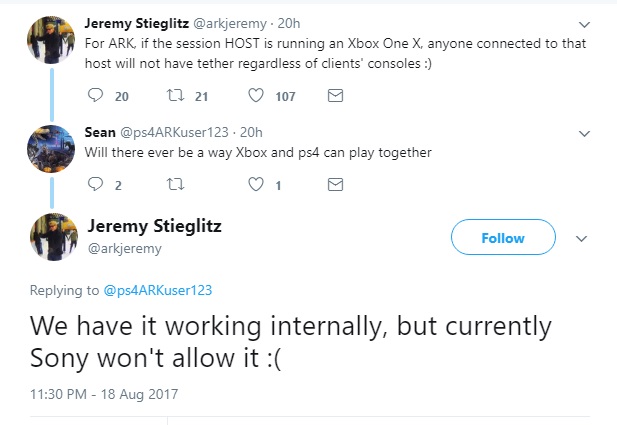 It’s good to see an honest developer keeping his community informed. Here’s hoping it doesn’t land him in trouble!

It sounds like Microsoft is all for crossplay, so now we’re just waiting on the big “S” to play nice! Come on Sony, why you gotta be so mean?

What do you make of this news? Want to see Sony and Microsoft work together to implement crossplay? It sure would be cool to see more games sharing their player counts across platforms, helping to boost the longevity of multiplayer titles. Let us know your thoughts in the comments.