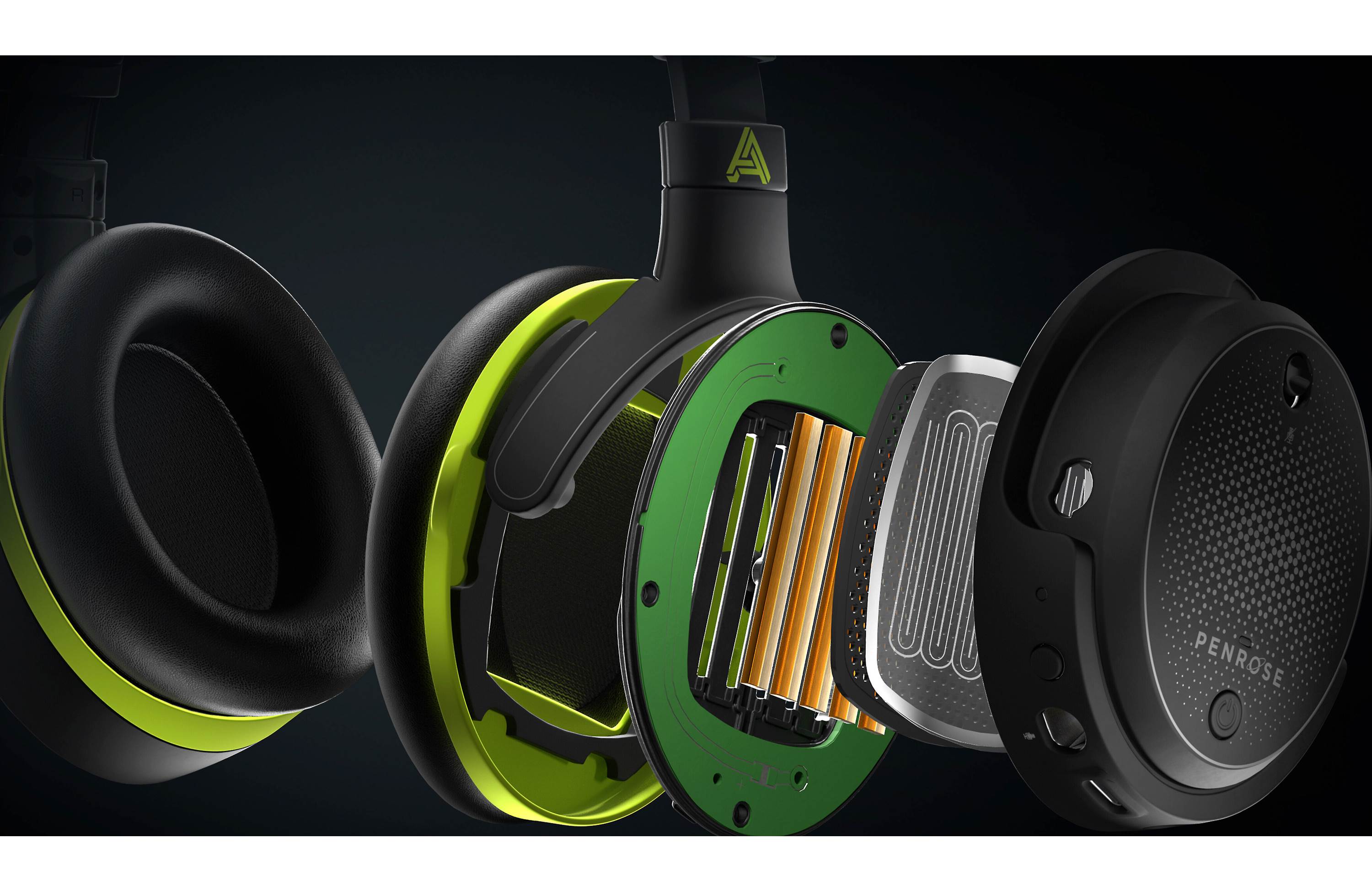 Audeze is back again with yet another headset, and this one is a tad cheaper, and is geared more for console gaming than its higher priced big brother, the Audeze Mobius (read our review of that here). While the Penrose is $100 cheaper,  it is stil an uncompromised premium headset that console users might want to take a look at. How does it perform? Read on for our in-depth Audeze Penrose review.

From a design perspective, the Audeze Penrose features a near identical design as its older and more expensive brother, the Audeze Mobius. The banding is as flexible, the plastic material is as durable, and the ear cup cushioning is as comfortable as its premium version. No cuts there, despite being $100 cheaper, and it certainly feels better suited for console gaming whereas the Mobius was geared towards PC.

Because of the price difference, the Penrose does have differences than its more premium sibling in a few areas, them being surround sound, 3D audio, and the head-tracking capability (a PC-only feature anyway) from the Mobius set.  I am a bit bummed out at the fact that there is no built-in 3D audio, although on both the Xbox and PS5, users can make use of the consoles’ onboard audio engine, such as Tempest or Dolby Atmos for 3D audio. These are great alternatives, and the PS5’s Tempest engine shines exquisitely with the Penrose’s 100mm planar magnetic drivers. 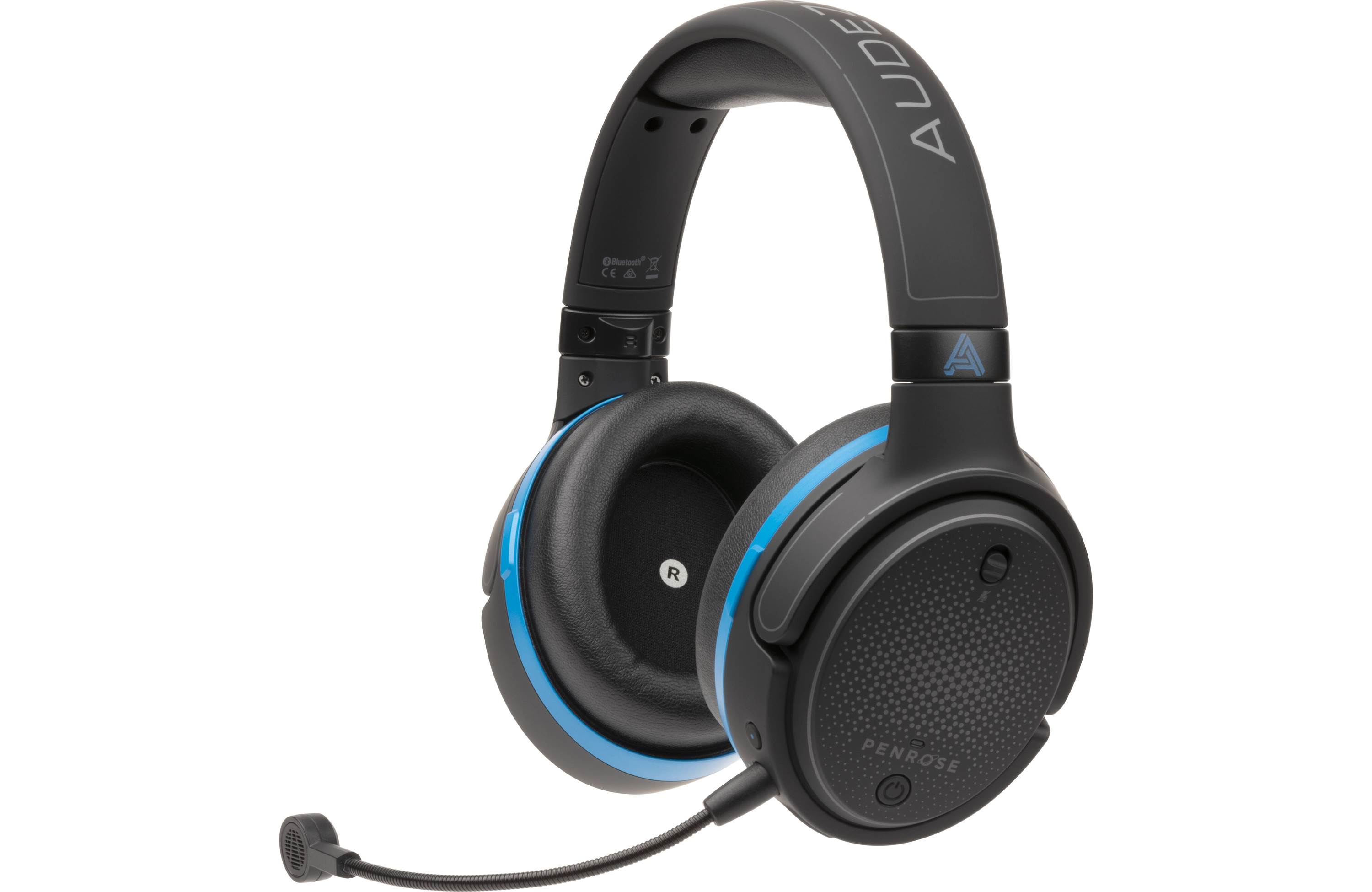 The dials on the Penrose feature volume controls for chat (so you can hear yourself) and the incoming sounds. As for connectivity, you can either use Bluetooth, the 3.5mm analog cable, or the most likely option, the USB wireless dongle.

Both the PlayStation and Xbox variants of the Penrose come with this USB dongle, and perhaps where the Penrose does have an upper hand over the Mobius is the ease of wireless connectivity. In order to use the Mobius as a wireless headset, you need to use Bluetooth, otherwise you’re stuck with using one of the cable connectivity options. The Penrose fixes that by providing you with an easy to plug USB dongle that not only works on consoles, but on PC as well.

Another improvement that the Penrose has over the Mobius is that it features a longer battery life, although it’s not by much. Whereas the Mobius could hold a charge up to 10 hours, the Penrose ups that to 15 hours on a single charge. Like I said, not much but it is a step in the right direction, and all considering the drivers used in both the Penrose and Mobius, that actually isn’t all that bad.

The Microphone is really the big change here. It still maintains the same flexible boom arm seen in the Mobius so users can adjust the mic close or away, but the difference is the shape of the mic itself. The Mobius offered more of a rounded rectangle shape, whereas the Penrose had a circle end. I’m not sure if this actually improves anything if I am honest, but it is something I thought should be pointed out. It is still detachable though, which is always a major plus.

So while the Penrose does lack a few features from its older brother, and is cheaper, Audeze has made an effort a bit to try and improve in some areas. They aren’t big improvements, but they’re welcome ones, and in a market filled with many headsets, it’s actually nice seeing one for a change that feels largely comparable to its premium predecessor.

Comfortability is the same great feeling from the Mobius in the Penrose, and the fit is snug and airtight, keeping all sounds inside the ear cup in, and sounds outside out. It’s a fantastic design that holds no quality sacrifices when stacked against its older brother. While yes, it is a familiar feeling, it’s one that’s being brought to a more affordable price entry. Although, I suppose the big question is whether or not that holds true for the sound quality.

Being a $100 cheaper, you would expect to see some sort of cutbacks when it came to the Penrose overall audio. Yes, there is no 3D and surround sound built into it, we did make perfect usage of the 3D profiles offered from our PS5 and Xbox Series, and we have to say the Penrose is well suited for these machines.

Plugging the dongle directly into the USB port, pairing only took a matter of turning the set on. Of course, we had to change our audio settings on the consoles, but once we did we were off to experience yet another incredible immersive audio experience that Audeze provided with the Mobius.

Sounds flooded in rich tones playing titles like Deathloop, and Psychonaut 2. Deathloop takes full advantage of the PS5’s Tempest engine, and hearing the high adrenaline rushing ’60s music play as bullets zoomed, and shot past us was just all too exciting. The same could be said about Psychonaut 2 on Xbox, and with the Penrose I never felt like I missed a beat of the moment as my ears were filled with joyful, acid-trip inducing sounds. 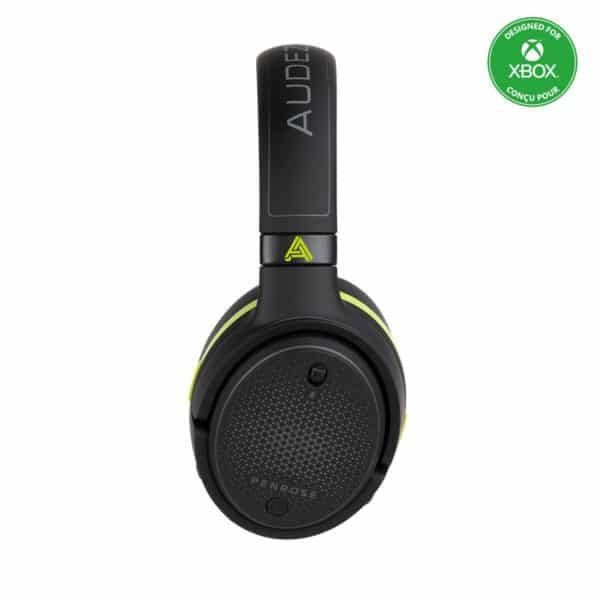 With the 100mm drivers in the Penrose, I felt like I was unlocking the full audio capability of these consoles, despite each of them having their own dedicated sets. The difference is vast in these drivers, everything is more clear, more distinct, and more impactful than any 60mm or below non-planar magnetic driver headsets I’ve used in the past.

I would even argue that it may sound better than the Mobius, at least when it comes to the “out of the box” experience. Sounds have better tuning, and felt like they came in with higher range. Not louder, just more detailed. It’s clear (pun intended) to us that the Penrose was better designed for console use than the Mobius, though that doesn’t deter the latter in any way. Because the Mobius is more for PC usage, there are more customizations offered with it. But in a head to head for console connectivity, usage, and performance, I do think the Penrose is the better set. No surprise all considering the console market is the one it’s aimed towards. Regardless, if it’s immersion you seek, then you’ve found the right headset.

As for the microphone quality, I can’t say I heard too many complaints from any of my friends during testing. Feedback provided was that my voice was clear, with background noise kept at a pretty modest low. This was based on the wireless dongle connection, with the wired 3.5mm connection producing better clarity. Of course if you aren’t too big on multiplayer games or joining chat lobbies, the microphone won’t matter much to you and the nice thing is, it’s completely detachable. A great option that I firmly believe every headset out there should have, as not only does it give you the assurance that someone isn’t listening in during a match, but it adds a bit to the overall style of the set by removing an unwanted feature.

So with the Penrose, we essentially have a stripped down version of the Audeze Mobius, built specifically for console players. What it lacks won’t be missed due to the systems offering those features, and coming in at $100 cheaper, this is easily one of the best, most affordable planar magnetic driver headsets out there. $300 places it right in that range of being a high-end gaming headset, and comparatively, that does put it in a position against some very tough competitors. However, none of them will produce the immersive quality you get with the Penrose, not as long as they continue using old standardized drivers.

Audeze may produce headsets that are well within the luxury pricing, but they do so knowing that they are producing some of the best on the market. And for console players out there, the Penrose is one of the bests that you won’t regret buying.

A review unit was provided by the manufacturer. You can purchase the product here for $299, You can read SP1st and MP1st’s review and scoring policy right here