343 Industries is making good on their promise to bring free content to Halo 5: Guardians, starting next week with the just-announced “Battle of Shadow and Light” update.

According to the studio, the update will mark the arrival of the 8v8 Big Team Battle playlist along with four new Big Team Battle canvases, aka Forge Maps: Deadlock, Basin, Guillotine, and Recurve. According to 343, the first set of maps “present just a hint of the content featured in next month’s update.” So, it sounds like there’s more to come.

In addition to next week’s content, a healthy dose of new items are being added to Halo 5’s REQ system, including new armor sets, weapon skins, vehicles, emblems, and a new assassination move. Check out the new REQs below: 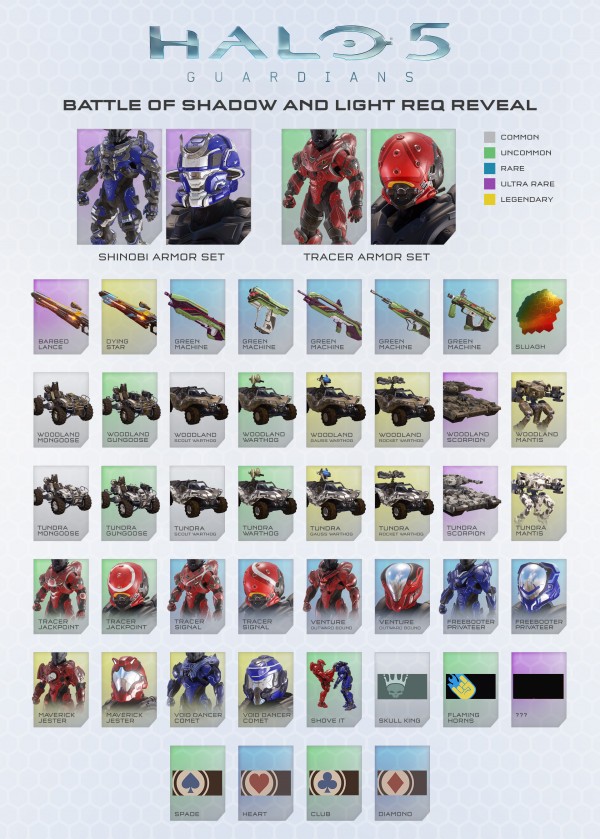 It doesn’t sound like 343 has nailed down an exact launch date for the update just yet, other than “next week,” but we’ll keep you posted.

As for this weekend, Multiplayer Designer Quinn DelHoyo has made the call, suggesting that Team Doubles will very likely be the featured playlist, according to votes.

Looks like we have “Doubles” as our new weekend playlist. Will let you know when it’s live tomorrow morning.

What are your thoughts on Halo 5: Guardians’ first free update? Excited to hop into some Big Team Battle next week?