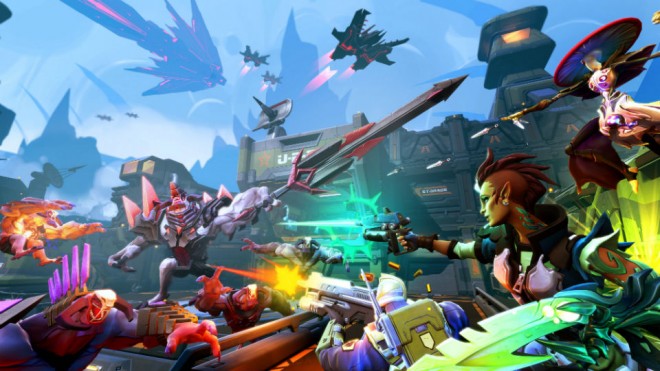 As Gearbox Software’s upcoming hero shooter, Battleborn, draws closer to its early May release date, the studio has been slowly pulling back the curtain on the 25-character roster that will be available at launch.

Thanks to a pair of recently released videos from the development team, we get our first look at the 19th and 20th heroes: Attikus and Galilea. Along with the footage, we also get a detailed look at their abilities, background information, and skills, courtesy of the PlayStation Blog.

“Slave. Laborer. Greatest warrior among the Jennerit underclass — the Thralls. All his life, Attikus has been told what to do, shoved into the deepest mines of Tempest, and kept down. Thanks to an experimental biotech harness, this already-imposing brute was given the one thing the Jennerit didn’t expect: intelligence.”

“A sacred order within the Eldrid, the Arbiters of Being were charged with undermining the Jennerit Empire’s technology, and Galilea was its most promising warrior. Entrusting her with a long undercover mission, Galilea was embedded within the Jennerit and worked her way through the recruits of the Silent Sisters.

During an attempt to sabotage their Sustainment technology, Ambra discovered and attacked Galilea, mortally wounding her. Once a close friend, Ambra attempted to use Sustainment to save Galilea’s life but it was only partially successful. Now unstable, immortal, and reeking of life-draining dark energy, Galilea is at war with herself and her new powers as she hopes to find a new purpose among the Peacekeepers.”

Check out details on the two previously revealed hero characters, Deande and Gahlt.

Battleborn is to be released on May 3 for the PC, PlayStation 4, and Xbox One platforms.