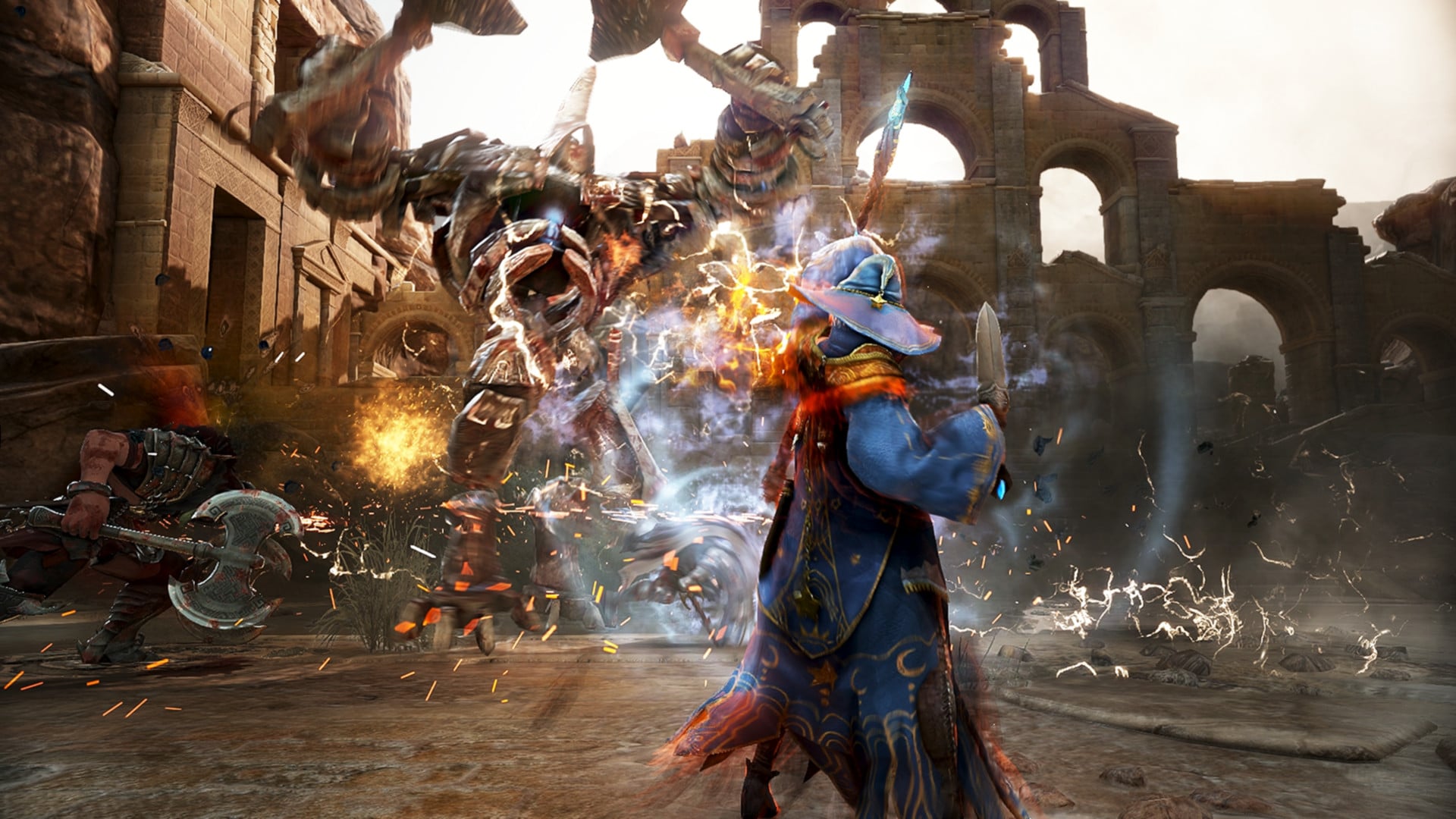 ● The main quest for O’dyllita part two follows the ‘[Lv.60 O’dyllita II] The Gem of Imbalance’ has been added
– In order to proceed with the quest, you must have completed the ‘[O’dyllita] Keepsake of Ataraxia’ quest from O’dyllita part 1.

● Added new Hunting quests.
– Adventurers who have completed the True Hunter quest can receive the New Legend quest from Verita of Port Epheria.
– Completing the quest line will allow you to receive 3 daily Hunting quests from Roussea of Narcion.

● Added Breath of Narcion as new item that can be obtained by defeating Hunting monsters in Narcion, O’dyllita.

New Hunting monsters have settled down in the southern fields of O’dyllita, Narcion. You can obtain the Breath of Narcion by defeating these monsters from which you can make a higher tier Matchlock. Also, completing the new Hunting questline will allow adventurers to learn new actions that makes quick use of the Matchlock. Defeating Hunting monsters in Narcion will give you stuffed furnitures that allow 1 hour buffs, but upgrading them will boost the duration of the buff to 3 hours. Upgrade feature of other stuffed furniture are being planned to be added later on.

● Roussea, the Hunter of Narcion, can now exchange Usable hides and Supreme Hides for Damaged Hides and Usable Hides.

● Added 30 Artisan’s/Masters Special stuffed items that can be crafted through Hunting.
– In order to make these Special items, you require the use of the Breath of Narcion item that can be obtained by killing monsters in the Narcion Area.
※ Special Item production can also be made using Omua’s Breath, which can be obtained while hunting in the future when the Mountain of Eternal Winter is added.
– Special stuffed items can be made by combining the materials together. The buff duration from the items will increase to 3 hrs.

– You can find information regarding these items in the Crafting Notes.

● A new daily quest has been added that can be received through Liana and Ludwig.
– Daily quests can be picked up from Liana in large cities.
– The following Daily Hunting quests cannot be received together, and only one can be selected per day.

The way pets acquire loot, as mentioned in CalpheON Episode 2, has been improved. Previously pets had to follow the character when the character moved, so the more the character moved, the slower the speed of picking up loot. As many adventurers have constantly provided their opinions on the topic, we have had a lot of discussions and tests to find a way to improve this situation, and we have been able to improve the way pets behave by looting items first. After this change it is expected that the chance of missing loot even when moving around a lot will be eased.

● Adjsuted the amount of Parley consumed per Barter to be reduced by 0.1% per Barter Level from Master 11 to Guru 50.

● Reports of rare animal sightings from all over are reaching some seasoned hunters. Many hunters living in quiet seclusion in Behr have gathered to put together a Rare Hunting Guide. You might be able to get special information about these rare animals by becoming friendly with the hunters.
– Added [Knowledge – Ecology – Rare Hunting Guide] Category
– Added the following rare monsters for hunting.

– You may be able to obtain knowledge by hunting rare animals, and obtain the following titles.

– You can get the [Bonus] Hunting quests by chance if you hunt the following animals.

Rare animals have been sighted in the Black Desert world. They are hard to find, but we hope that coming across these rare animals, filling out the Rare Hunting Guide one by one, and obtaining new titles along the way will add a new element of enjoyment for our Adventures.
We will continue to add new rare animals with their own unique characteristics—please stay tuned!

You can also get information on the rare animals from the villagers living in Behr, which may soon become a booming hunting village!

We also added [Bonus] quests to hunting; all you have to do is complete some rather straightforward quests to receive rewards unique to each region and short but powerful buffs.

The importance of accuracy has steadily moving towards the forefront of players minds, regardless of whether it’s in PvE or PvP. Accordingly, attack decision effects were added so that you can check the Accuracy of your character’s attacks. With this change, you’ll be able to set a clear goal for your gear or experience for yourself the Accuracy of your attacks when fighting against monsters that are much stronger than your character’s level.

● Added “Miss” to be displayed when your attacks miss so that you can more clearly recognize instance in which you miss attacks or successfully evade.
– You can activate the settings for this feature by going to the Show/Hide tab of the settings menu. 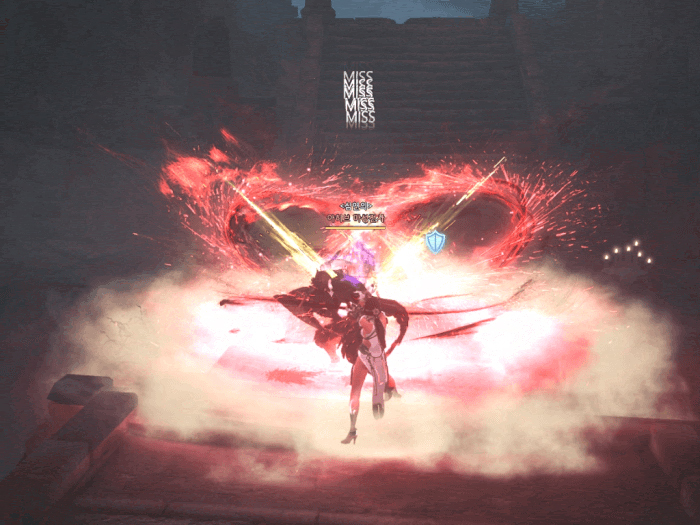 ● Changed the damage of the following skills as follows

Musa
● Changed the following to Tiger Blade:
– Changed the area of Attack 1 to match the area hit with the blade.
– Fixed the issue where Prime: Gale skill damage was not applied.

Maehwa
● Blooming – Added to the Skill Guide.
● Black Spirit: Maehwa: Decapitation – Fixed the awkward text about the number of hits.

● Changed the damage of the following skills as follows

Dark Knight
● Cluster of Despair – Improved on the issue where the damage was not applied when used at different height from the target.

Guardian
● Flow: Low Blow – Fixed the issue where the Down Smash on the skill was not being applied.

As we mentioned during the CalpheON – Episode 2 Q&A session, we have adjusted the cooldown for all elixirs. You will now be able to drink a variety of elixirs in content such as party monster zones with shorter cooldown times. Please drink responsibly.

● Reduced the cooldown of Elixirs, Enhancers, and Damage Reducers from 10 sec to 1.

● Improved the appearances of the following NPCs that you encounter during the Balenos main questline:
– Igor Bartali, Edan, Jarette Domongatt, Emma Bartali, and Eileen

● Improved so that you can auto-skip quest dialogues.
– To use this function, press □/X when talking to NPC’s during quests.

● Improved to not reset your scroll on the page you were previously on when you re-open the Skill (K) window within 30 seconds of closing it.

● Added a new colored icon for a Fence with crops that can be harvested or undergo plant breeding when viewed on the World Map.

● Added a feature that automatically aligns items on the Central Market Warehouse.
– You can not only use the Auto Arrange function but also sort by Item Grade, Enhancement Level, Weight (LT), Capacity (VT), and Gear Slot in Descending and Ascending orders.

● Added a phrase to the ‘[Event] Kuku’ pet stating that only one can be taken out at a time.
● Reworked the background music playback system to play music according to the individual styles of the five major regions in the continent.
– The playback system will now play several tracks in succession, instead of repeating The same track over and over again for The same region.
– Combat music will now fade while fighting normal monsters; in areas with constant combat, music that best suits the specific region will play.
※ We plan to add horse riding music in a future update.