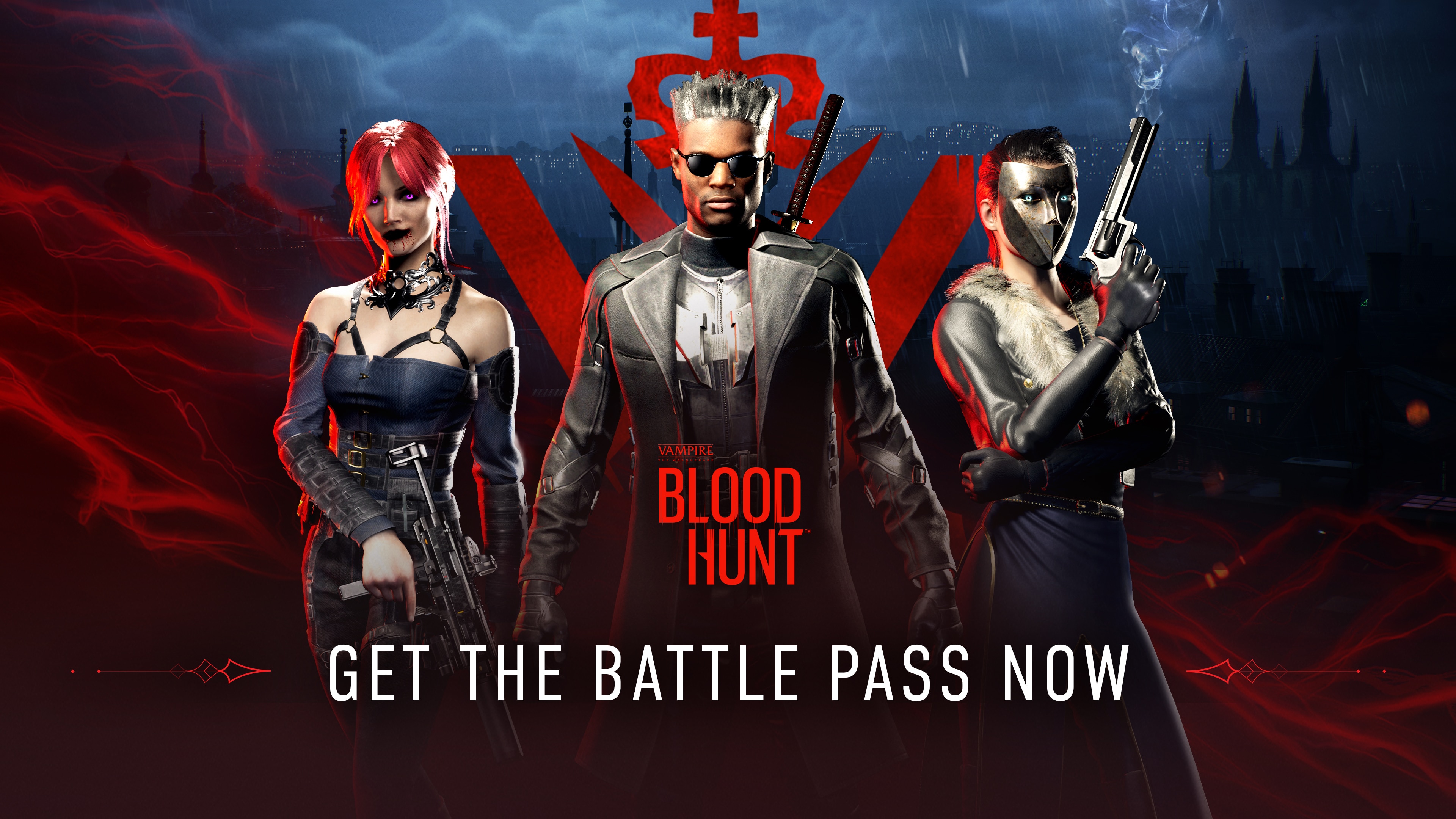 Sharkmob has finally released the Bloodhunt battle pass, allowing interested players to start earning levels for 100 tiers of different rewards! The battle pass will be available until mid-July, and the studio unveiled a launch trailer for the pass, which you can check out below.

As for what’s in the Bloodhunt battle pass, here is a rundown of some of the rewards included:

With the new Ventrue Enforcer Archetype entering Bloodhunt, you will find plenty of outfits and items to customize your Enforcer and dominate the streets of Prague in style! However, the Season 1 Battle Pass is not just about Ventrue. In fact, the main rewards that you can obtain are useable on any Archetype.

The Battle Pass will begin on the 29th of April and will be active until the middle of July. The premium battle pass costs 950 Tokens, which is the equivalent of around 10 USD.

As you progress through the levels, you will earn over 85 vanity items in different styles that vary from classy Ventrue suits to athletic streetwear outfits. On top of that, you will unlock a total of 1,300 Tokens for finishing the Battle Pass, which means that you will have more than enough to buy the next season’s Battle Pass should you choose to do so.

Over 100 items available to earn throughout this season from outfits to accessories, emotes, currency packs, XP boosts and more! Everything you gain before the season is over is for you to keep and use forever.

Get the Battle Pass for 950 Tokens and play through its Tiers to unlock up to 1300 Tokens. Spend them on your next Battle Pass or any items you desire from the Bloodhunt store.

Jump right into the battle

To get the Battle Pass, start your Bloodhunt game and check the Battle Pass tab in the store. Pick one of the available offers and you’ll be ready to fight and keep unlocking new rewards as you play!

In case you have any more questions, you can consult this battle pass FAQ for Bloodhunt:

Q: What is a Battle Pass?

Players looking for the ultimate customization can purchase the Battle Pass for 950 Tokens and get access to unlock over 100 items including Legendary, Epic, Rare and Uncommon outfits, accessories, emotes, currency packs, XP boosts and more!

Battle Pass Bundle unlocks your ability to gain all the rewards of the Battle Pass and be the first to stake out your own style with instant access to the first 20 Tiers of rewards.

Q: How do I buy the Battle Pass?

Q: What happens if I buy my Battle Pass late in the season?

You will receive all the rewards up to your Battle Pass level (which is your current level for the season), retroactively! For example, if you are on level 20 for the season when you buy the Battle Pass, you will unlock all rewards for every level up to 20.

Q: Can I keep leveling my Battle Pass after the season ends?

No, you can’t continue to level up the current season Battle Pass after the season ends.

Q: Do I keep my stuff after the season ends?

Yes! You keep every Battle Pass reward you have unlocked after the season is over.

Q: What if I don’t buy the Battle Pass? Can I still earn rewards for free?

Yes. Even if you don’t purchase the Battle Pass, you can still earn the available free rewards as you continue to level up.

Q: If I buy the Battle Pass, can I also get the free rewards?

Yes! Everyone can earn free rewards during the season.

Q: I bought the Battle Pass by mistake; can I get a refund?

Once a Battle Pass has been purchased, it is non-refundable.

Bloodhunt is now available on PC and PS5.