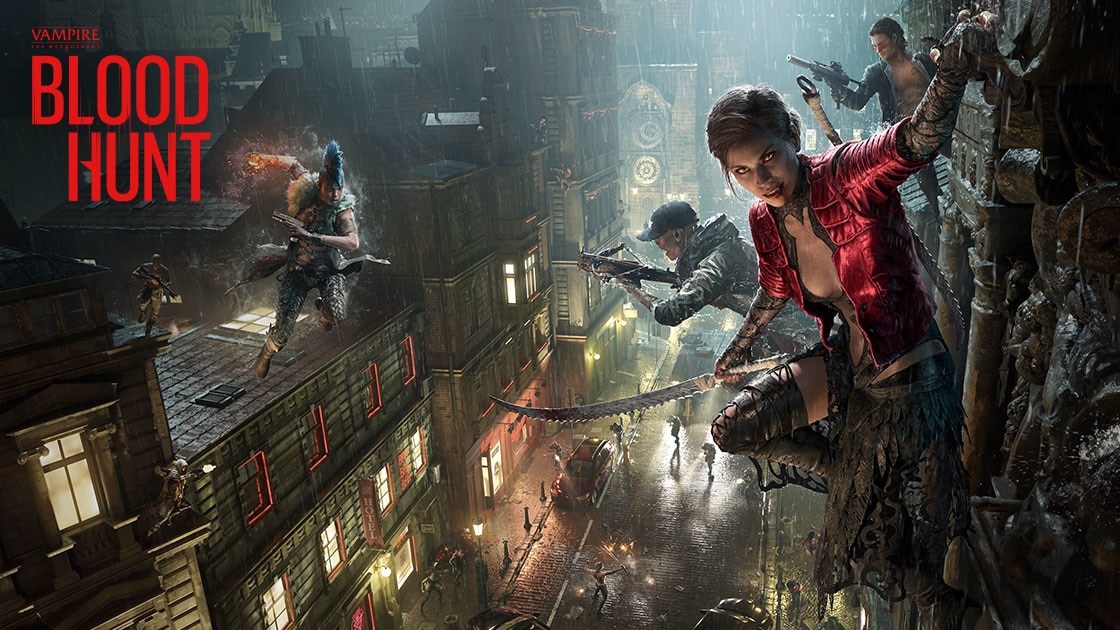 The following Closed Alpha Learnings come from those two days of testing, and they may or may not appear in the game’s launch. Check them out below.

The most requested feature by far is the ability to play Bloodhunt with your friends.

This is a feature we always planned for Bloodhunt, but the focus of the Closed Alpha was mainly to stress test our servers and get some initial feedback. Therefore, we decided not to enable the play with friends feature as it was not critical for the test and not yet where we want it to be from a quality perspective.

We are hard at work with finishing this feature and having it ready for the release of the game. You will be able to invite your friends into the Elysium which you are in, and then group up with them from there.

However, you will not be able to use this in Solo mode, not even when you are wanting to play against friends. The reason for this is because it could be exploited by people teaming up against other players in solo mode which goes against the spirit of fair play and the rules of the game. Needless to say, getting caught teaming up in solo will lead to a permanent ban from the game as we do not tolerate cheating.

Traversal is an integral part of Bloodhunt, and our intention is for you to have a great flow when it comes to the running, jumping and climbing aspects of the game.

During the Closed Alpha, a few players mentioned that they would sometimes get stuck on certain objects, or being unable to climb on top of specific objects or locations. We looked at many of the cases that you reported on our Discord and we will be working on improving this further to fix any issues which may appear on the map. This will be an ongoing effort as we release the game and keep improving the quality of the map.

If you experience those issues, please keep sending us details on Discord with a video showing the location where it happens, and we will do our best to keep improving the game in this aspect.

We got a lot of comments about the archetypes and the various abilities and their balance. Something that really stood out was the amount of feedback that we got around the Nosferatu clan. Our telemetry data could confirm that they were very capable of being competitive against the other clans.

Our intention with Bloodhunt is to have exciting archetypes that cater to many different playstyles, but at the same time being balanced against each other.

Getting the balance right will be an ongoing process and is likely to get updates and tweaks as more people learn to play the game and find ways to excel with the archetypes.

Additionally, when a new clan gets introduced, we will need to ensure that all of them have a place in our game and are competitive and unique with their own unique playstyle.

We will share more details about the changes that we make to the balance once the game has been released and we have had the chance to warm up with the game update process for Bloodhunt.

We understand that some players had long matchmaking times, particularly those within a region that may not have had the highest number of Closed Alpha participants locally. The Closed Alpha had a limited number of slots due to the nature of the test being about getting early feedback and giving us an opportunity to test our systems with real players across the world. As such, we expect the matchmaking times to decrease drastically once there are no limitations on the amounts of players who will be able to play Bloodhunt.

The game is also dependent on the good word of our players, so we would appreciate if you spread the word about the game amongst fellow gamers as a healthy number of players across the world will decrease the wait time for matchmaking.

As a back-up, we will also implement a failsafe where if a matchmaking session takes too long, the game will start to look for games outside of the player’s intended region.

While this is not optimal and may lead to net code issues due to bad latency and in the worst case, even packet loss, we still think it’s better to give you the opportunity to play the game, than not at all.

We saw that a lot of our players had a lot of fun in the Closed Alpha Test with trying out the cosmetics that were available and, in our survey, we saw many that could not get enough of them. As the Closed Alpha was for testing purposes for a limited period, with no progression being saved, we wanted to limit the available options so that you would spend more time playing the game.

Once we start our live service, we will be continuously adding cosmetic items, and keep an eye on both our community and telemetry data to see what types of items you would be interested in having within Bloodhunt.

We are very excited that so many of you have a desire to fulfill your ultimate vampire fantasy and we cannot wait to see what unique combinations you will come up with!

The Red Gas is Too Slow

Looking at your feedback and our telemetry data it’s clear to us that the Red Gas moves too slowly during the end phase of the game.

We have therefore rebalanced the Red Gas behavior and its movements according to the various phases of a match.

With these changes, our intention is to decrease the number of passive playstyles towards the end of the game and push everyone that has survived into one last epic conflict!

Session pacing is something that we want to get right so we will be continuously tweaking related parameters for the foreseeable future.

In the Closed Alpha you got a chance to try out an unfinished version of our gamepad implementation.

While not fully complete, we felt that it was important to include it for the test so that we could get your feedback on it and because we know that there are many players who only feel comfortable playing with a gamepad.

We will keep polishing the gamepad experience to ensure that Bloodhunt delivers a great experience with a gamepad too.

Finding the Right Size for the Pacing of our Game

When we were developing the map and planning for its size, our main goal was to find our own unique play pace and not focus too much on what other games in the same space are doing.

Bloodhunt does not have a lot of large open spaces and empty fields, and instead focuses on getting players into combat quickly and having them constantly adapt to the circumstances in which the Red Gas is unavoidably closing in. At the same time, because we are in a dense city space with lots of buildings, there are many opportunities to find strategical flanking routes to outsmart your opponents or quickly seek cover by using the wall-scaling abilities of the vampires. During our internal playtests we found out that this really gives our game its own unique flavor in being truly intense, fast paced and action packed.

With that said, we will be keeping an eye on how this will work when players eventually master the game and understand how to fully utilize its mechanics.

We heard feedback that some players would like to have more advanced key bindings, and here are the latest improvements that we have been working on:

The movement keys are now re-bindable – this was high on the list for players using certain regional keyboards.

The hotkeys for using consumables are now re-bindable as well.

We also fixed a bug with the Pickup/Interact/Feed button which happened if it had been rebound.

We will continue to gather your feedback on this and see if further improvements are needed down the line.

Sharkmob has also very recently announced on Twitter that the game will be showcased further at gamescom, during the Opening Night Live event on Wednesday, August 25.

We are very excited to tell you that #Bloodhunt will be in the @gamescom Opening Night Live show with @geoffkeighley! You don't want to miss this! pic.twitter.com/HadudeapH3

Vampire: The Masquerade – Bloodhunt is set to be released at a still unannounced date. It is now available to wishlist on PC via Steam.