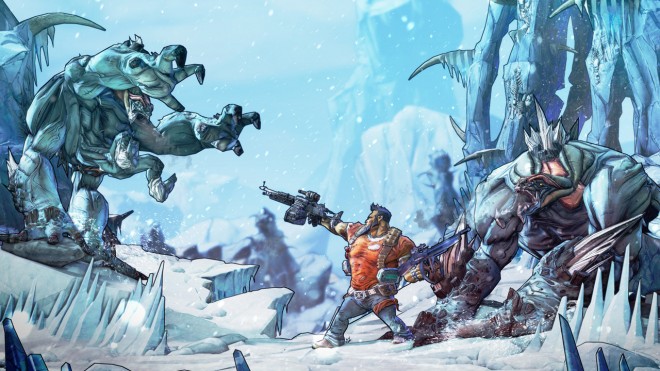 Borderlands 2 – Length of Campaign Revealed, Details on the ‘Badass System’

Borderlands 2, successor of the action packed RPG first-person shooter Borderlands by Gearbox Software, will boast a phenomenal 58-hour campaign. Yes, you read that right – 58 hours of content according to Gearbox’s VP of Marketing, Steve Gibson. And that’s just for one of the five character’s available.

In today’s first person shooter market, a 58 hour campaign is extremely impressive to say the least, when the norm in this day and age for this genre is to contain relatively short campaigns consisting of 10-13 hours max, like most AAA titles.

In an interview with GamerZines, Gibson also goes on to say that all of this will be on a PvE system and that the PvP aspect of the game is being scrapped due to it not being popular enough to stick around for the sequel. For those of you who enjoyed the PvP aspect in the Borderlands and wonder why they came to this conclusion, Gibson answers, also detailing what exactly will be taking its place.

It was hardly used, so what we invested in instead was the co-op stuff. Like the “Badass Ranking System” is kind of a measure of stick which says, ‘Look how awesome I’m doing in this world.’ So what we’ve invested in rather than Arena stuff is drop in/drop out split screen co-op, and being able to readjust your quest line a little to match up with other players.

To go into further detail of the Badass Ranking System and how it works, it  is essentially a feature that will net you points, or in this case, ‘Badass Points’ which can be converted to Badass Tokens. These points can be gained by doing death-defying feats, or simply Rambo’ing your way through Pandora’s many foes.

When you earn enough tokens, you will be able to permanently unlock stat-boosts for ALL of your characters in your profile. For example, some of these may include having a bigger grenade blast radius or upgrading the amount of damage your weapon deals.

Not only are these permanently unlocked on all the characters to your profile, but they are also stackable to each one, which will make it much easier if you were to start replaying the game on a new character.

For those who are still on the fence on this new feature and would rather not use it, the fine folks at Gearbox has stated that this can be turned off at any time you want to.

In case you missed our recent articles on the new game play featuring the revamped Sanctuary town and Stash feature, we got you covered. Also, make sure to check out the latest trailer released by Gearbox called ‘Wimoweh’