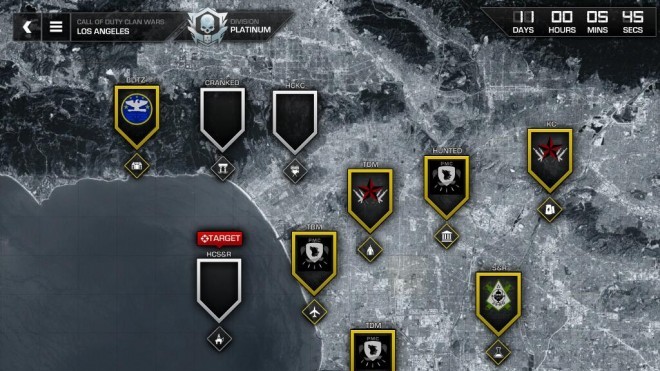 If you’re excited about participating in Call of Duty: Ghosts Clan Wars, but are having a tough time simply figuring out what to do or how to effectively kick ass, you may want to listen up and hear what developers Infinity Ward have to say about capturing, defending and losing nodes.

“The primary objective of Clan Wars is to earn as many Capture Points (CP) as possible throughout the Clan War,” writes Infinity Ward in a recent blog post. But you probably already have a good understanding of that concept. Your Capture Points will continue to add up, even if you lose a node to another Clan.

This indicates that your Clan needs to tbe the first to acquire 40 wins in Kill Confirmed. “Wins are counted individually on a per-player basis,” reads the blog. Kill Confirmed matches played in regular playlists also count towards your progress. Also important to note is that the more Clan members you are with when winning a game of Kill Confirmed, the more points you get towards your progress. Playing by yourself will earn you one point, while playing with five others will net you a total of six.

Should your Clan be the first to acquire 40 wins and capture the node, there are two things you need to consider:

Now that your Clan is holding on to the node, other Clans will be able to attempt to knock down your score of 40 to zero by winning matches of Kill Confirmed. You can get back into the fight and attempt to keep your score up to hold on to the node for as long as possible, but remember that you are facing off against every other Clan currently in the war. Infinity Ward’s blog also indicates that “there is also a maximum number of wins that your Clan can attain for each node to ensure the battle for each node is competitive. Once you reach that point, your win total cannot go up even if you keep winning matches although your in-game XP bonuses will continue.”

Should your score on that node be reduced to zero, it will once again become available to capture by other Clans and you will lose your XP bonus associated with that node. Other Clans – or your own Clan if you decide you want to recapture the node – will now have the opportunity to earn 40 Kill Confirmed wins once again, starting from where they last left off once the node became locked.

“Call of Duty Clan Wars was built in this way to ensure no one Clan can dominate every node and the associated XP boost for an extended period of time,” writes Infinity Ward.

In the end, it’s really up to you and your Clan how you want to play the game. You can focus on holding on to one or two nodes, recapturing them as soon as they are taken away from you, or you can simply move on to other nodes/game modes without worrying about previous ones you’ve captured. “There are in-game bonuses for a variety of strategies,” according to Infinity Ward.

Clan Wars is currently in its first week of operation, but there will be plenty of other opportunities to get in the game if you missed out. Be sure to stay tuned to the official Call of Duty App for details.

War Thunder Possibly Delayed On PlayStation 4 In North America, According To FAQ