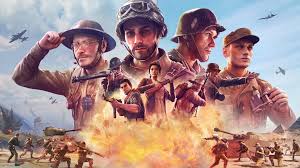 Prepare to immerse yourselves in anew and immersive real-time strategy experience, as Company of Heroes 3 has been announced by Sega and Relic Entertainment — propelling players back to World War 2 and embarking in new kinds of missions with infantry and weapons!

Here’s the reveal trailer from the developers themselves!

For an overview of when the latest Company of Heroes game takes place, here’s the official synopsis from the game’s official page!

In the summer of 1943, the Allies launch Operation Husky, starting a thrust to remove Italy from the war and weaken the Axis. The Allied forces, composed of American and Commonwealth troops (alongside international allies), engage in a long and arduous campaign that, despite the surrender of the Italian Army, will last well into 1945. As a player, will you recreate history or redefine it? Make the hard decisions that leaders made by choosing who, where and how to deploy companies. Lead your soldiers into battle and make them heroes.

While the game is still a ways off, a pre-alpha preview of the game will available to PC users at 11am PST! Visit the official website for more details!

Company of Heroes will be released for PC some time in late 2022, but be sure to check back here at MP1st as we’ll be sure to cover every detail of this next-gen RTS game!