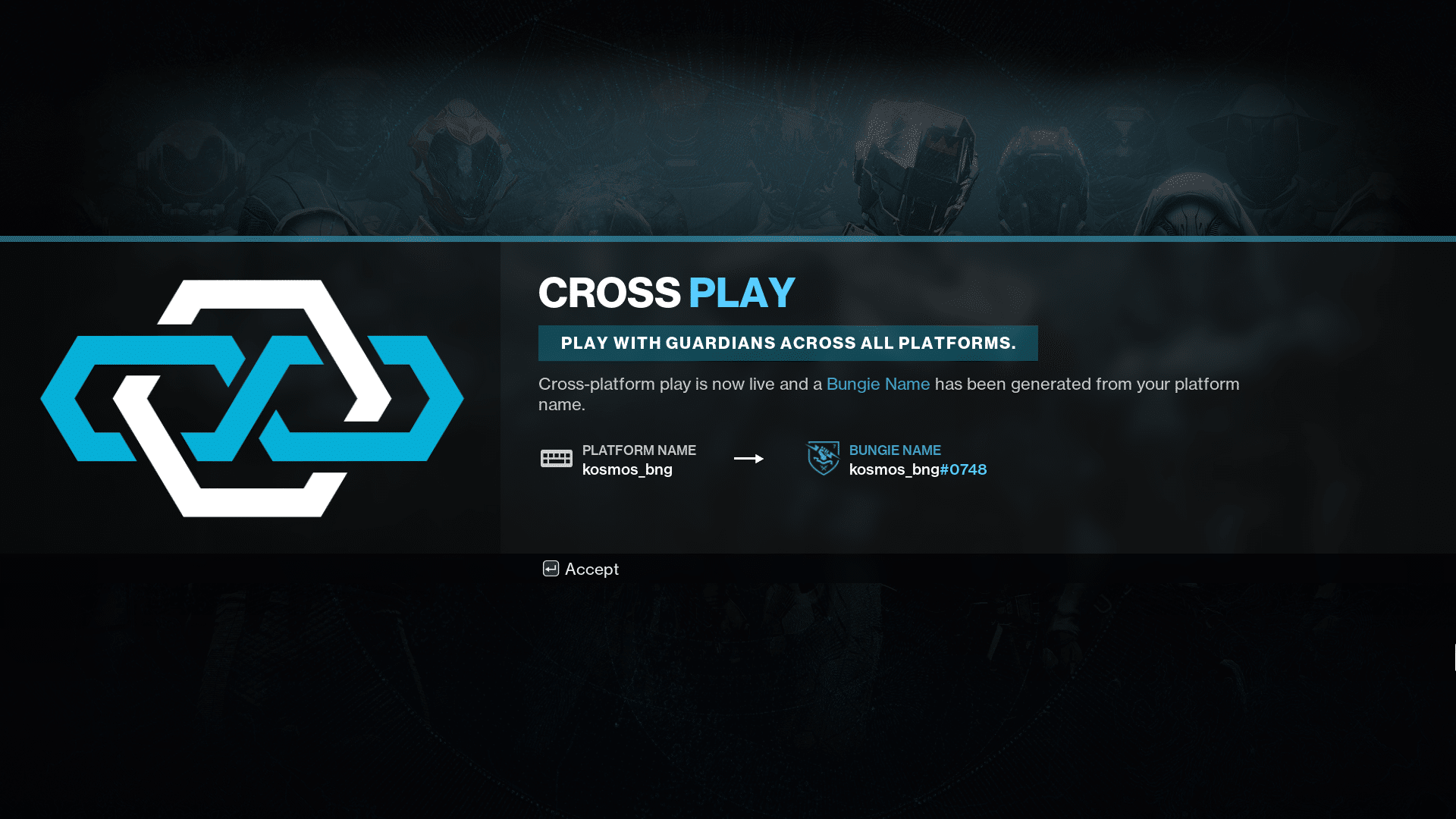 Bungie has finally outlined Destiny 2 crossplay, as it’s indeed coming in Season 15! Those who have been awaiting this feature, the wait won’t be long now! While there’s no release date on just when this feature will be released just yet, Bungie has released details on how to find in-game friends, how to find new fireteam buddies, and loads more.

Ready? Sink your teeth in to possibly the most requested feature of Destiny 2 hitting soon!

In a Cross Play world that also supports Cross Save, it quickly became clear to us that we had a Guardian identity crisis.

We didn’t want the name over your Guardian’s head to change based on where you logged into the game. We felt this fought against the fantasy of who you are in this new unified Destiny community. Even more concerning, we didn’t want the names of your friends and clan mates to change based on where they logged into the game. Having to keep a who’s-who cheat sheet of your friends’ names didn’t meet our effortless bar for Cross Play.

As such, we’re converting everyone’s name over to an identity that will remain consistent across all platforms you play from. We’re calling this your Bungie Name. While this will cause a one-time naming reshuffle, we feel this is better for everyone in the long run. Here’s how Bungie Names will work and look:

Here’s an example of a player tooltip in the Roster screen, surrounded by players from different platforms: 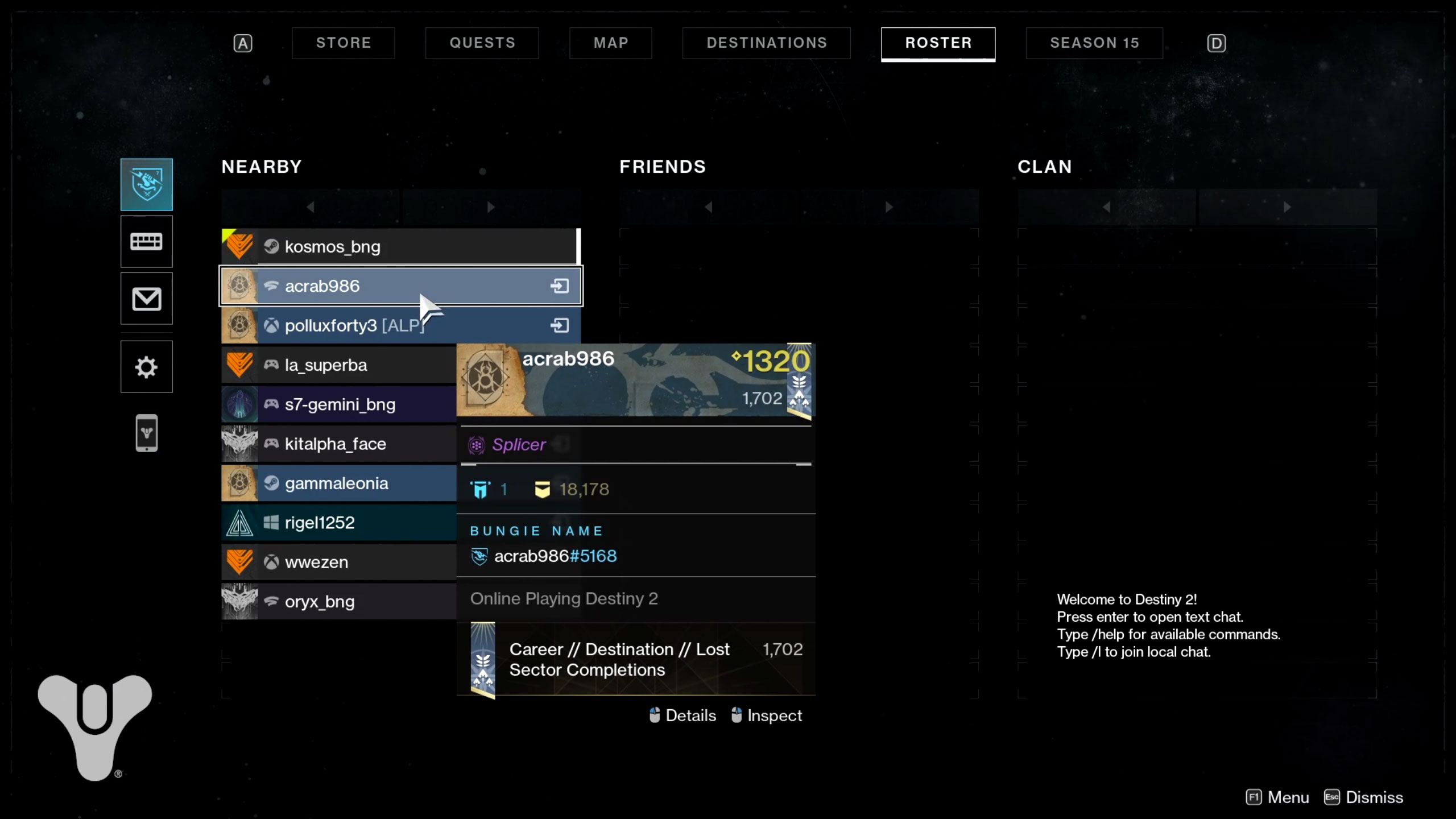 And an example of what players will look like in the Tower: 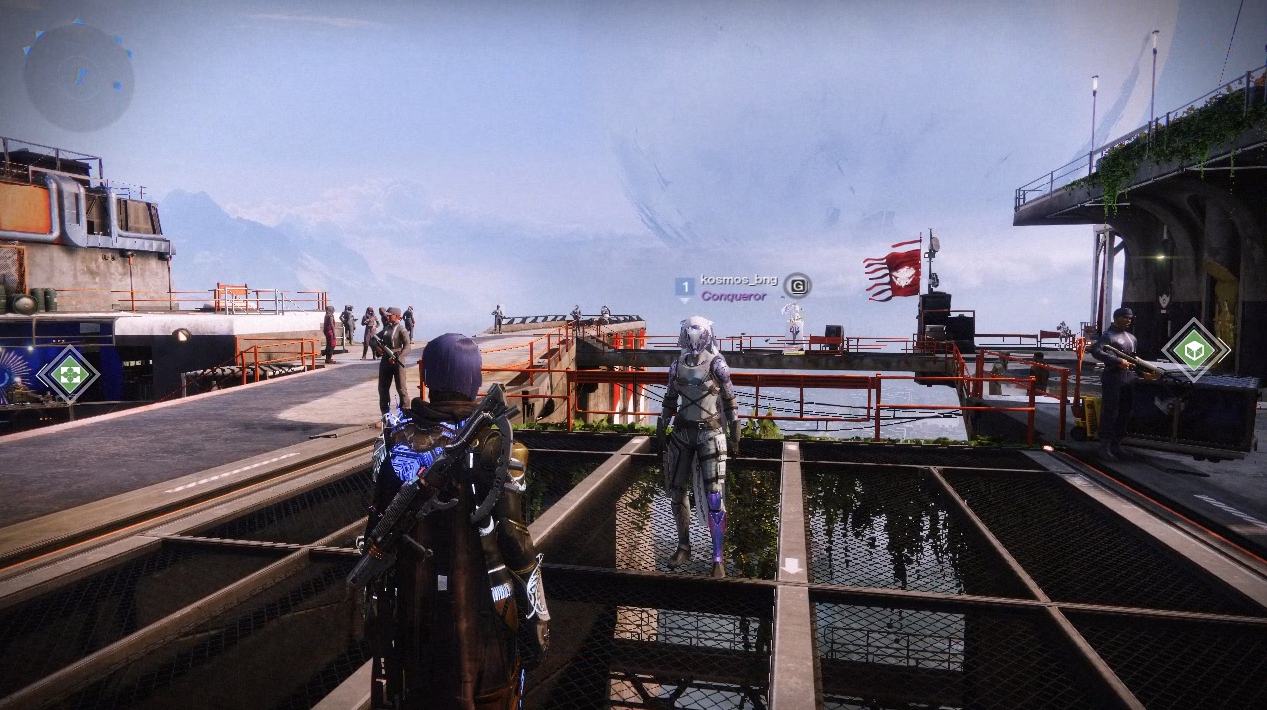 What’s in a Name?

As part of the creation of Bungie Names, we will be running all player names through a character filtration process and  an offensive term moderation process.

First, we will be stripping out all characters that we are unable to display in the game or that can’t be typed into the player search box via console virtual keyboards. This means some of the extended character sets we’ve supported for player names on Steam will no longer be able to be used. We will miss you, fellow Guardian [Hand Cannon][Sniper Rifle][Rocket Launcher], but we do want your console friends to be able to find you via player search.

It is possible that due to removing these characters, players will end up with empty names, or names that result in offensive terms. If your name ends up empty or includes a moderated term, you will find the quite unremarkable “Guardian[Random Number]” name over your character’s head. While we won’t have a name change feature at launch, we are working diligently to get you an early version of this feature this winter. We highly recommend you think carefully about what name you’d like to rock in Destiny 2 sooner rather than later, as we don’t want you to be stuck with a handle you’re not overly fond of when the name change feature goes live.

The One Where You Find Your Friends

Cross Play without an easy way to add new friends, well, doesn’t get it done. As such, there are three different ways to add your friends from all platforms to your Bungie Friends.

The Bungie.net friend finder will become available alongside Cross Play, and will be found at https://www.bungie.net/friends.
So, let’s talk about the in-game options…

Have Friends, Will Fireteam

In order to make fireteam invites work across all platforms, we’ve pulled all of the invite infrastructure into the game. When you get a fireteam invite you’ll see an in-game invite notification. To accept the invite, you’ll navigate to the Roster screen, then the invite section, and then interact with the invite to accept and join your fireteam. Notice that the Invite screen is where you can search for other Guardians, accept friend requests, and clan invites. 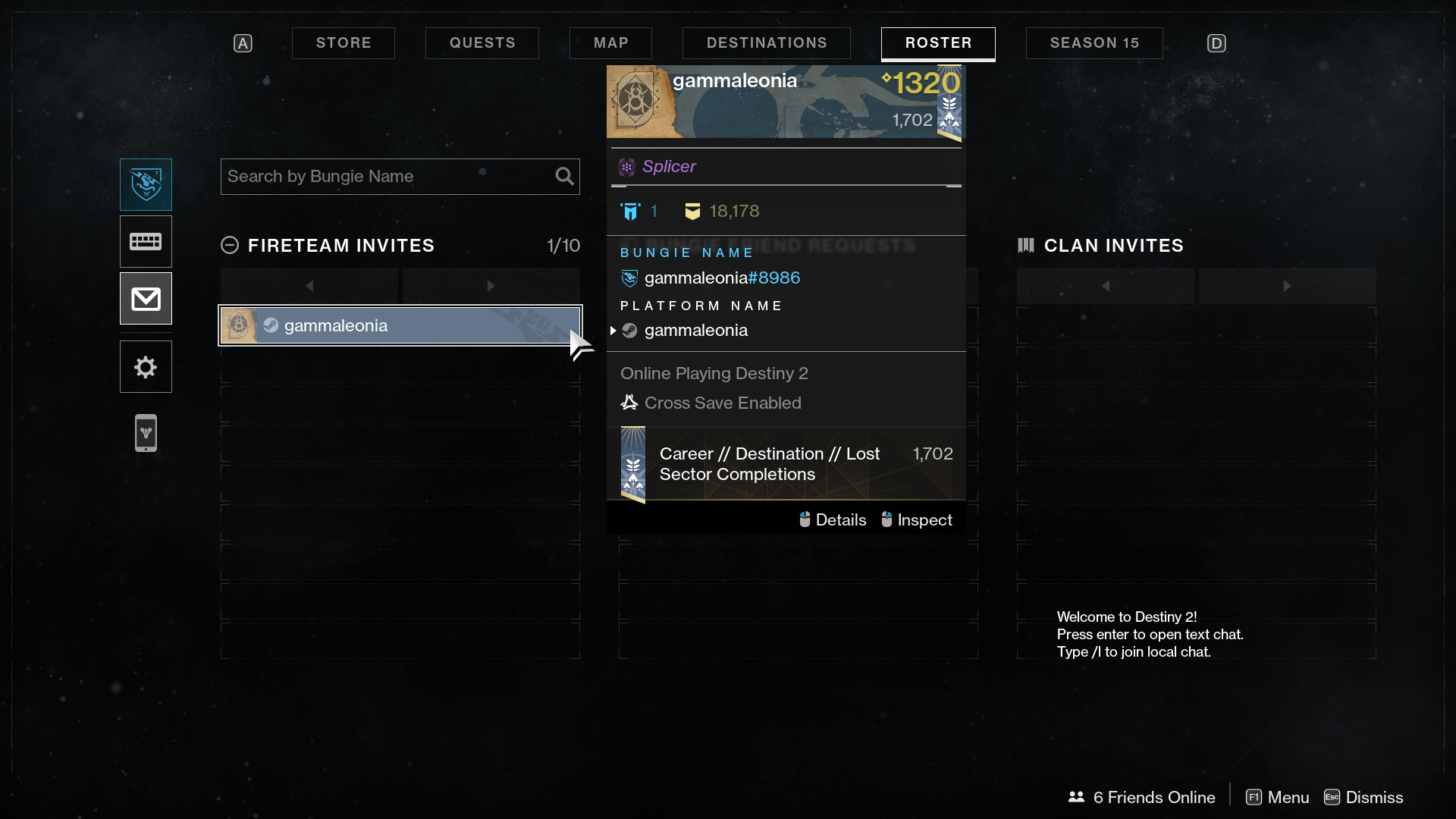 Teaming up with Potential New Friends

Destiny is a game filled with aspirational content. To help players find each other, our community has built a series of external group finding forums and tools. Including our own Fireteam Finder, which can now issue fireteam invites to all platforms! When building Cross Play we wanted to make sure that our new fireteam invite system wasn’t getting in the way to pulling together your fireteam. As such, the invite screen allows for players to search for each other and issue fireteam invites.

That said, there are members of our community who experience targeted harassment. To help players protect themselves, we’ve added a block system so that players can protect themselves. . We’ve also added additional privacy tools so that players can protect themselves from broad harassment. Most of the social privacy settings can be accessed from the Roster screen, where you will have control over the different kinds of invites you’re willing to see and consider. For the time being, your privacy setting for clan invites will still be controlled through your personal Bungie.net privacy settings, which can be found here: https://www.bungie.net/en/Profile/Settings?category=Privacy

In Cross Play we’re striving to create a global community of Guardians. At the same time, Cross Play enabled us to ask a ton of questions about input methods, and how we create a level playing field in competitive modes. While the following might not be the answer forever, it will be our approach for matchmaking in competitive modes (Crucible, Iron Banner, Trials, Gambit) at Cross Play launch:

For PvE modes, there will be one global matchmaking pool.

Chatting With Your Friends

When Cross Play releases, voice chat between platforms will not be enabled. We have run into some late-breaking issues with development and are currently working on making sure this experience is ready before shipping it live. We know this will create a less-than-ideal player experience out of the gate, and we even considered delaying Cross Play as a whole. Since we know that there is a lot of excitement and that the community will find ways to work around this in the interim, we decided to go ahead with the launch. We’re currently targeting a fix for cross-platform voice chat in an update targeted for shortly after Cross Play goes live.

We see text chat as a critical tool for player communication in our action MMO game. At Cross Play launch, text chat will still be available on Steam. From launch through The Witch Queen, we’ll add text chat support across the console platforms. We’ll start with displaying text, so that console players can at least see what their PC friends are talking about. And then we will add USB keyboard support, so that everyone can join in. Note: USB keyboards on consoles will only be for chat and will not be able to control your character.

Bungie adds that they are just beginning as improvements and more will be coming to Destiny 2 crossplay leading up to the next major expansion — The Witch Queen!

Here’s what’s planned for crossplay from release up to The Witch Queen:

As for what’s coming this week, Bungie has anounced that the Iron Banner is coming back for the last time this season, and for the first time this August!

Same as before, once the Iron Banner is live, we’ll be sure to let our readers know of the bounties and rewards!