If you’re one of the many Guardians who think that the ghost in Destiny 2 can get an improvement or two, you’re not alone. Well, one gamer actually made a Destiny 2 ghost 2.0 mock up of sorts (at least in terms of features), and it even managed to catch Bungie’s eye!

Reddit user TheSpaghetti posted what he calls Ghost 2.0 that attempts to solve the problem of Ghost perks, seasonal mod slots and more. 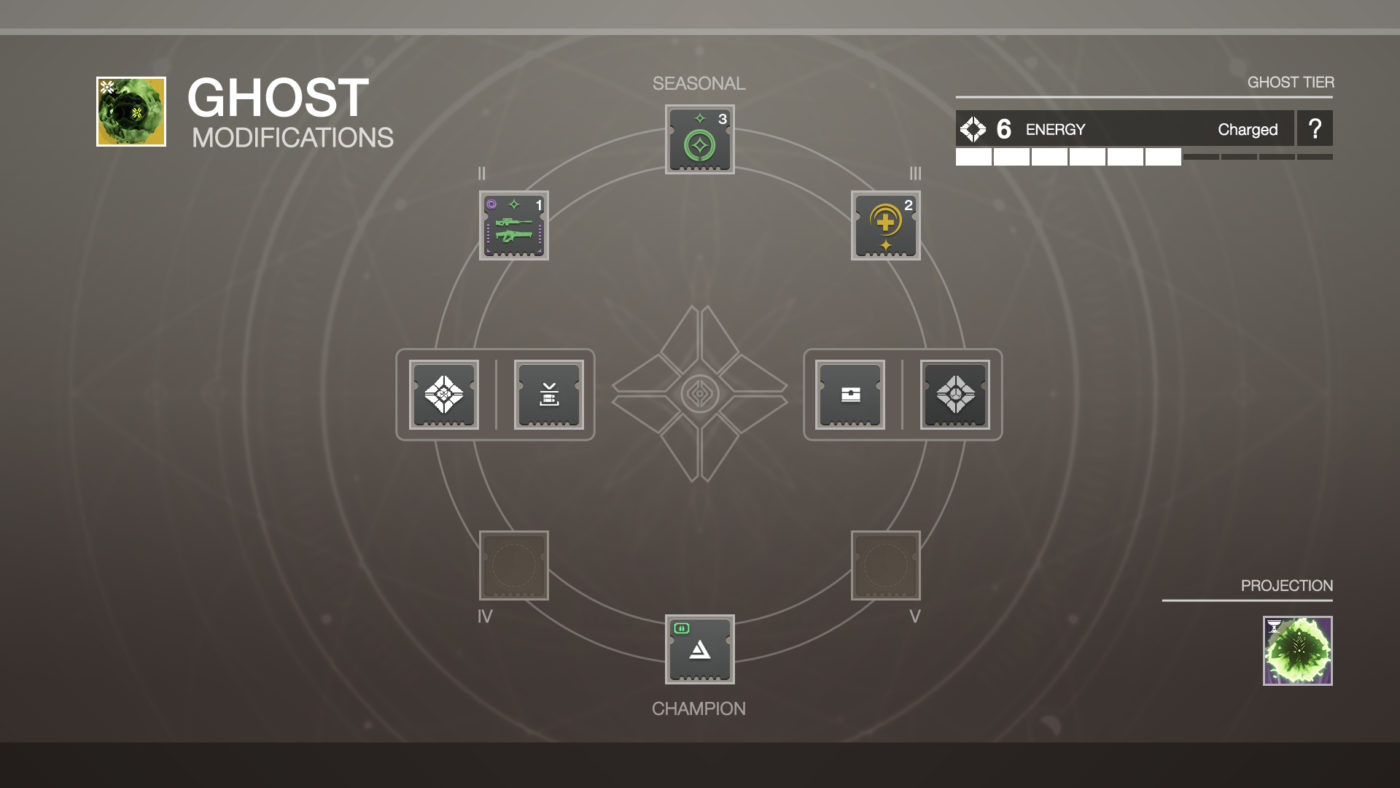 So some problems I wanted to try and fix with this is making ghost shells cosmetic, making seasonal mods easier to start to use, and the over-restriction of loadouts that the champion mods are causing.

Currently any shell without Guiding Light is useless. Most of the ghost shells you can buy or unlock are just instant dismantles if they can’t roll the right perks. With this, shells would work the same way as projections and would be swapped by left clicking on the ghost slot in the current inventory.

Right clicking would bring up this interface. Ghost perks would then become mods, dropping and unlocking to be slotted in the center row. The left two slots would be for exotic tier perks, the first right one is for common perks, and the last is for Guiding Light. Guiding Light can then be a perk that unlocks when a ghost is fully upgraded/other unlock conditions. This lets players use whatever shell they want and can expand on the mod system into ghosts.

Right now using the new seasonal mods are a huge hassle. Using them requires grinding out the new armor which invalidates the previous god rolls and using a exotic means you’re missing out on a mod slot. While I get the intention was giving a reason to grind out the new armor but acquiring new pieces with the stats + affinity you want could take a while. Which wouldn’t be a problem but with mods that will go away, it feels bad not being able to really effectively use them until the season is well on it’s way.

With this, the seasonal mods will be moved to the outer ring section of the interface with the ghost having it’s own energy. The ghost could level with the artifact or with the new activities, with the full energy and slots unlocking along the way. This would give the full five slots regardless of the loadout and get people using the seasonal mods earlier and allow players to spend the rest of the season trying out builds.

So one of the biggest complaints right now is how restrictive champion mods make the PvE endgame. It stops being about what is fun but rather what the game forces players to use. Here I also get the intention was to highlight under used weapon types but this makes the endgame less enjoyable.

The proposed idea here is that the bottom most slot will apply the various anti-champion effects across all weapons of an ammo type. So if you wanted your special weapon to be anti-barrier you’d pick the mod in the picture. All the mods would be pre-unlocked. What this achieves is allowing any weapon including exotics to be used in the endgame. But the restriction being you have one effect on one ammo type. This can then be combined with the seasonal weapon specific mods to highlight weapons and let people deal with multiple champion types if they choose. So players aren’t forced to use the highlighted weapon types but there is still incentive to.

Not in the image but there would be a slot for shaders, and the kill trackers/stat trackers could be another slot potentially.

Bungie Community Manager Chris “Cozmo” Shannon noticed the post as well, and mentioned that while he can’t make any promises, they are looking into improving Ghosts. More importantly though, he confirmed that he’ll be providing Bungie devs with the feedback.

Will we see a Ghost update? Who knows, but don’t expect it anytime soon. Speaking of updates, we’re going to get a new Destiny 2 patch this coming week according to Bungie, and will mostly be for fixes.