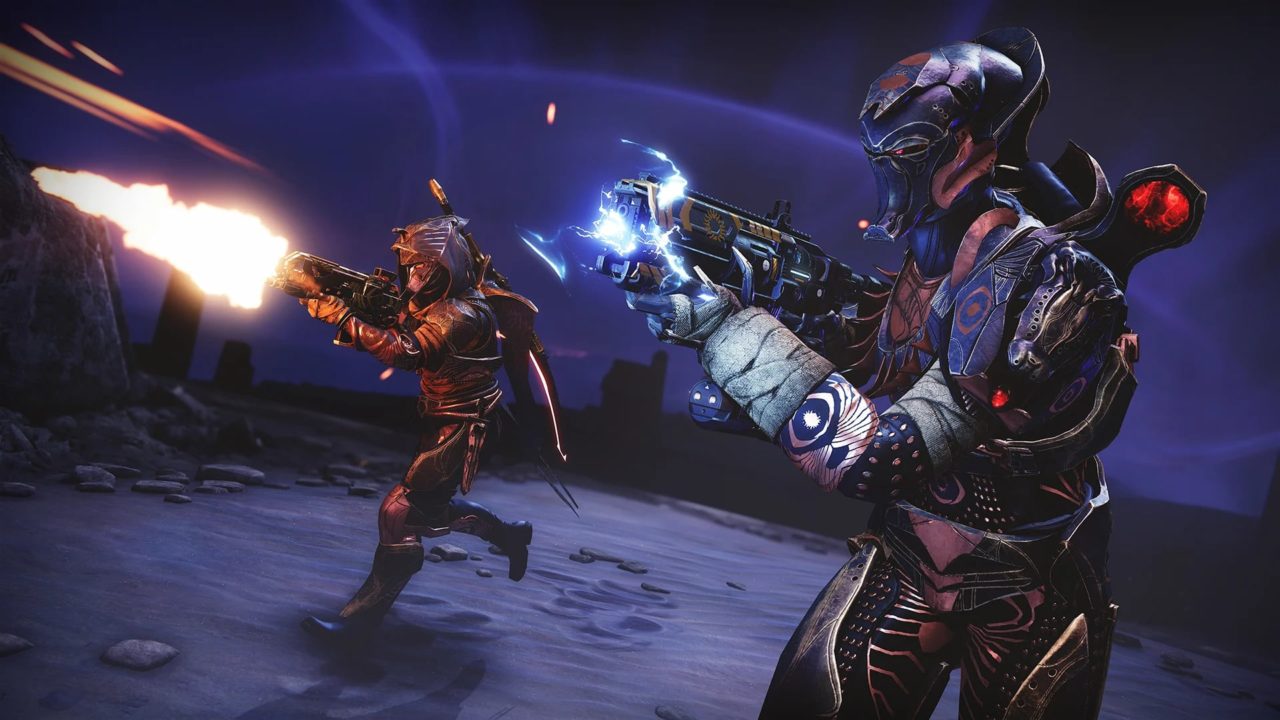 With so many changes coming to Destiny 2 in the next few years, as detailed by that massive leak that came out just a few days ago, it’s to be expected that the playerbase will get to enjoy some of those sooner rather than later. First up on the overhaul list for this new Season of the Lost is the game’s highest-tiered PvP content, as the Destiny 2 Trials of Osiris upcoming changes were revealed by Bungie in this week’s developer update.

Where is Destiny 2 Trials of Osiris This August 27?

With the changes coming soon, Bungie has stated that Trials of Osiris will return this September 10. You can read more on how Bungie is planning to schedule Trials of Osiris moving forward in the posting below.

With that out of the way, check out the complete news post on upcoming changes to Destiny 2 Trials of Osiris below:

As announced in the Destiny 2 Showcase, we have some changes planned for Trials of Osiris. Mode changes, matchmaking tuning, and more.
If you’re a Trials novice, here’s a quick breakdown on what to expect on September 10, 2021:

First and foremost, Trials will be taking a short hiatus at the beginning of Season 15. In our goals of maintaining a healthy population, we’d like to remove issues where players are torn between multiple PvP or endgame goals for a given weekend. So, we’re making the following changes for all our future Seasons starting in Season 15:
Trials of Osiris will return on September 10, 2021
Now, let’s dig into changes to the overall mode and its reward structure.

We’re making some changes to provide broad access to more players. While Trials is a highly competitive PvP environment, the bar to enter feels far too high. 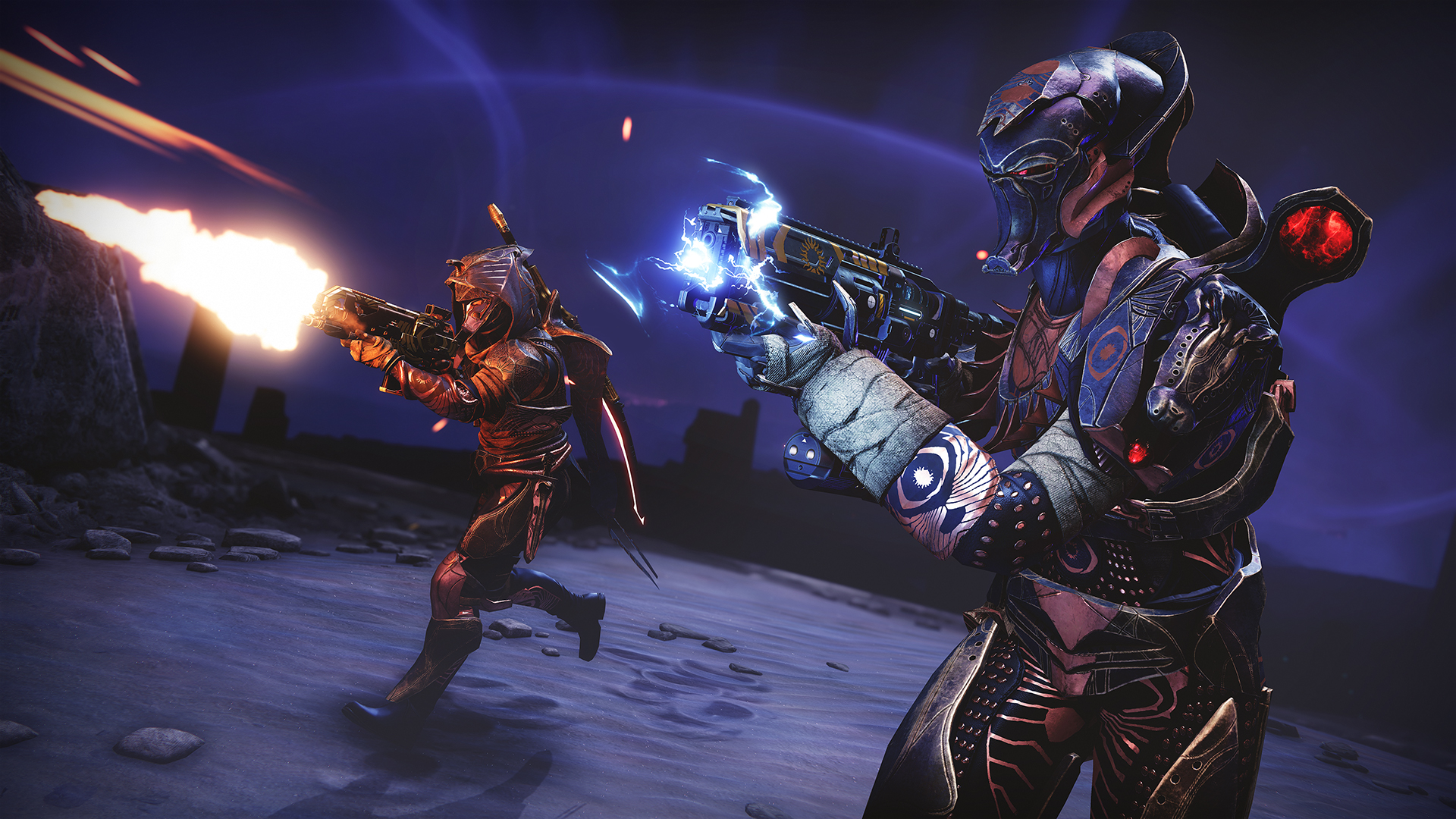 Over the last few Seasons, we’ve been taking a look through player feedback and internal playtest notes to target specific pain points. The following changes should help reduce stalling gameplay and snowballing behavior that makes it harder to catch up once you are behind. 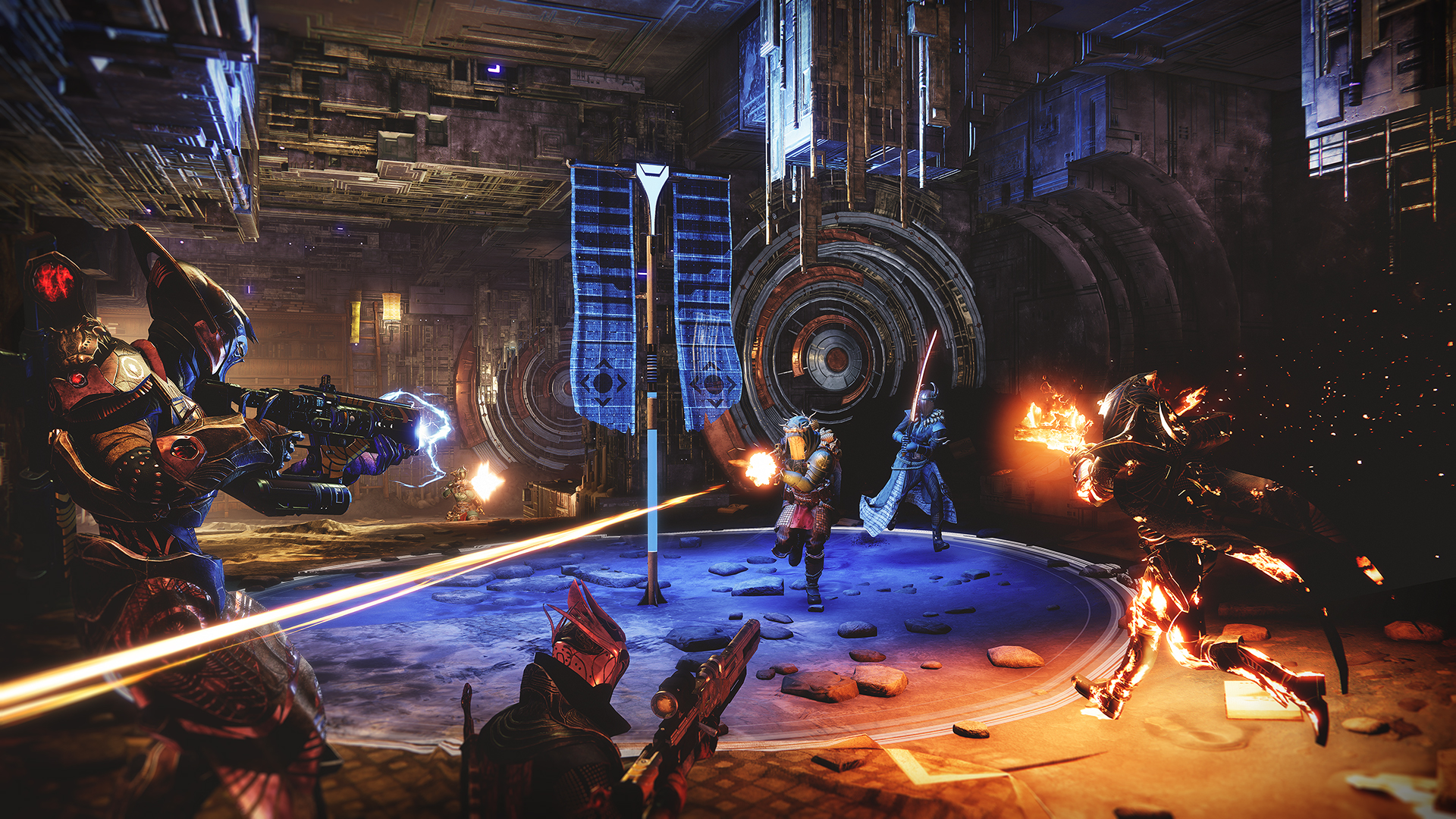 Once these changes are live, we’ll be watching the conversation to see what changes should be prioritized next.

As mentioned above, we’d like to give players more reason to play past three-win rewards. As such, we are opening up more rewards to more players, more often. Saint-14 will be receiving a full Reputation overhaul and be gaining the ability to focus Trials engrams to specific rewards. Adept weapons will continue to require a full Flawless passage to be earned. 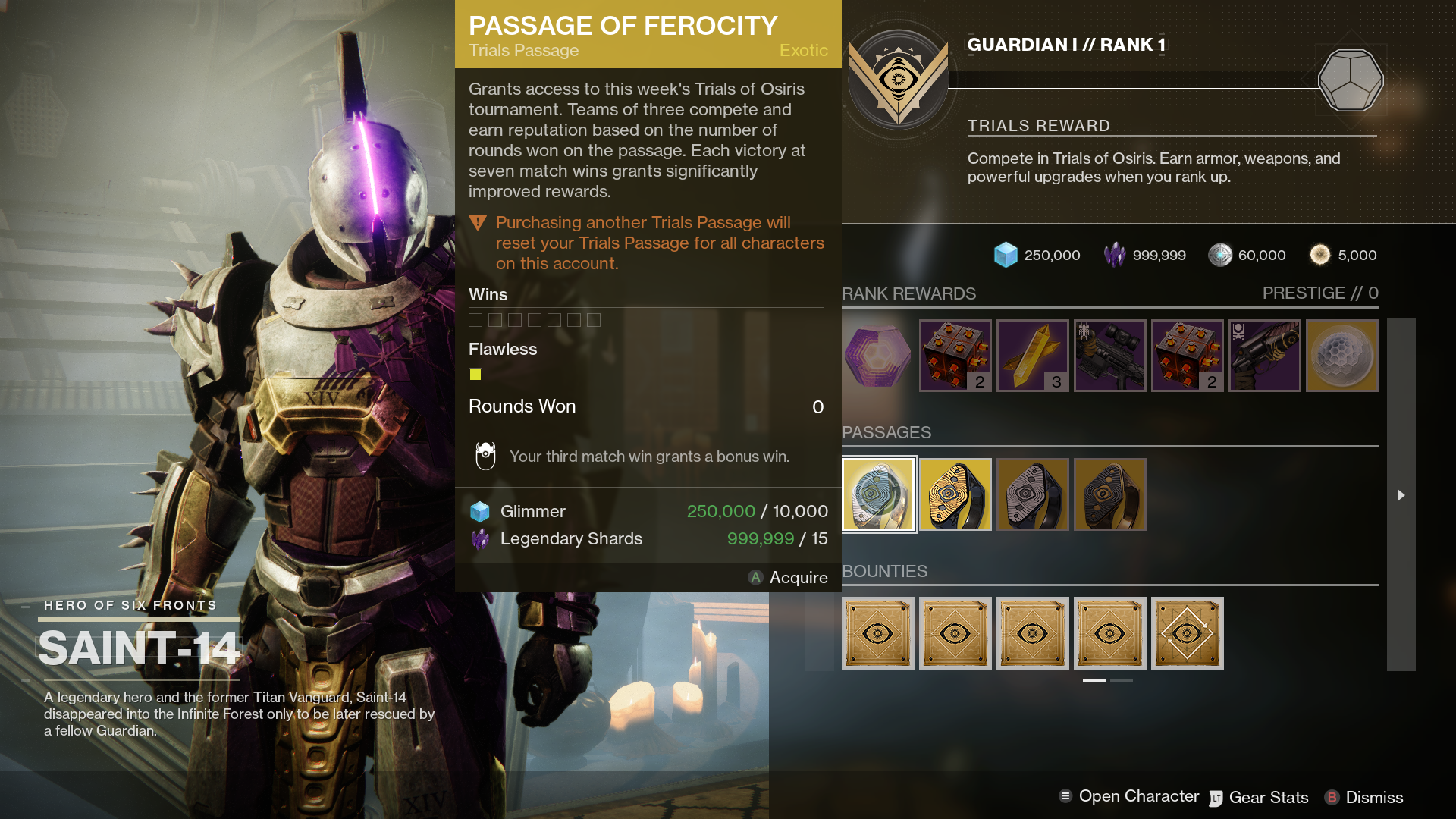 One of the most restrictive things about the prior Trials system was the emphasis on winning, and winning often, to get any rewards. While winning matches will still pave the road to the Lighthouse, we’re making some changes to let players enter the activity and earn rewards without having to reset their Passages frequently. 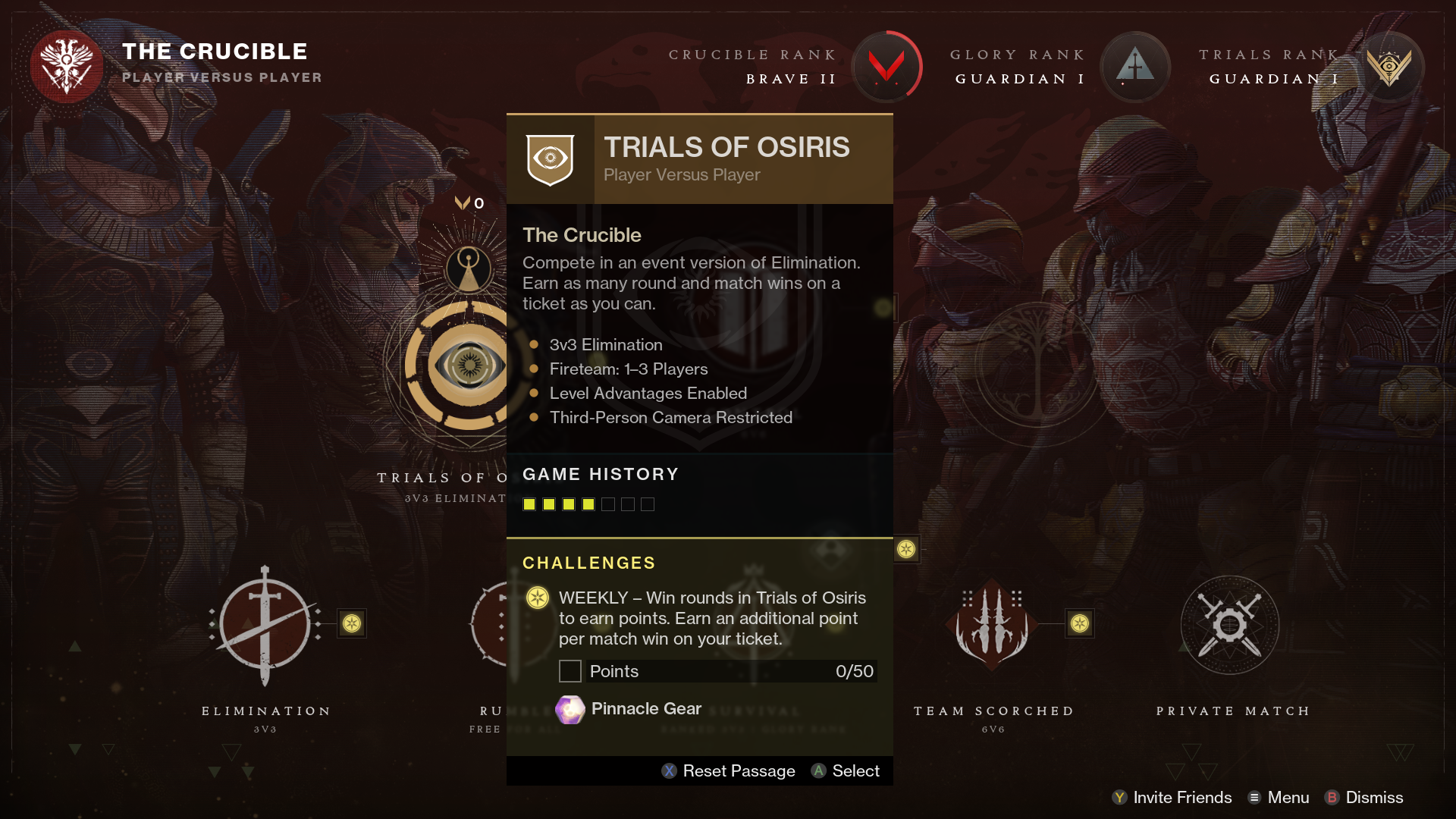 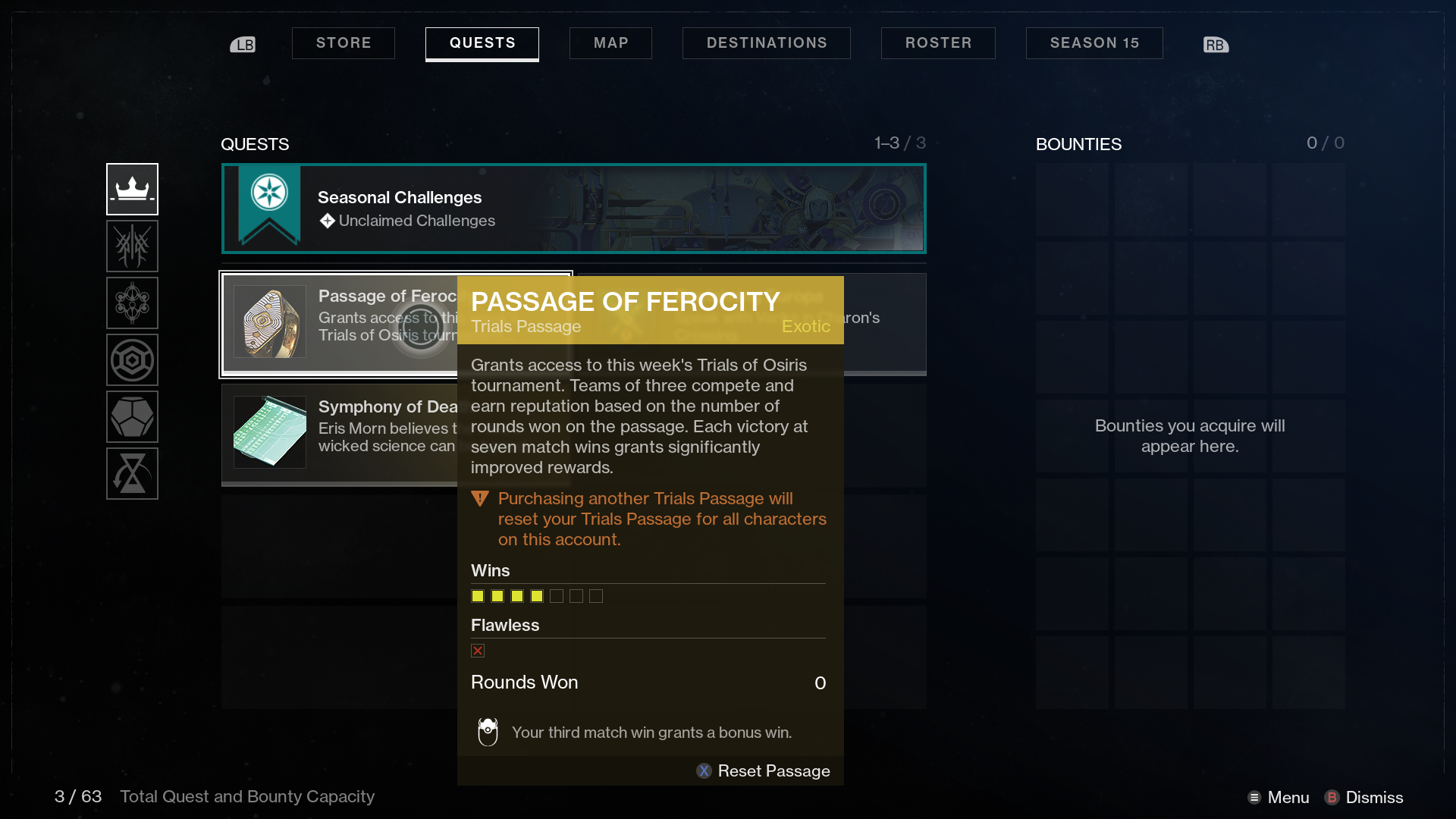 Each week, there are two pinnacle challenges for Trials:

Bonus progress based on the number of wins on your card.

As mentioned above, we’ll be overhauling Trials engrams to give players more direct ways to earn Trials rewards. 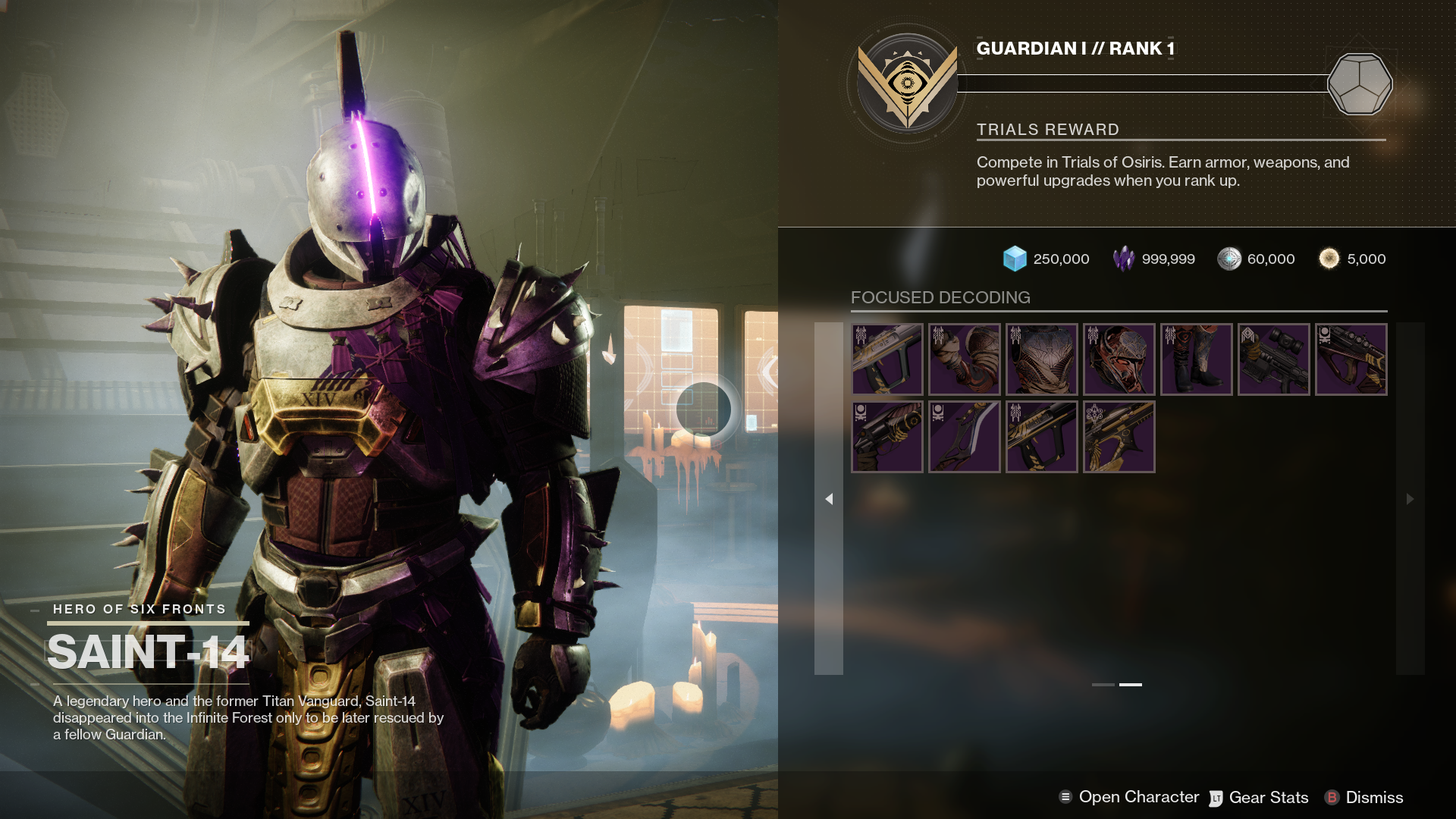 We believe that card-based matching is very valuable and can add some significant drama at the right time, but it is best when all players participating have the same end goal, or have similar performance characteristics. Too often, “Flawless-or-Bust” players get mixed in with players that have different goals and skillset and that misalignment can cause problems!

While we’re excited for all of these changes, we’re also looking towards the future. What other improvements could be made down the road to benefit the playlist? We’d like to give you all an opportunity to try out some things we’re thinking on. For veteran Crucible players out there, you may recognize the name. It is time for the re-introduction of Labs!
Over the course of Season 15, we will be running a number of Trials of Osiris Labs weekends, where we will test out targeted changes and collect analytics and feedback from you! They will generally take over the entire mode for the weekend, so we can get as many players in as possible.

We have three Labs planned for Season 15:

We don’t have a firm date for each of the above Labs weekends, but before they run, we’ll let you know in a future TWAB, on our various social channels, and in the Director. Since we know many of you are eager to dip your toes in to a solo-queue Trials experience, we’ll leave you with one small hint: What month comes after September?
As always, we reserve the right to adjust scheduling as needed, and will be listening closely to your feedback!

In case you missed this bit, Bungie has confirmed that Trials of Osiris will now require the annual expansion to play, which means those who don’t have it, can’t partake in the PvP festivities every week once it relaunches later in September. We’ve outlined that part again in case you didn’t see it:

That’s a bummer, but Bungie might be doing this to prevent abuse of the mode.

Once Trials of Osiris is back, we’ll be sure to let our readers know.