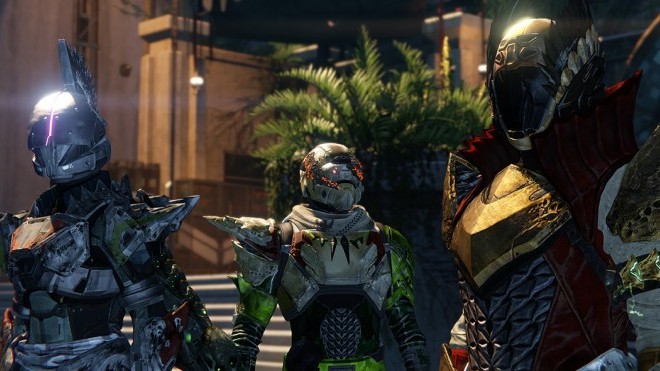 As the launch of Destiny Update 1.1.2 approaches, scheduled to hit all platforms before the end of this month, developer Bungie is detailing a few more of the upgrades the patch will introduce to their shared-world shooter in due time.

Two elements that were touched on in the studio’s latest Weekly Update were ammo drops in player vs. player gameplay and improvements to the way you manage your Guardian’s arsenal.

“A common thread has been the uptime, effectiveness, and usage of Special and Heavy weapons,” said Crucible Designer Kevin Yanes. “At the highest level, we had a few goals in mind [with update 1.1.2].”

He added that the designers believe that “making ammo more scarce and important will provide players with more choices and more memorable encounters in Crucible.”

“Special Ammo will spawn less frequently, it will take longer to pick up, there will be less crates located on the map, and the bricks you find will provide you with less ammo.”

With the new change, opening a crate without waiting for teammates will deny them of that special ammo. Yanes explained that, to prevent this, Bungie “raised the drop radius for teammates by a considerable amount.”

“Raising the drop radius helped players understand the importance of pulling a crate as soon as they could, while ensuring that nearby teammates would still benefit from the drop. We’ve already seen some great plays come from last second pulls to deny enemies and supply allies.”

Changes are also being made to the way Heavy Ammo spawns — and now despawns — during a match.

“The main thing we wanted to prevent in terms of Heavy Ammo was players trying to buffer their supply by sitting within range of a brick without picking it up,” Yanes said. “This hurts your ability to anticipate when heavy ammo would be in play during a match. By introducing despawn conditions, we’re ensuring that players will have to acquire ammo when it becomes available, or risk losing it all together.

“We think the transition back to regular gameplay is super important because it gives the team on the losing end of Heavy Ammo distribution a chance to rally back.

“Extending the inbound timer by five seconds allowed more players to get to the ammo. We’re also adding some new visual prompts, like timers and pre-spawn effects, to forecast the arrival of all ammo crates. More advance notice reduces how often players open the crate without their teammates having a chance to get to it.”

If you happen to be a Destiny player with children or pets that like to crawl over things, including controllers, you’ll appreciate the new Item Lock feature that Bungie is implementing with Update 1.1.2. The new tweak will allow Guardians to lock any pieces of gear in order to prevent them from being accidentally dismantled. You’ll now see a little lock or unlock symbol next to your items, as seen below:

“We all agreed that it’s important to give players every opportunity to show off the cool gear they’ve earned,” said UI Engineer Daniel Hanson. So, in Update 1.1.2, Guardians will now have the option to wear their helmet while running tasks, visiting vendors, or socializing in the Tower.

“It turned out to be a fairly quick UI task to turn helmets on in the Tower,” Hanson added. “Our engineers banged out the code for it in short order. All we had to do was figure out where to put the menu option. A number of locations in the UI were discussed. Character screen? Details screen? We decided that the Settings menu was the most obvious and easiest place to control this new feature.”

As Bungie Community Manager David “DeeJ” Dague put it, “There’s nothing left to say about the next Destiny update, aside from the fact that you’ll download it soon.”

Detailed patch notes will be available shortly, so keep your eyes locked on MP1st for updates!