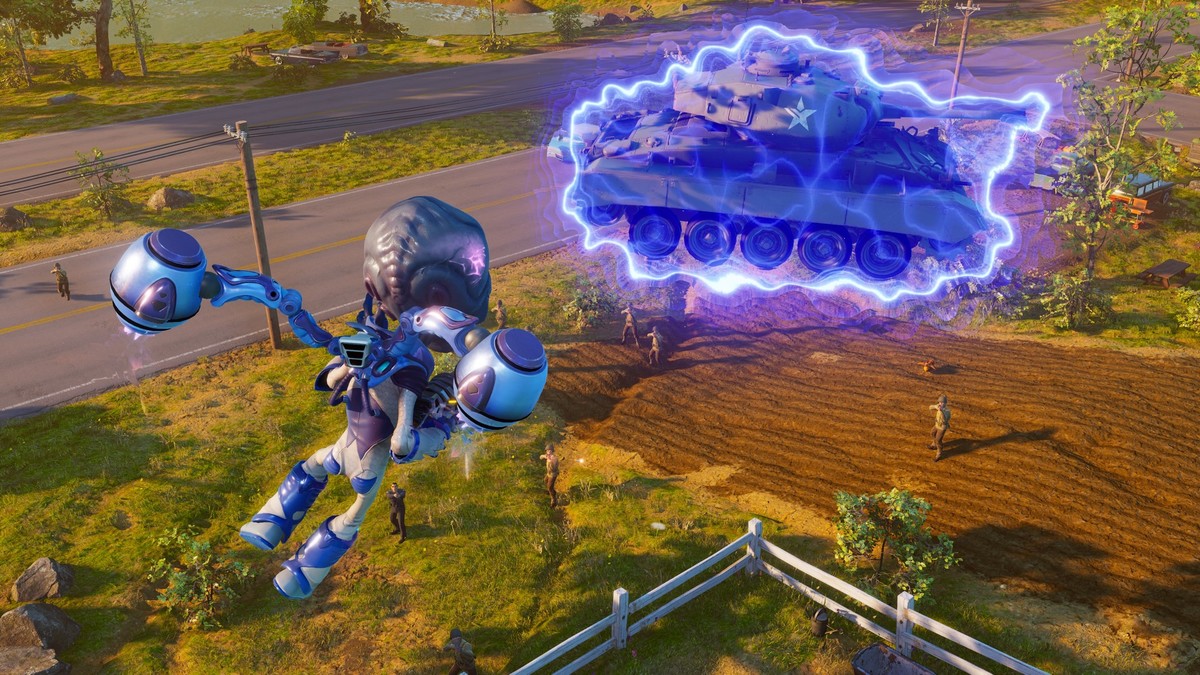 Kind of strange knowing that it’s been a little over 15 years since the original Destroy All Humans! launched on the PS2. While a distant memory, one thing I did like about the original release was the amount of mindless fun it had to offer. Of course, I was far younger than and looking back it, it certainly isn’t a title that aged well in terms of visuals and gameplay. So it came much of a surprise when publishers THQ and developers Black Forest Games announced last year (2019) that they would be remaking the original, bringing it up to modernized standards. Thinking back to the days when games were more fun, I couldn’t help but feel excited by this news, and with Destroy All Humans! (2020) now finally released, it’s time to crack this B-movie style game once more.  Read on for our Destroy All Humans review.

A Little Green Man With a Big Attitude

As the title suggests, Destroy All Humans! is a game about, well, destroying all humans. You play as a little gray alien named Crypto 137, who after discovering his clone, 136 was killed in action by the military forces of Earth, decides to take revenge in the most diabolical ways imaginable. This includes using his heavy arsenal of weapons, such as mind control, telekinesis, Disintegrator Ray Gun, and even a weapon known as the Anal Probe. Yeah, you read right, a literal weapon based on theories of what aliens do to human beings. It’s a very campy game, paying homage to many B-flicks films from the 20th-century era.

Crypto 137 himself, although extremely aggressive, is a pretty snappy character, though not all jokes hit home. They are pretty crude at some point, but that’s part of the charm of the original as while it may appear as a child’s game, it really isn’t once you really pay attention to some of the jokes 137 makes. Many well ahead of their time, with some still being as offensive even for today. Outside of 137, we also have the overlord of this alien race, played by nonother than Invader’s Zim’s own voice actor, Richard Horvitz. While the dialogue and voices are direct rips from the 2005 version, hearing Richard’s character in the same voice as Invader Zim is still to this day one of the best things about Destroy All Humans. It’s over-the-top, and still, an absolute delight despite the audio being 15-years old.  Again, the story may not hit for some as jokes come from a riskier timeframe, though that’s one of the reasons why many of us loved the original since it didn’t shy from having crude humor. If you don’t take the story seriously, then you’ll end up having a far better time.

Out With the Old, In With the “New”

While the story and audio remain the same as the original 2005 version, the remake adds a whole new fresh coat of paint that really shines. For being a budget-tier title ($40), Destroy All Humans! 2020 looks surprisingly well. While it maintains the same aesthetic feeling of the 1950s with its vibrant color tonnage, some of the character models, more so the Overlord and Crypto 137 look absolutely fantastic, especially during some Pixar quality cutscenes between the two. There are some rough patches with blurry textures and clear downgrades between the in-game and cinematic models, but for a remake, it stays true to the original vision, just in a prettier fashion.

Gameplay, however, is the same for the most part, just with a more modernized feeling. Its a lot smoother, with the frame-rate holding well even during 137’s most rampage filled moments. There is also multitasking this time around. In the original, you could only use one ability at a time, whereas in the remake you can now you can move objects while also shooting and doing a number of other things all at the same time. It’s a great change as it adds more variety in the gameplay, along with removing the stiffness that the original had. Weapons, although the same, now feature more upgrades, making them more unique and deadlier than ever before. I couldn’t help but chuckle at how some of the characters reacted, and even at times felt a bit bad for subduing them to such tortures.

The only real thing I found annoying was the stealth missions. Too many wrong things could occur during them. The checkpoint system is a bit wonky as well, as one moment it’s saving nearly every objective, and then in the next, you find yourself redoing entire segments because of no checkpoints.

For the most, the remake features nearly all the original missions with the inclusion of a new one that slips perfectly into the narrative. It would have been nice to see more of these to give more uniqueness to the remake but by no means does that make it less enjoyable. In fact, while the missions are the same, there are now bonus objectives for each of them, giving players a great deal of replayability. Some are challenging while others are simple, but I can’t say that I didn’t enjoy the extra challenge they had to offer. Some of them even made me play the game in a different style as I hadn’t thought about using certain environmental pieces as weapons.

Destroy All Humans! may not be a triple AAA killer, but it’s a great title that reminds of a time in gaming where developers took big risks. Some may view it as a game that never outgrew its time, but I’ve never been one to view games as serious if they clearly aren’t meant to be taken as such. Destroy All Humans! 2020 is a wonderful remake, one that will satisfy fans of the niche series. I highly recommend anyone wanting interested, as it will give you countless hours of mindless fun.