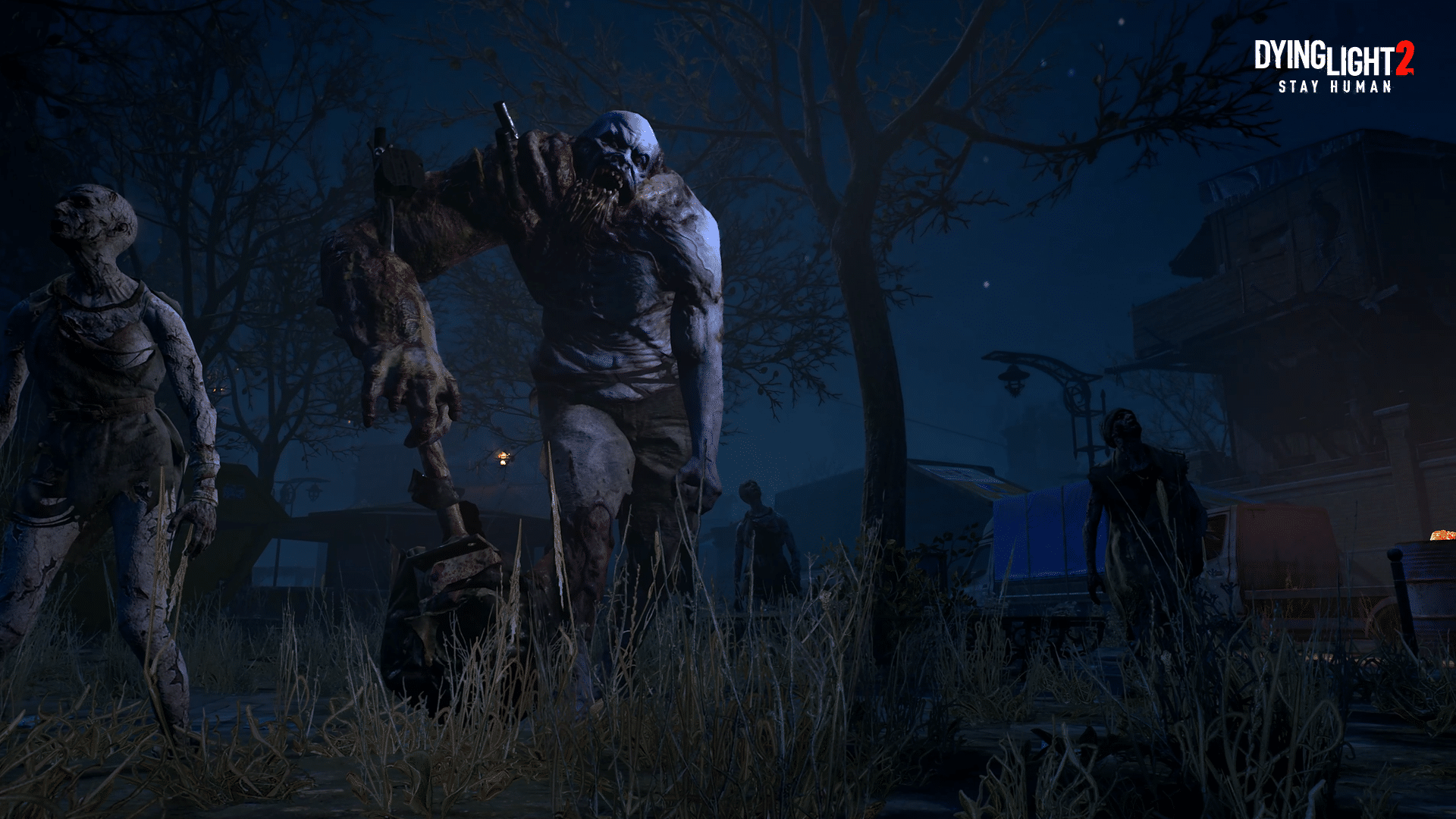 To coincide with the release of the new Dying Light 2 Monster trailer, Techland has pushed out a new interactive website, allowing users to find out which monster they would turn into if they got infected.

Down below, you’ll find a full list that we compiled of all the monsters that you can become from the questionnaire, along with a short description describing each of them. 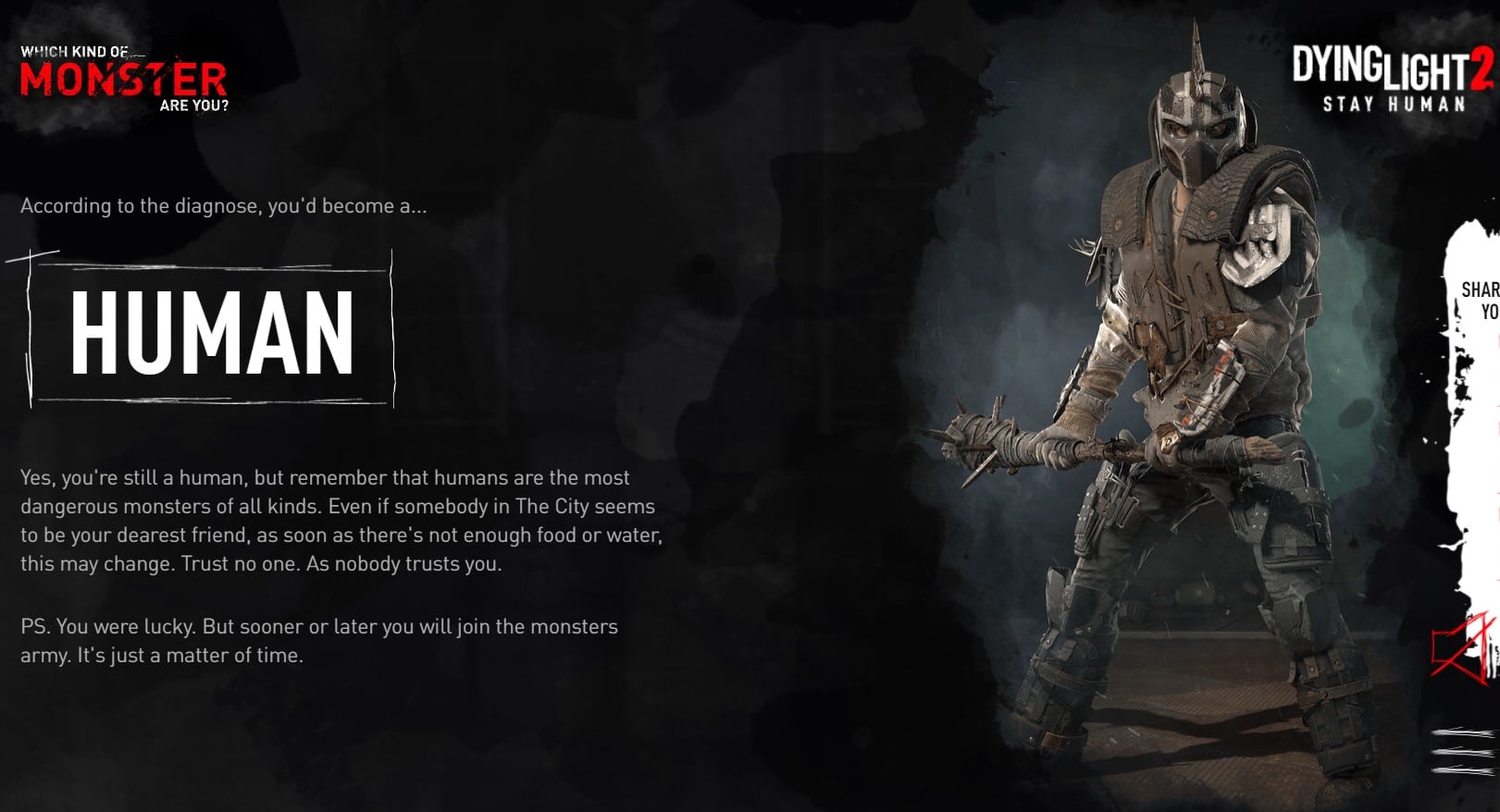 Yes, you’re still a human, but remember that humans are the most dangerous monsters of all kinds. Even if somebody in The City seems to be your dearest friend, as soon as there’s not enough food or water, this may change. Trust no one. As nobody trusts you.

PS. You were lucky. But sooner or later you will join the monsters army. It’s just a matter of time. 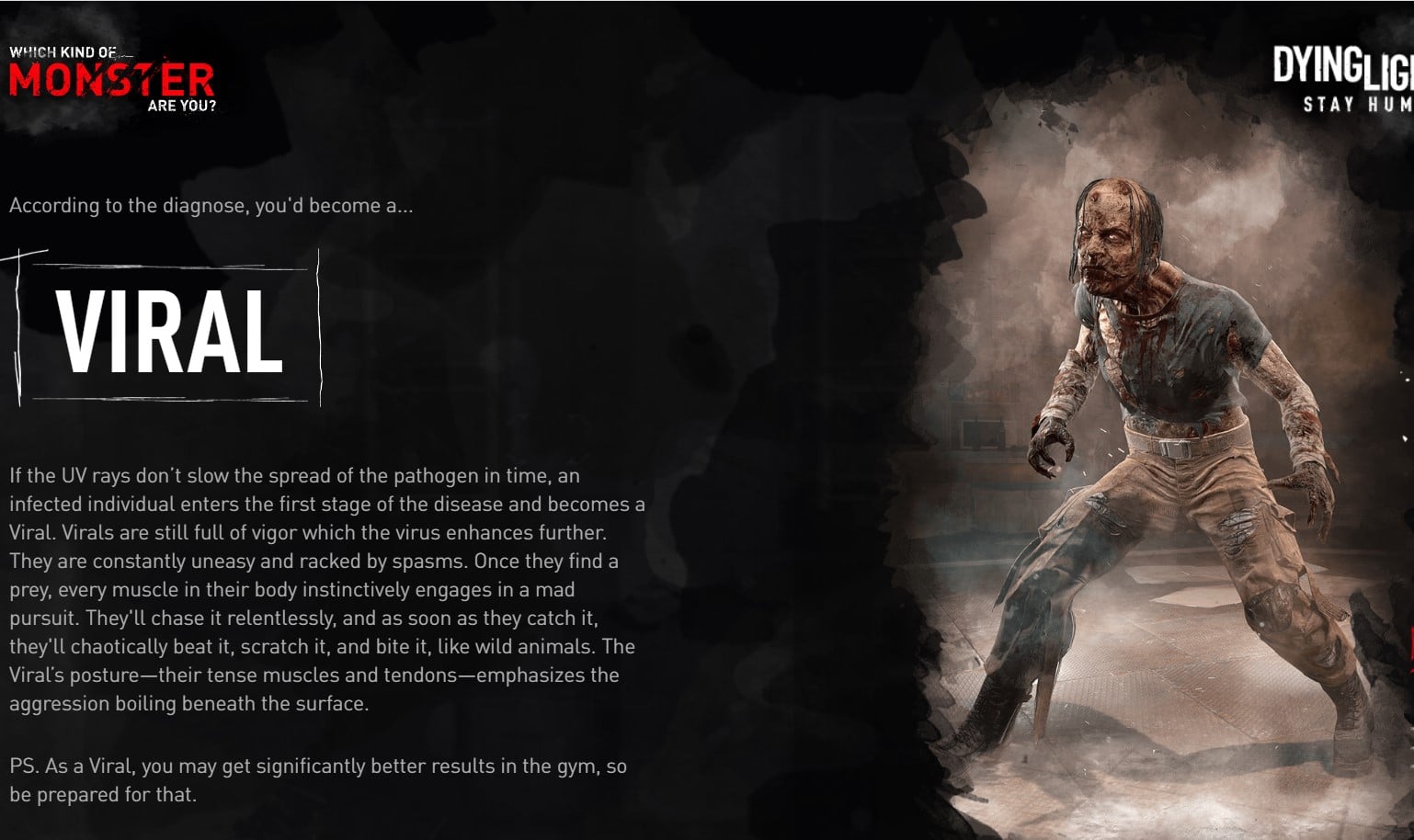 If the UV rays don’t slow the spread of the pathogen in time, an infected individual enters the first stage of the disease and becomes a Viral. Virals are still full of vigor which the virus enhances further. They are constantly uneasy and racked by spasms. Once they find a prey, every muscle in their body instinctively engages in a mad pursuit. They’ll chase it relentlessly, and as soon as they catch it, they’ll chaotically beat it, scratch it, and bite it, like wild animals. The Viral’s posture—their tense muscles and tendons—emphasizes the aggression boiling beneath the surface.

PS. As a Viral, you may get significantly better results in the gym, so be prepared for that. 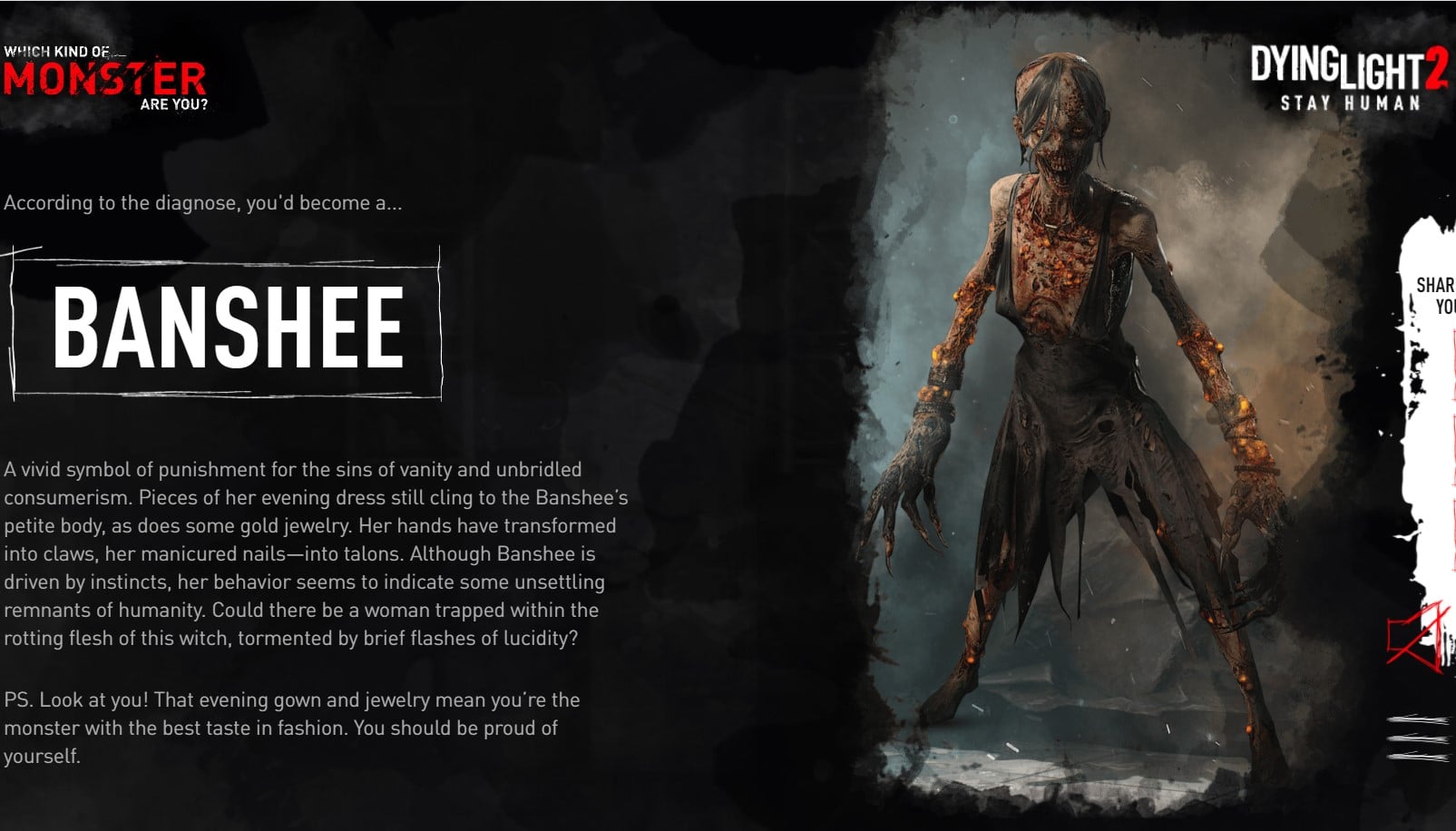 A vivid symbol of punishment for the sins of vanity and unbridled consumerism. Pieces of her evening dress still cling to the Banshee’s petite body, as does some gold jewelry. Her hands have transformed into claws, her manicured nails—into talons. Although Banshee is driven by instincts, her behavior seems to indicate some unsettling remnants of humanity. Could there be a woman trapped within the rotting flesh of this witch, tormented by brief flashes of lucidity?

PS. Look at you! That evening gown and jewelry mean you’re the monster with the best taste in fashion. You should be proud of yourself. 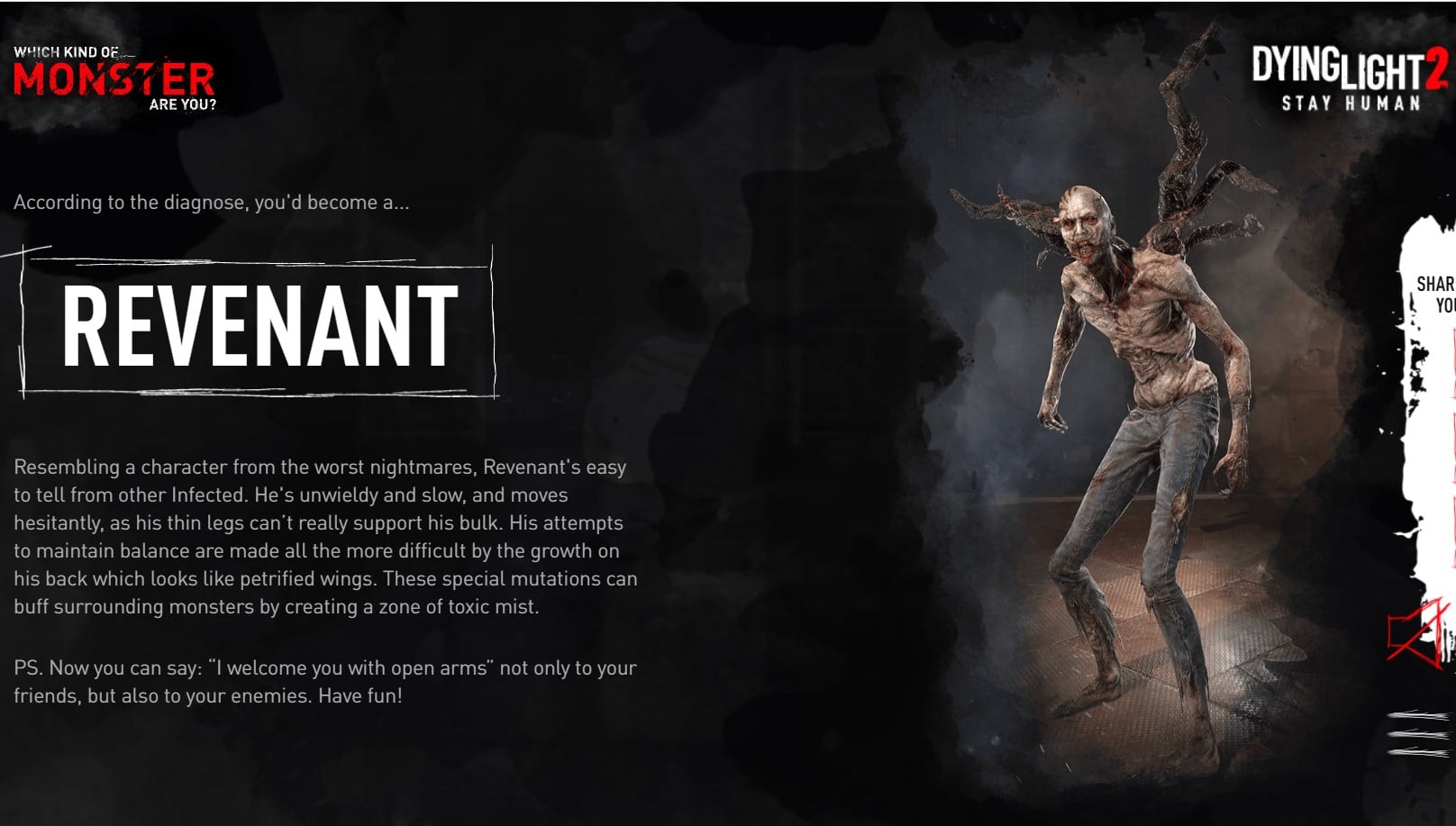 Resembling a character from the worst nightmares, Revenant’s easy to tell from other Infected. He’s unwieldy and slow, and moves hesitantly, as his thin legs can’t really support his bulk. His attempts to maintain balance are made all the more difficult by the growth on his back which looks like petrified wings. These special mutations can buff surrounding monsters by creating a zone of toxic mist.

PS. Now you can say: “I welcome you with open arms” not only to your friends, but also to your enemies. Have fun! 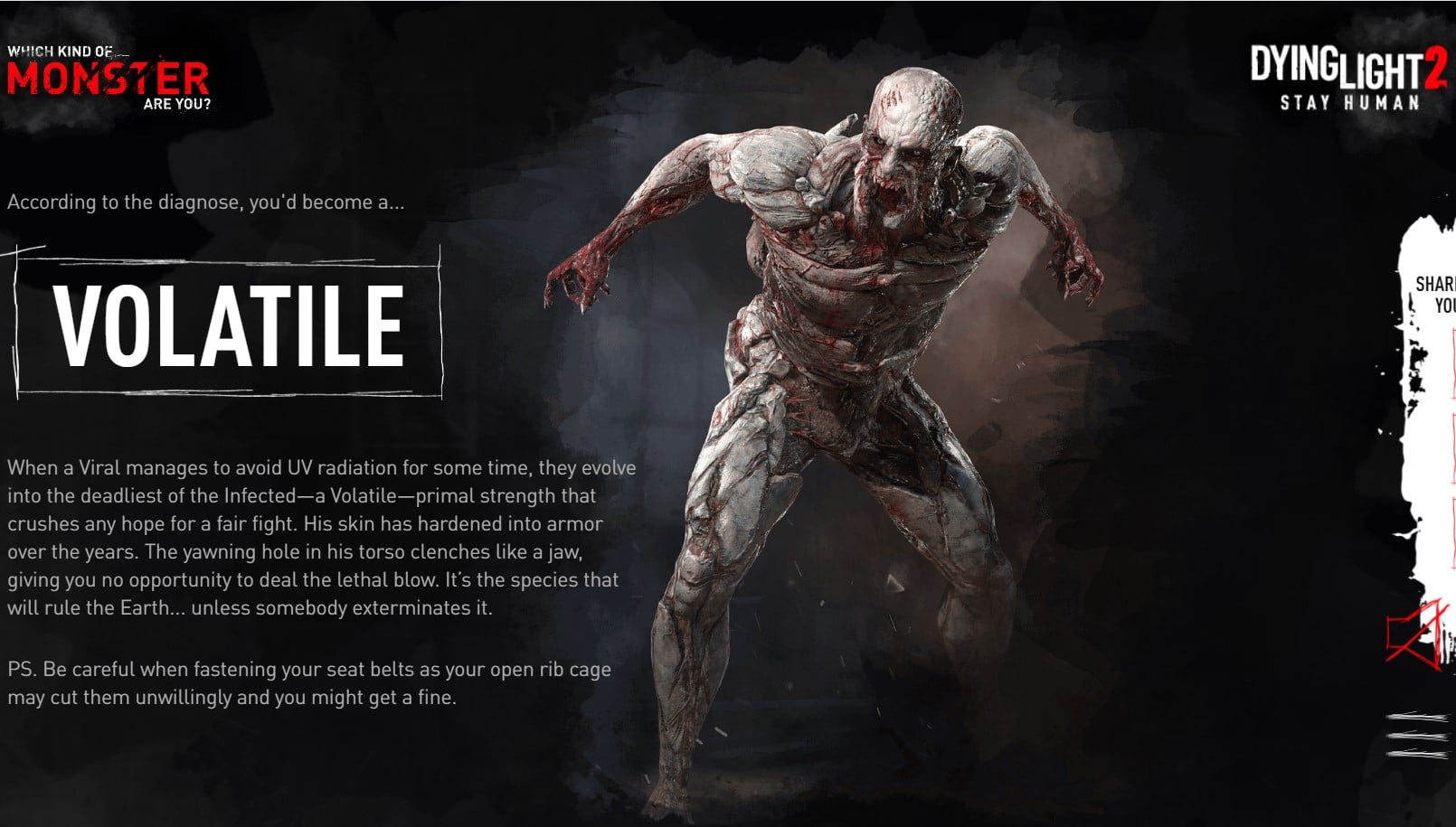 When a Viral manages to avoid UV radiation for some time, they evolve into the deadliest of the Infected—a Volatile—primal strength that crushes any hope for a fair fight. His skin has hardened into armor over the years. The yawning hole in his torso clenches like a jaw, giving you no opportunity to deal the lethal blow. It’s the species that will rule the Earth… unless somebody exterminates it.

PS. Be careful when fastening your seat belts as your open rib cage may cut them unwillingly and you might get a fine. 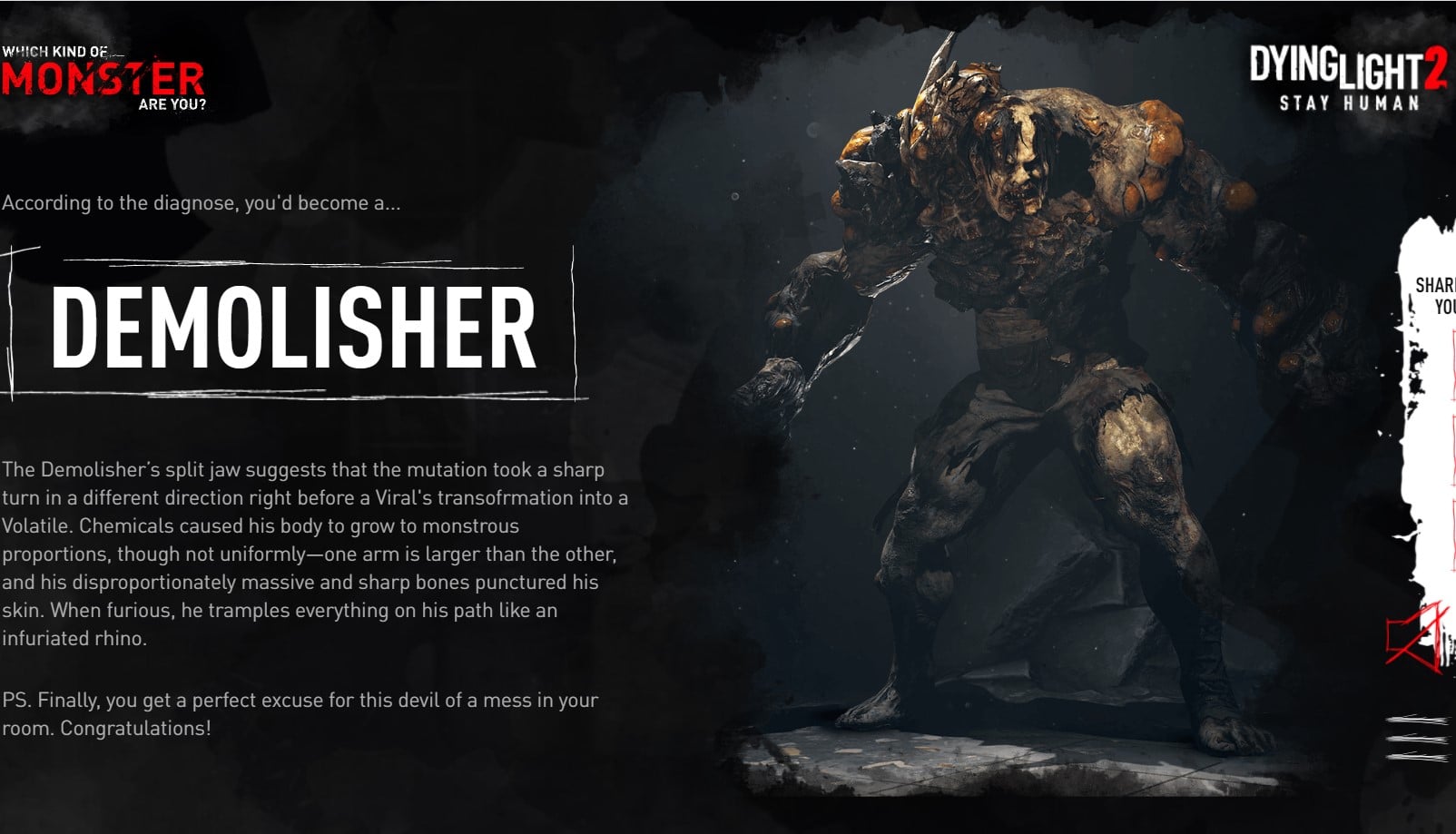 The Demolisher’s split jaw suggests that the mutation took a sharp turn in a different direction right before a Viral’s transofrmation into a Volatile. Chemicals caused his body to grow to monstrous proportions, though not uniformly—one arm is larger than the other, and his disproportionately massive and sharp bones punctured his skin. When furious, he tramples everything on his path like an infuriated rhino.

PS. Finally, you get a perfect excuse for this devil of a mess in your room. Congratulations!

Additionally, the team has also released a new starter pack for fans that features some high resolution Dying Light 2 wallpapers, along with concept arts.

Dying Light 2 is scheduled to release on December 7 for the PS5, PS4, Xbox Series X|S, Xbox One, and PC.