It’s remarkable to believe that 25 years has passed since the release of the first Gran Turismo game on the PS1. At the time, it was a revolutionary racer, not only in the insane visual presentation that seemed lifelike back then, but for doing something different than the competition. It gave players a glimpse at the real racing world by proving to be more of a simulator, rather than an arcade racer like so many others of that era.

It was a first; nothing like anything else we’ve seen, and in those 25 years, Gran Turismo has continued to flourish into being one of the best racing sims around. However, with recent releases, the series has somewhat taken a bit of a backseat, even going as far as pulling back on staple features in the spinoff, Gran Turismo Sport. Because of this, reception have been rather mixed on the recent iterations, with players looking to other sims such as Forza Motorsport and Project Cars. Gran Turismo still held strong in popularity, but one could argue that it wasn’t the best racing sim on the market anymore.

That certainly hasn’t gone unnoticed, as Polyphony Digital have taken that feedback to heart giving it their all in the latest Gran Turismo. To summarize my Gran Turismo 7 experience in a few short words; The King Is Back.

A Story Stretching Across All of Automotive History

Traditionally, Gran Turismo has always featured some form of solo play. Be that in the license mode where players can learn the ins and outs of Gran Turismo, or career modes such as A and B-specs where racers could take on unique challenges, as well as manage a race team consisting of AI drivers. Whatever the mode offered, nearly every Gran Turismo has had a large amount of solo play for the lone gamer not interested in online play.

That did change with Gran Turismo Sport however, as the title was predominantly focused on the online competitive aspect of the series. A big shift, that certainly left many feeling disappointed. While GT7 still has online requirements, suffice to say, Polyphony Digital has made a return to those single-player offerings in a grand way.

Dubbed as the Gran Turismo Café, it is here where players will find the beef of their solo campaign venture, as not only does it introduce players to the core mechanics and inner workings of all the various modes, but also provides them with a unique story deeply rooted with historical events.

Taking on the first of many quests that come in the form of menu items, players will be tasked with completing certain types of races and objectives. Most of them centered around races, though some in-between will see drivers exploring modes as Scrape, or fine tuning their vehicles in the shop.

Regardless of what the objective may be, you’ll typically be rewarded a set of vehicles by the end of it. The goal of these menu items are to essentially unlock a collection of vehicles that will be usable once unlocked. A natural form of progression outside of earning credits and outright buying the vehicles. However, the true highlight of this mode comes from the pieces of history that is given to you once you’ve completed a menu item. 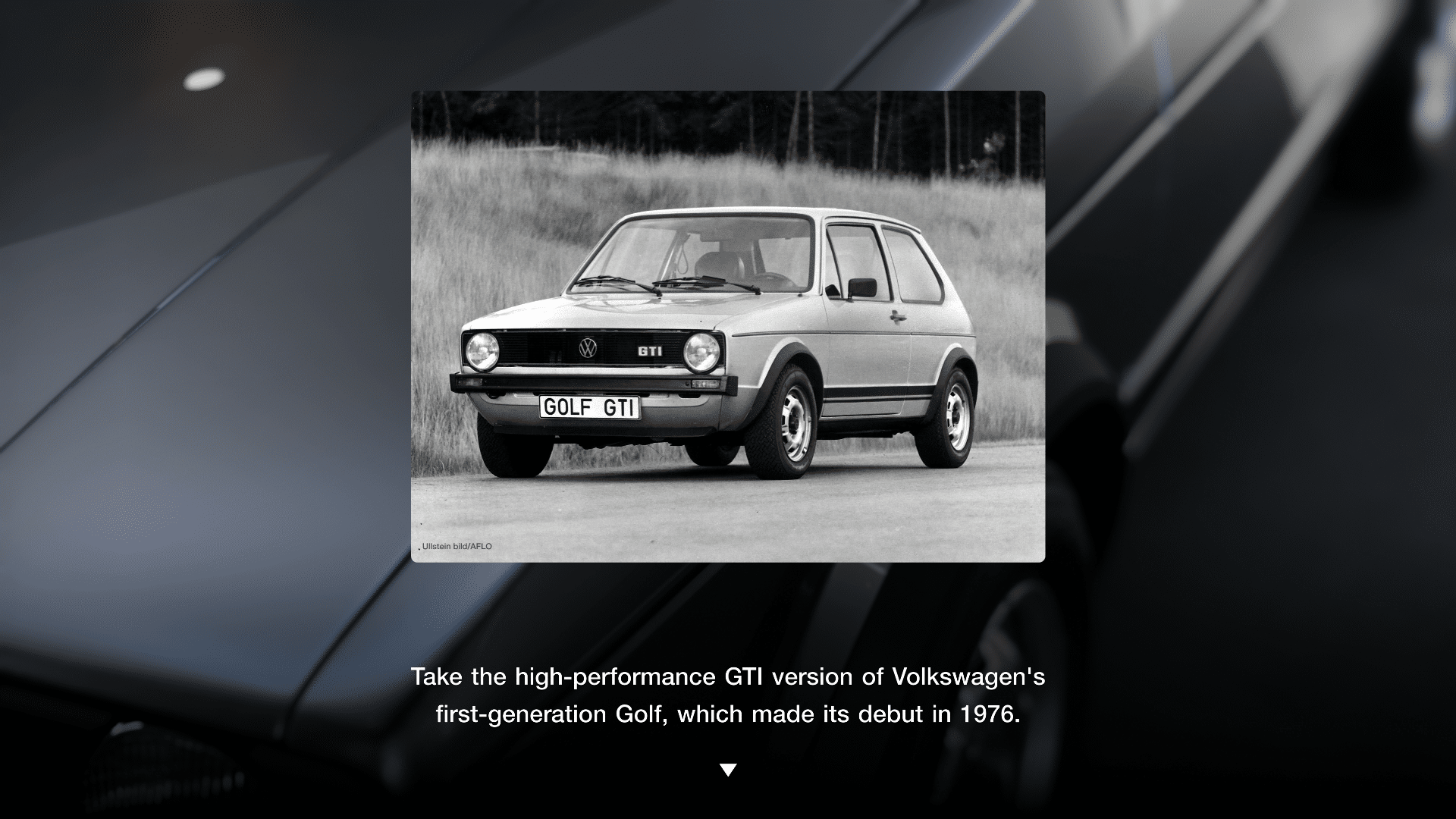 For the common non-racing fan out there this may be a bit boring, but as a fellow car and series enthusiast, I have to say this is quite brilliant on Polyphony Digital. History has always played an integral role in shaping Gran Turismo, but as a player we never quite understood that. We got our collection of vehicles to drive in, with some incredibly fun gameplay, and maybe a brief cinematic intro showcasing some of that history in past Gran Turismo. GT7, however, is crammed with it, with menu items showcasing these vehicles and lessons that are greatly filled with factual details.

It’s awesome, and in the grand arc, makes a ton of sense given the types of game that Gran Turismo is. Sure, it’s not an epic cinematic tale, or a story filled with massive set pieces where planes swoop in, but it doesn’t have to be, because again, this is a simulator. The Gran Turismo Café is a welcome addition, one that we hope continues to serve the franchise going forward.

Café isn’t the only mode that racers should expect as the license center returns in full fashion, as do solo missions, scrapes, and solo circuits. Of course if you are leaning towards the competitive side of things you can take the action online, but there is a new “Sport” mode which takes heavily from the aspect of Gran Turismo Sport and provides racers with entries into certain events and such.

If you’ve followed and played any of the recent Gran Turismo titles, then going into GT7 will be all too familiar. That’s no surprise, considering that Polyphony Digital have had the series’ physics nailed down for sometime now, but it has still had some needed improvements here and there. GT7 is very comparable to GT Sport, and whether you liked the physics there or not should give you the answer for how GT7 handles.

However, Polyphony Digital has some improvements, which should be noticeable to GT Sport players.

For one, cornering and in general, oversteering doesn’t feel as unwieldy as before. Making my way through the plethora of available tracks, I found the experience of driving around the tracks to be more “tamed” in a sense of control. While I did, and still do, experience quite a bit of crashes, I did find that I wasn’t spinning out as frequently before. Taking on corners feel “easier” in a sense that if I do happen to be taking it on too fast, I have ample amount of time to correct the course without going off-road. 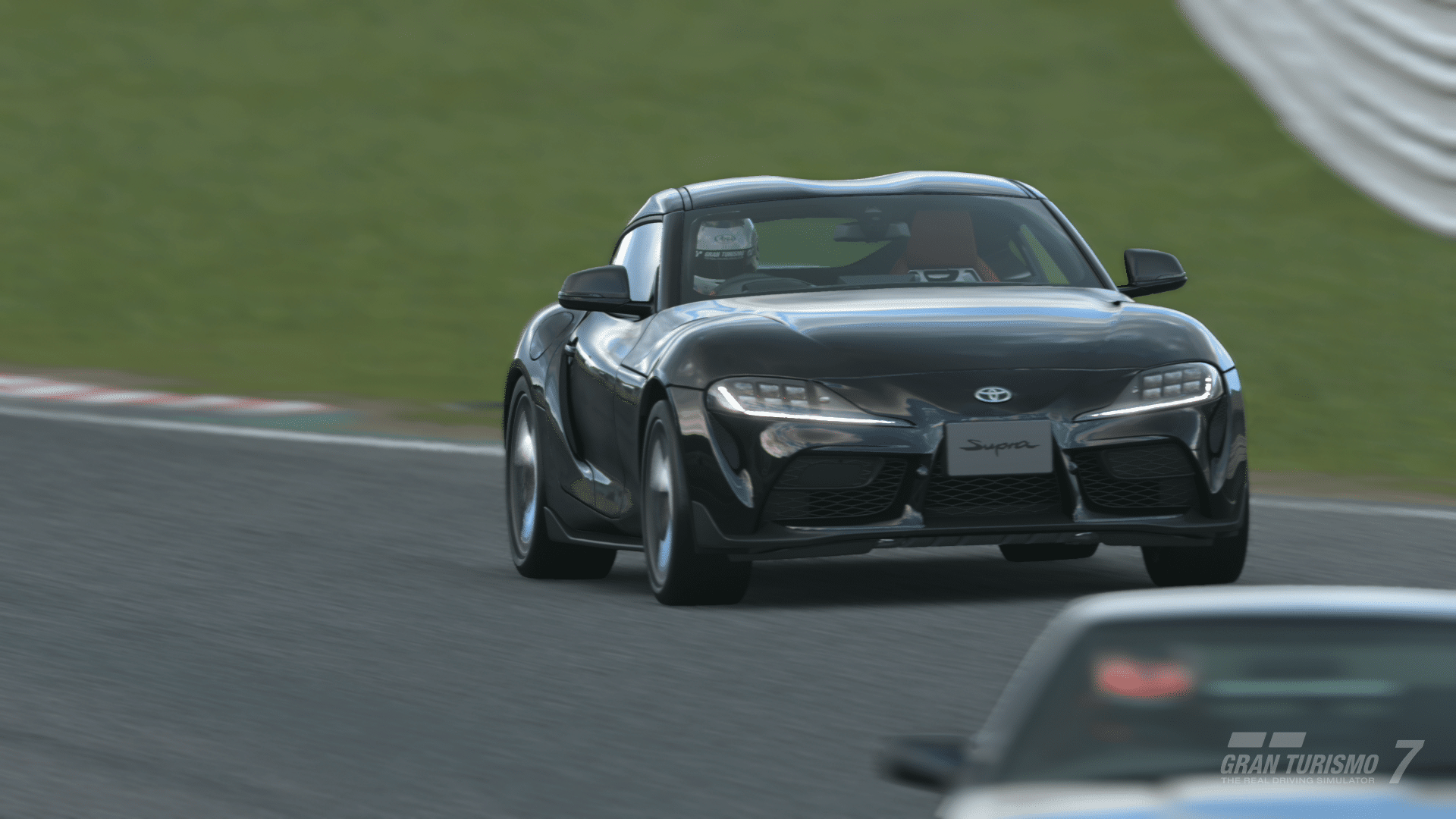 On the other hand, despite being more accessible, GT7 is by no means an easy racer. AI on the higher difficulty will aggressively attempt to block, and if overtaken, chase you, providing you with a full hands-on-the-wheel experience, as the tiniest mistake could mean a complete loss. They’re smart, as they are vicious to deal with and long time fans will undoubtedly feel the challenge they so desperately lust for.

Of course with the new expanded tuning and car customization that GT7 has to offer, there are plenty of ways to overcome those challenges, as long as the vehicle stays within the predetermined rule set. Being able to modify car tires to provide more or less grips, engine for more horsepower, brakes for betting stopping, chassis for lighter or heavier vehicles, and so much more. Each modification provides a different experience that can be felt on the asphalt.

And finally the weather system. The weather system and dynamic day and night cycle is by far one of the biggest improvements the series has made in GT7. The day and night cycle provide players with a sense of a dynamic world, though that is something that they should be familiar with. However, coupling it with the weather system, you’ll find that there is a robust new set of improvements. Take rain for example. Rain is nothing new to the GT franchise, but under GT7 it truly shines as road conditions become slick and slippery. It’s easy to get caught up driving down a straight at 180 MPH, only to hit a puddle, or begin hydroplaning and crash moments later.

What makes the weather system so damn good though is how it affects the tracks dynamically. Morning dew for example will leave small light patches of wet spot, nothing drastic but it’s there. As you progress through a track, the weather system will begin to show greater effects. Bright and sunny provides dry tracks, whereas cloudy and rainy will give off that slipperiness. But like in real-life, tracks don’t stay like that the entire duration of the day, and as the day transitions, the track itself begins to evolve. Corners that were hard to take on due to the rain now become grippier, and easier to take. Likewise in some areas where the rain provided advantages, so does the dry heat now bring disadvantages. It’s a dynamic that certainly provides players with an extensive form of play.

I’m the kind of Gran Turismo player who has been a part of the franchise since its inception to know that the best way to play is to use a racing set-up. Nothing beats that level of immersion and precision that a racing wheel can provide. However, given that PlayStation has produced one of the most innovative controllers on the market, I just had to try playing with the DualSense controller. It feels fantastic, and I’m a bit at a divide with swapping back and forth between both controller set-ups.

Driving around and feeling the vibration of the different vibration of either the tarmac, gravel, grass, and even dirt roads which make a return felt incredible. The triggers also provided resistance when pressed down, as well as a click during gear shifting. What I loved especially was playing in first-person and driving in a car with gear paddles. I would see the in-gamer shift gear all while at the same time a click would be felt in the controller.

Again, the DualSense features are absolutely fantastic, and anyone hopping on GT7 who doesn’t have a racing wheel should no doubt play using the DualSense.

The King of Visuals

If there is one thing that everyone knows the Gran Turismo series for, then it would have to be for it’s incredibly photorealistic visuals. Gran Turismo 7 is an absolute jaw-dropper. 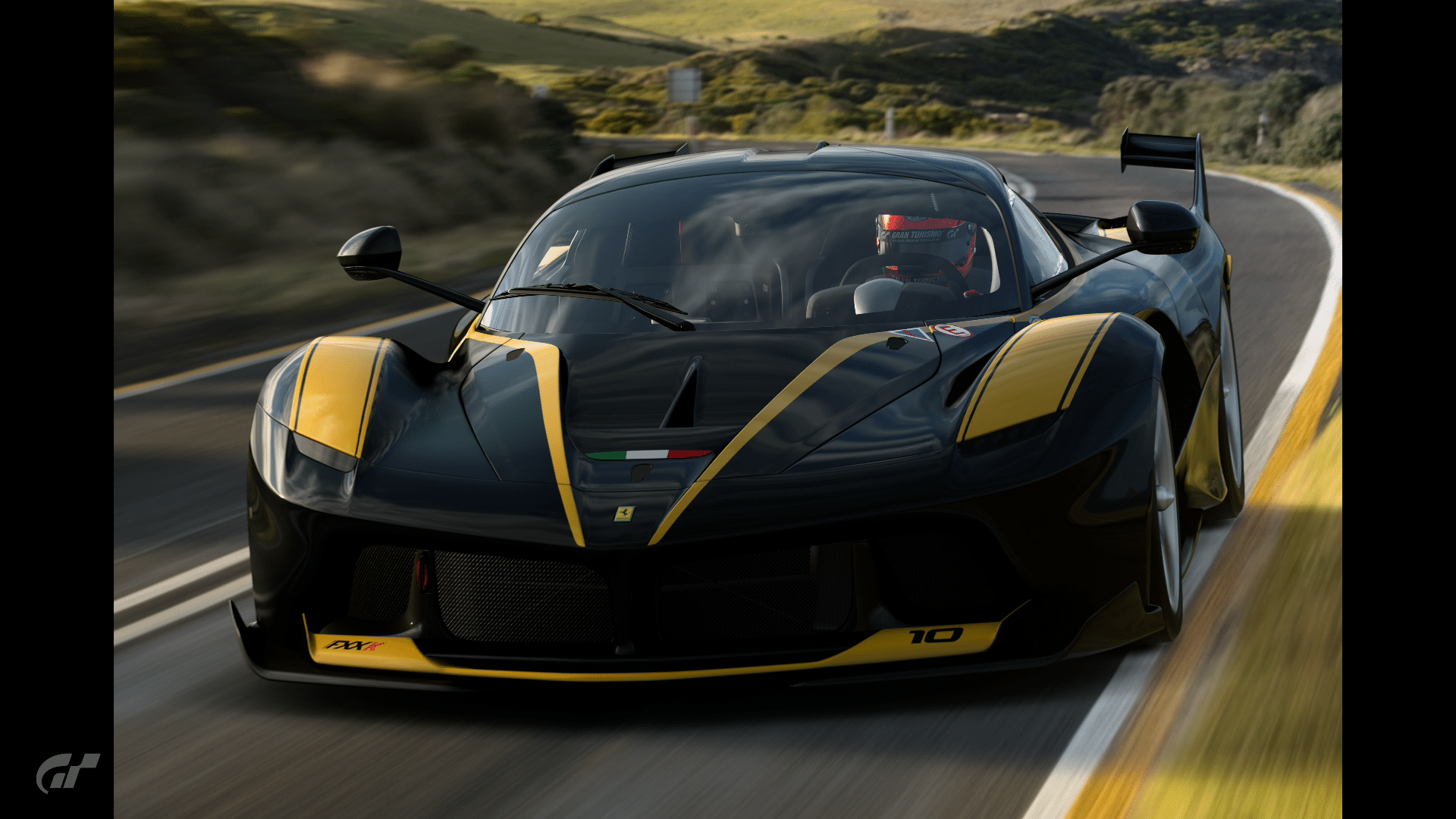 It shouldn’t be a surprise considering that Polyphony Digital has always strived at being the best racer visually on the market, and they’ve certainly managed to do just that. Running at a smooth 60 frames-per-second on the PS5, Gran Turismo 7 is a graphical showcase.

Details are rich in the environments with no indication of any 2D models tucked away. Of course, what shines the most are the highly detailed vehicles themselves, which all now sport interiors. The upholstery looks phenomenal when playing in first-person view. Simply put: I am in awe at the level of detail that Polyphony Digital has put into each vehicle.

What’s more there is a ray-tracing mode that adds a level of reflection unseen in the Gran Turismo franchise yet. Messing around in the Scrapes (the mode where you can set a car to your picking in a realistic backdrop) has never been more addictive to play around in.

Gran Turismo is visually astonishing to say the least. The only thing I do wish was that the rain effects in first-person were a bit more impactful, as Driveclub still holds strong the title of best rain effect in a racer in my opinion.

Gran Turismo 7 represents a true return to form for Polyphony Digital. Despite being the seventh mainline iteration, the team is still able to keep the series feeling fresh with its new coat of paint and innovative technology with its new weather system (and even a new AI tech called “Sophy”). For Gran Turismo players out there thinking this might be a half step measure, it’s not; it’s a full blown experience and so much more. It’s an essential must-play for any fan out there and it just might be my favorite Gran Turismo thus far.

Housemarque Next Game Is a Brand-New IP, Studio “Concepting It Out”