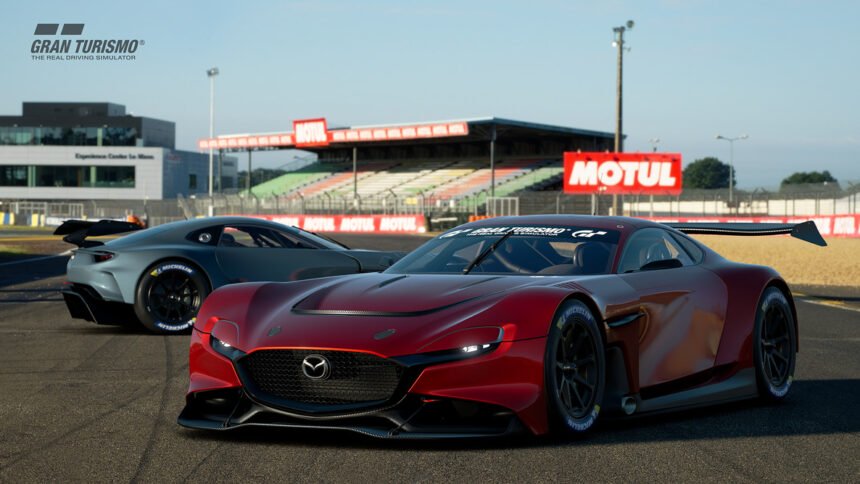 Polyphony Digital has continued with their amazing post-launch support of Gran Turismo Sport, as the GT Sport update 1.59 May 22 patch is now available for download! This brings in a new car in the Mazda RX-Vision, and more!

Aside from teh patch notes, we also have a trailer for the Mazda RX-Vision GT3 concept as well as an overview of the car.

3. Decals
– New to Decals in My Library are Mazda and Mitsubishi logos, as well as the 100th anniversary Mazda logo, which can be acquired when selecting a car from Mazda or Mitsubishi in the Livery Editor.

– We fixed an issue where a penalty was wrongly assessed occasionally when exiting out of the pits during online races.
– Various other issues have been addressed.

The MAZDA RX-VISION is a concept car announced at the 2015 Tokyo Motor Show. Based on Mazda’s “Kodo – Soul of Motion” design theme, this was a challenge to create the most beautiful FR sportscar that Mazda could come up with. This car is also powered by the next generation rotary engine “SKYACTIV-R”, a dream that Mazda wants to bring to life in the future.

The MAZDA RX-VISION GT3 CONCEPT expresses the design beauty of the base car in the form of a more aggressive race car. To meet the performance requirements of the Gr. 3 class, the design draws from the 787B engine concept, with a 4 rotor engine brought back to life using SKYACTIV technology. This new rotary engine is mounted in a lightweight body to achieve unprecedented performance.

While this GT Sport update 1.59 May 22 patch doesn’t have a lot of gameplay fixes. the fact that there’s a new car more than makes up for it, no?

Once we get more news about the new cars or tracks hitting the game, we’ll let our readers know.