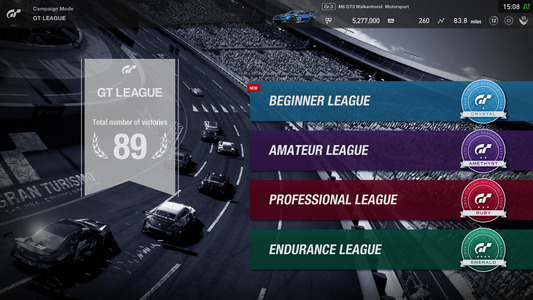 Not only are there new cars, and course layouts, but there’s also the introduction of the new single-player mode called “GT League.” Check out the complete additions below.

The “GT League” will be added to the game. This is a single player game mode including several race series appeared in the past GT titles, including fan favourites such as the “Sunday Cup”, ”Clubman Cup”, and ”FF Challenge”, in which players can participate with a wide variety of cars that can be tuned.

A variety of supercars and popular Japanese cars

We have added a wide variety of cars, including popular cars from the Japanese golden era of the 90s, Supercars from all over the world, and Monster pickup trucks. This will add greater variety of car selection in races and events.

The “Yamagiwa + Miyabi”, a new layout of the Kyoto Driving Park

We have added the “Yamagiwa + Miyabi” layout, a 6.8km long track connecting the “Yamagiwa” and ”Miyabi” tracks of the Kyoto Driving Park. The connections add 2 hairpins to the track which increase the track’s level of technical difficulty.

1. Campaign Mode
– ‘GT League’ has been added. This is a mode in which you can challenge a variety of races using cars from your garage. (For every league, there is a prerequisite Driver Level required to enter.)

3. Tracks
– A new layout, the “Kyoto Driving Park Yamagiwa + Miyabi” has been added.

4. Scapes
– A new ”Season’s Greetings” group has been added to the Top Screen. This includes the addition of new photo spots.

9. Controller
– The DUALSHOCK®4 motion sensor steering sensitivity has been adjusted so that steering requires less inclination.

11. Sound
– Tyres screeching sounds have been adjusted;
– The sound balance of the Chaparral Chevrolet Chaparral 2X Vision Gran Turismo has been adjusted.

12. Additional Language
– Thai language support has been added to the Asian version.

If you still haven’t picked up Polyphony’s racing game, go check out our review to see why it’s worth your hard earned cash.