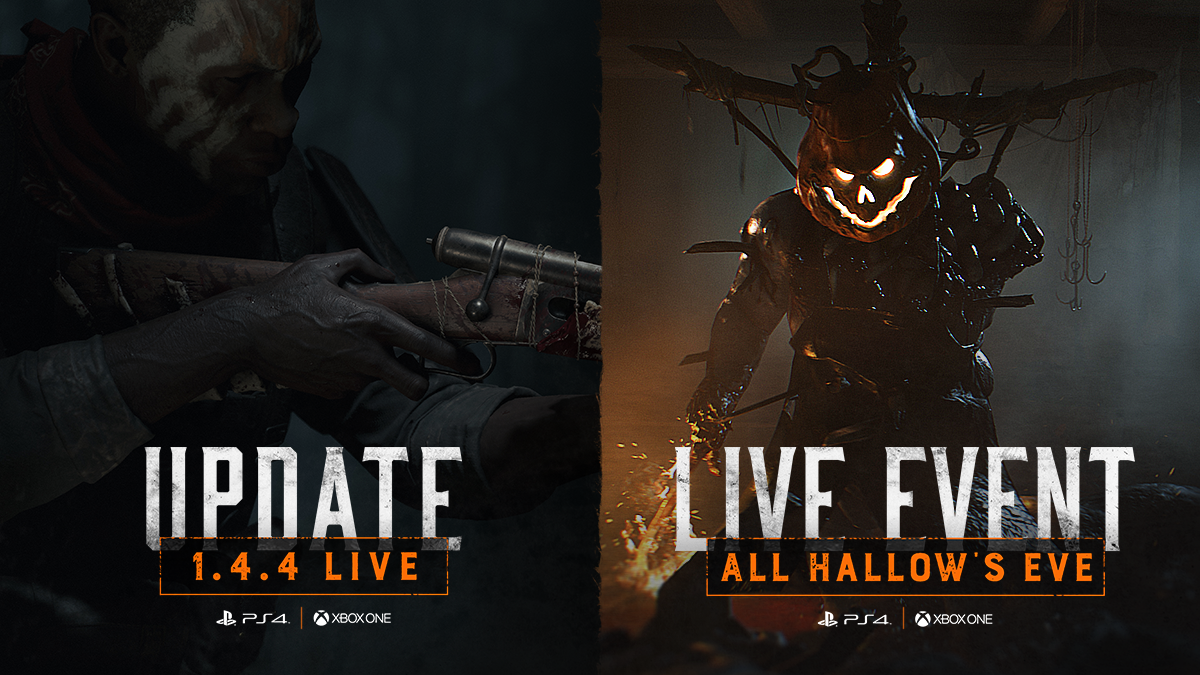 Crytek has released the Hunt Showdown update 1.13 November 6 patch which brings the patch 1.4.4 (internal numbering code) to consoles! his is the game’s Halloween content drop and includes new weapons and gameplay changes.

Our first Live event arrived to consoles!You can participate and earn exclusive rewards until 16.11.2020 15:00 CET!

Learn more about the event here, and about the rewards here.

Description: “Named for a most fearsome and relentless hunter of the wood, in a bygone time this rifle won its renown taking down the prey etched on its receiver: egret, doe, buck, and bear. Now, this Martini-Henry IC1 Marksman sights itself on bigger, deadlier prizes. “

Description: “Sanctified in something beyond mortal understanding; the work of this Martini-Henry Deadeye is hallowed. Unfortunates who find themselves sighted in the purview of the Sacrosanct will face their sins, all too soon.”

Description: “In Christian scripture, archangels led the celestial host against the forces of darkness. In the bayou, this Springfield 1866 Marksman is used to the same purpose: to drive the creeping forces of darkness out of the bayou and return the region to the divine light.”

Description:” Fyodor Brusilov was gifted this Nagant M1895 Precision to commemorate his first voyage as captain of The Polar Star. The ship never reached its final port of call, and all hands were declared lost at sea – until this pistol turned up in the bayou.”

Developer Notes:As some of you probably noticed already at this point, we have been looking into the “Quick Swap Mechanic” which became an integral part of the game for some players and has been much discussed in the community lately. We acknowledge that, which is why it will stay in the game. However – like all other mechanics in the game – it must also subject to balancing changes. The changes we made are meant to solve multiple issues:

Players often found themselves unable to start sprinting instantly after a shot was fired because the weapon was technically still aiming until all recoil was applied and therefore locking movement speed. We reworked parts of the system to ensure more player agency over their hunters’ mobility without the need for such workarounds. Overall the controls should feel a lot smoother and more responsive that way.

When we introduced the faster weapon swapping during Early Access, it was to try to remove some clunkiness from the controls. However – unintended by us – this change also gave rise to the dominant strategy to quickly swap to your second weapon after a shot and attempt to score a follow-up hit to finish your target off. While being a skill move, of course, it shifted the power of certain weapons, negating their built-in disadvantages like being a single-shot weapon too much. This strategy was further amplified around the 1.0 full release, where we reduced weapon sway across the board to make the game more accessible for newer players. Some players perfected this quick swap meta to the point that it started feeling abusive and “gamey” in a game that tries to use the rough mechanics and shortcomings of the weapons in a way to balance them against each other.

With these changes, we want to take one step back and reorder this part of the game a bit. Quick swap is meant to stay, but becomes a tad more difficult to pull off – hopefully making it less of a dominant strategy by veteran players and opening up the arsenal more to other options. Players will at least have to suffer the full recoil of the shot before they can change weapons, but on the other hand, they gain a lot of mobility out of the box.

New Trait: Necromancer“Using Dark Sight revive a downed partner from a distance, though at the cost of a small amount of health.”

Developer Notes:We like what the Serpent trait brought to the game. It enables players to turn a tricky situation around, and it provokes new tactical decisions even when no one brought it into the match. In a similar fashion, “Necromancer” should make it more difficult to just wait an engagement out for teams that have the advantage anyway. It will require a better understanding of sightlines, positioning, and potential crossing points from all players involved. To keep the feeling of vulnerability during and after a revive we added the cost of health so that commitment is still key.

Developer Notes:We like that players can commit to highly effective loadouts before a mission. However, we also understand that looting weapons from other hunters can sometimes enable players to adapt to new circumstances and open up new immediate strategies. With this change, we want to introduce more situations for players to make smart decisions.

Developers notes:We realized that for newer players, facing off against the Spider, an extremely mobile opponent while learning the controls and gameplay ended up being too frustrating as their first experience with the game.

The Butcher will allow players to pick up the basics of fighting bosses (making use of weapons scattered around, frenzy mode, dangerously strong attacks to dodge, etc.) while being much easier to hit, allowing them to get used to the combat and still feel the satisfaction of taking down a boss.

We hope that this, amongst the other changes we have been working on, will help to improve the overall onboarding experience!

Double of Nothing DLCThe weapons in the “Double or Nothing” DLC have been split up. It is now possible to equip each pistol on its own, and mix and match with others of their type. They will still be shown as a unique weapon when the pair is equipped.

​In addition to the notes, Crytek has also listed the known issues in the game which you can read about here.