As you may have heard, January’s edition of GameInformer holds a ton of details on Bungie’s upcoming, shared-world, sci-fi shooter, Destiny, including a look at character customization, gameplay, mission types, locations, and more.

If you haven’t been able to get your hands on an issue, you’ll be happy to know that Reddit user USplendid has got you covered. Compiling details from various Destiny forum posts, USplendid has composed a hefty list of Destiny knowledge that answers a lot of questions many of us have about the game.

You can read up on some of the important details below, but be sure to visit USplendid’s post for the full scoop. 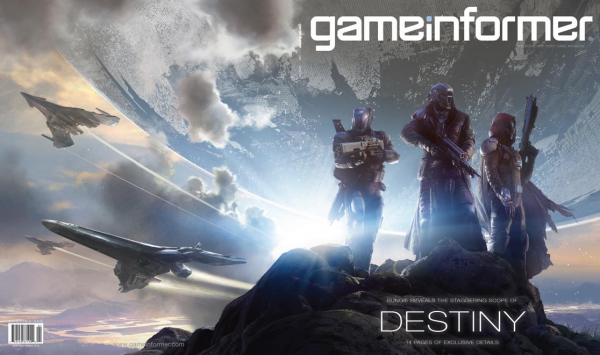 Race and gender are merely cosmetic. Players will be able to choose among the Humans, Awoken, or Exo’s. Luckily, players will have access to multiple character slots, so you can play around with different combinations of races and classes. You can customize your face, which will be seen in non-combative areas. The three player classes; Titan, Warlock, or Hunter, will all be able to wield the same weapons, but their armor sets will differ as they will be tuned for each class.

Players will also be able to pick a “Focus” to further customize their character and fill a more specific role. Building your “Focus” involves working through a set of tiered upgrades, ranking from 1 to 20, which includes passive bonuses, weapon specialization bonuses, new grenade types, movement upgrades like double jump and teleport, or melee bonuses.

Armor and weapons, which also have their own upgrade trees, along with Focuses are meant to be synergistic, meaning you’ll want to select equipment and abilities that compliment each other for maximum effectiveness. There will be four tiers of weapons and armor; Basic (white), Common (green), Superior (purple), and Gold (exotic).

Like most MMO’s, all players will be dropped into one massive world, but will be linked with smaller groups at appropriate times and locations. You’ll gain XP as you complete challenged and kill enemies, some of which you’ll be unable to engage at earlier levels and which you’ll have to revisit at a higher level. Side missions will also present mini-challenges that can appear at any moment which players may or may not choose to complete.

You’ll be able to travel the world in your own personal “Sparrow” vehicle, which you can customize to your liking. That even extends to your own space ship which other players will be able to see as your drop in and out of activities. This ship is what will allow you to fast travel to locations that can be brought up in your in-game map. You’ll also be able to steal enemy vehicles, but not keep them.

Each player, with their own unique focuses, will have different movement abilities initiated by double tapping the jump button, different grenade types thrown by pressing the left bumper button, and different melee attacks. Special abilities are activated by pressing both bumpers at the same time.

“Strikes” are relatively quick co-op missions that can be accomplished in smaller groups, while “Raids” will offer highly challenging story missions that you’ll be able to take on with larger teams. Competitive Matchmaking is also available between the different Guardian Factions found within the game.

Environments are highly interactive with areas that can only be reached through special movement abilities and other dynamic events.

“The Tower” will act as your non-combative hub where you can interact with other players and buy and sell goods. There are even designates areas for specific classes. Among other locations, players will also be able to visit areas like Old Russia, seen in the E3 demo, the Moon, Venus, and Mars.

Your enemies will consists of races like the Fallen, the Cabal, the Vex, and the Hive. Each race will be built up from a number of different enemy classes to keep you on your toes.

At last, its nice to have some solid details on Bungie’s upcoming project. Destiny sounds like it’s shaping up to be one of the more interesting titles of this coming generation of games. Again, be sure to read the original post for full details.

Killzone: Shadow Fall Developers Talk About The Next Update And Top 15 Feedback Items