Note that Ubisoft has mentioned that there will be “data repackaging” which means a larger than usual download size. 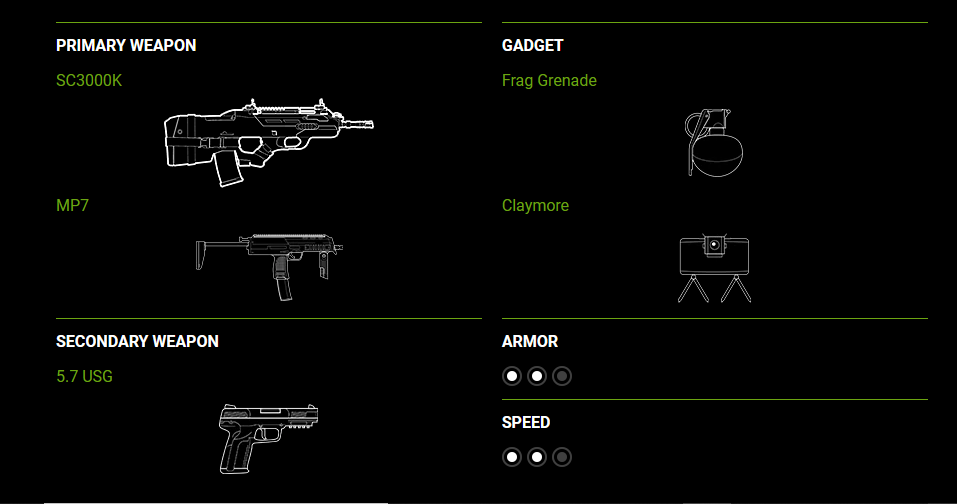 Intel is crucial to a good attack strategy, and Zero is well aware of that. His Argus Launcher is equipped with very special cameras that can lodge themselves into breakable and reinforced surface to surveil either side.

Yes, these cameras can cover two angles and effectively allow you to spy on the opposing team. Argus Cameras do have one more quirk though: a single laser shot, perfect for destroying key elements in the Defenders’ setup or drawing attention away from choke points.

MAP REWORK: CHALET
Chalet has been with us for a long time, and it has a special place in our hearts. Unfortunately, in its previous state it was not as viable as other maps, so we wanted to give it the love it deserved with a proper rework.

To modernize the map, we focused on the Objectives and how balanced they were.

The Basement and Kitchen sites were already quite strong, so the changes there were minor. One hallway was added to improve rotation between the sites in Basement, and we switched out the Trophy site for a new one in Dining.

For Bar and Gaming, the difference is mostly in access and rotation, as it is for most of the map. Doors were moved, and a new hallway on the South side links them together.

Finally, you’ll find the biggest changes with Bedroom and Office. The stairs that led up from the first floor have been moved to connect Trophy and a brand-new room that replaces the balcony next to Master Bedroom: the Solarium. The Bathroom no longer connects directly into Bedroom, but rather serves as a rotation point.

A few other noticeable changes include the extension of the Mezzanine to connect to Office Balcony (where most windows have been blocked), roof access with new rappel points, and Wine Cellar no longer being separated into two rooms.

Overall, you’ll find that the map has been greatly reconfigured, whether it be by changing the cover inside objectives, or moving access points, or even offering new options for rotation. However, it remains widely recognizable and keeps its signature thematic.

PING 2.0
The new Ping system is coming! On top of regular yellow pings, you’ll now be able to use contextual pings both while in Character and while using Cameras and Drones. You’ll also be able to keep pinging after being eliminated, so your ability to give your teammates intel will remain.

A few notes, however:

You can reveal opposing Operators by pinging their primary gadget.
Regular yellow pings have assigned numbers to make for easier callouts.
The reticle used to determine where your ping will go can be turned off in Options.
When using a controller, the default Ping input has been switched with the Swap Fire Mode input.
Take the time to familiarize yourself with this new system. It’s bound to change the way everyone approaches and considers sharing intel with their team.

MAP BAN
We’re introducing a new feature called the Map Ban that will allow players to gain more control over the maps they play, both on Ranked and Unranked.

MATCH REPLAY – TEST SERVER ONLY
Rainbow Six Siege is an ever-evolving game and always striving to bring the best to its players. This season, we’re bringing a new feature to our Test Server only, as we are in the early stages of development.

Introducing Match Replay, a function that records your last matches – up to 12 of them – locally on your own PC. The feature is enabled by default in General Options, and you’ll be able to access a “WATCH” section directly from the menu allowing you to playback your last few plays, recorded at an average of 30 MB per minute of gameplay. Once you’re in the replay, you can use the Spectator mode tools to check any top-down view or any first-person view – whether yours, your teammates’, or someone from the opposing team.

We’re aiming to have this feature be helpful for all types of players at any level, from new players looking for knowledge of their maps, to pros and coaches looking for a new strategy, to even analysts and content creators. This could also be a great tool to avoid cheating in the community.

By releasing the feature this season on our Test Server, we intend to gather all your feedback on this feature first, then pull it back to polish and improve it.

NEW OPTICS AND SIGHT COLORS
In an effort to make Rainbow Six Siege a game anyone can enjoy, we are introducing a new feature that will increase the accessibility of the game. We’re implementing new optics and sight colors to allow for a better experience to players that are colorblind or visually impaired.

Our menu section now includes an “ACCESSIBILITY” tab that proposes various color options adapted to different forms of color blindness (Deuteranopia, Protanopia and Tritanopia). A custom option is also available for anyone to adjust the sight colors to their preference. Players will get to preview those sight options in small and full screen mode before making their choice.

We aim to increase the comfort level for all of our players and ensure everyone has the best experience possible.

The goal of this update is to bring some balance to the Defending team, allowing Operators that already have a lot of preparation before a match to leave it to others. This can also allow for more experienced player to take on the reinforcements if newer players have less knowledge of the map. This feature is also available in PvE, in Protect Hostage.

At the moment, we have removed the amount of reinforcements HUD for the caster. The HUD for the Reinforcement Pool should be added in the coming months.

THATCHER CHANGES
The Disabled State for Electronic Gadget (DSEG) is an update aiming to add a “disabled” state for gadgets, besides “active” or “destroyed”. The duration of this states depends on the ability from the opposite operator that caused the gadget to be disabled. Gadgets in that state can still be deployed and can still be detected by Operators with the proper gadgets.

In this new phase, we’re aiming to implement a loss of functionality for all Defenders gadgets across the board when Thatcher uses his EMP Grenade. Rather than having some gadgets destroyed and others disabled for a short amount of time, we’re choosing to unify the behavior of gadgets affected by Thatcher and have them all be disabled temporarily.

SQUADFINDER
We’re offering a brand-new service called SquadFinder on our website to help Rainbow Six Siege players find the perfect teammates and build the best Squad in the game.

SquadFinder allows players to create a profile based on their in-game data and play habits and set-up a request following their game sessions, languages, playstyle and game mode. The matching system will then connect them to players with similar stats and with good compatibility. From then on, you can send and accept friend requests, allowing players to gain new teammates and friends to join the fight.

The more we are, the better the experience will be!

SIEGE STATS
Another update we are proud to offer is the arrival of a stats tracker available to all players on our website, available during the season. You have been vocal about how important tracking your performance is, so you will soon be able to access your history through the brand new MY SIEGE STATS section on our website.

With only your username, you will be able to access your stats for the current season and break it down into monthly and weekly summaries. You’ll also be able to access your previous seasons, add friends to see how their stats stack up to your own, receive weekly personalized recaps of your best matches and check out the advanced stats pro players use to track their performance!

BALANCING CHANGES
With the introduction of the hard breach charge, new sights and scopes, the change to the DSEG 1.2, and other gameplay balancing updates in this update; we’re holding off on operator-related balancing changes for the time being to evaluate their impact.

Maverick now has an additional blowtorch canister, with 6 in all (up from 5).
This gives players more leniency when rationing their fuel to open hatches. On average it requires approximately 2.3 canisters to open a hatch, so an extra canister will be a bit more forgiving of mistakes.
​

See above for information on the new secondary Hard Breach Charge gadget and changes to Thatcher’s DSEG 1.2.

2.5x ACOG – Zoom level changed.
3.0x Scope – No longer a unique option, and will be an option for most DMRs (depending on balancing needs)

With the introduction of new sights and scopes, we’ll be redistributing them based on operator, gameplay, and balancing needs.

Winning/Losing a ranked match will now give a minimum of 25 +/- MMR gain or loss. We’ve also tweaked the MMR gain/loss distribution to prevent diminishing MMR returns for players who play lots of ranked games.

You will now receive in-game notifications after a player that you reported is sanctioned. These will replace the ‘Thank you’ emails for reporting a banned player. Play nice. Play fair. Report those that don’t.

VOTE-TO-KICK REMOVAL (LATER IN THE SEASON)

Later in the season, we’ll be removing vote-to-kick from Quick Match—the only playlist which had this feature. We’ve been monitoring the use of vote-to-kick and have found that it has since strayed from its original intent, leaning towards a more toxicity-related use case. With the numerous RFF conditions in place, as well as the improved player-reporting panel, we feel the original need for vote-to-kick should be fulfilled by these other options for reporting toxic players instead. We strongly encourage you to report toxic players via the in-game reporting panel so that they can be sanctioned.

A new player card is present at the bottom-center of the screen that will help viewers swiftly notice which player they’re spectating. This is extremely useful, especially when switching quickly between players’ views.
Player’s life bar has new feedback to easily spot players taking damage
Activating and deactivating the defuser has a new VFX to make this action more noticeable when it occurs during the round
Drone Info is now present in the player card even if the operator is dead or in the DBNO state
Abilities and gadgets have new VFX for their states when they are ready, active, cool-down, etc.
Hostage and Secure Area game modes are now shown as feedback in the HUD
​

Moving forward with our push for behavioral consistency, we’ve built further on our Y4S4 projectile map asset destruction changes and brought it to deployable.

To make gadget deployment behavior more predictable and consistent, deployable gadgets will now either destroy fragile/smaller map assets when deployed on them (paintings/posters), or deploy without impediment on normal textured surfaces (paneled walls/carpets).

We’ve updated the RFF rules around hostage to be more consistent and transparent to prevent ambiguity and abuse.

We have begun the process of refactoring our sound system, which will essentially repackage the way sounds are stored and connected to the game. For more information on what that means and how it will improve our sound system, please see Top Issues & Community Concerns

If we spot any changes not mentioned here, we’ll update the post.