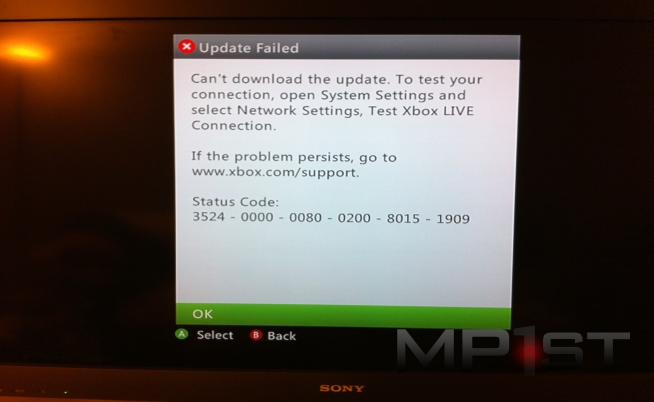 UPDATE: After a couple restarts, our updates have been successfully installed and we are able to connect to Live. This seems to be the case in North America. However, some readers in Europe are still experiencing difficulties (thanks J.A!). By the looks of it, the teams behind Xbox Live are working on the matter and slowly but surely ironing things out.

Updated your Xbox 360 console recently? If so, chances are you may not be able to play online at the moment.

Microsoft recently released a brand new Xbox Live update that drastically changes the layout of the dashboard and adds some new features here and there. Unfortunately, thing’s aren’t going over so smoothly and many gamers are experiencing issues either trying to connect to Live, or even trying to download the update.

We’ve done some testing ourselves as well. Personally, I was told the update was unable to be downloaded. After clicking ‘OK,’ it began downloading (…I know). My system reset and began updating until I once again received the same error as before. Upon restarting my console. The update seemed successfully installed, however I still am unable to connect to xbox live, despite having aslo restarting my modem/router as suggested. Some staff aren’t even able to download the update at all.

Xbox Support had this to say so far: “Not a glitch, VERY busy servers.” They’ve suggested trying to “Reboot your console, reset your modem and router and try again.” Also, “be sure to accept the new Terms of Service.” They added, “The issue is being looked into. You’ll love the new features.” Larry “Major Nelson” Hyrb also had this to say: “Some Xbox LIVE members are getting a connection error when signing in to LIVE. We are aware of the issue and the team is working it!”

Let us know in the comments if you too are experiencing issues with the new Xbox Live update.

Modern Warfare 3 – “Spawn Logic” Looked Into, “No Shotgun Buffs” and Much More