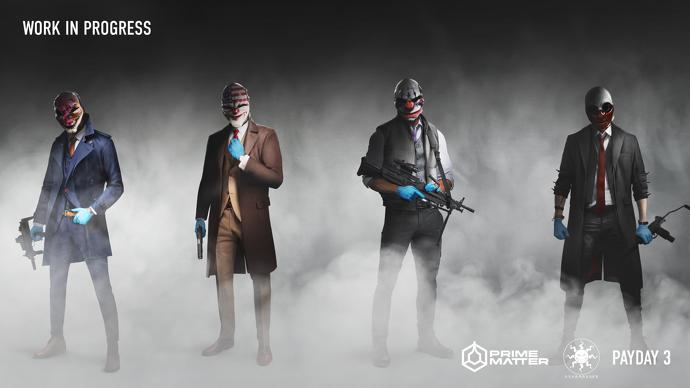 The Payday franchise celebrated its 10th anniversary yesterday, and developer Starbreeze teased a bit of Payday 3 characters, story, and other aspects as part of the huge livestream event. With the game currently in the midst of development, check out some of the finer details on Payday 3 below.

The game’s director, Erik Wonnevi, shared a fair bit of information during the anniversary livestream (time stamp at 3:03:00). The game’s location will be set in New York as opposed to the Washington area in Payday 2. Starbreeze also noted that this rendition of New York City will be ‘enormous,’ although whether that means that the game will be open world or a much more in-depth sandbox is still up in the air.

Payday 3 will see the return of the original four characters: Dallas, Hoxton, Chains and Wolf. According to the director, circumstances have lead them to restart their life of crime, leading to new heists in Payday 3.

It would also appear that the Payday gang’s notoriety has somewhat caught up to them, with Starbreeze noting that the media “is now covering the gang, their exploits… and who knows what might come from that…”

Of course, with the game eight years away from Payday 2, a lot has changed in the world, and this also reflects in the in-game universe. Of particular note is the rise and domination of the digital age, “with software giants, crypto currencies, mass surveillance and the Dark Web all playing a role in the gang’s new gadgets, challenges and opportunities.”

What do you think? Are you interested in the characters and the setting for Payday 3? Where will this new journey take the four robbers? Let us know in the comments below!

Battlefield 2042 Sundance Confirmed to Be Non-Binary; Revives to Be Faster & Offer “Better Feedback”

Guardians of the Galaxy File Size Is Only 31GB on PS5, but 60GB on PS4