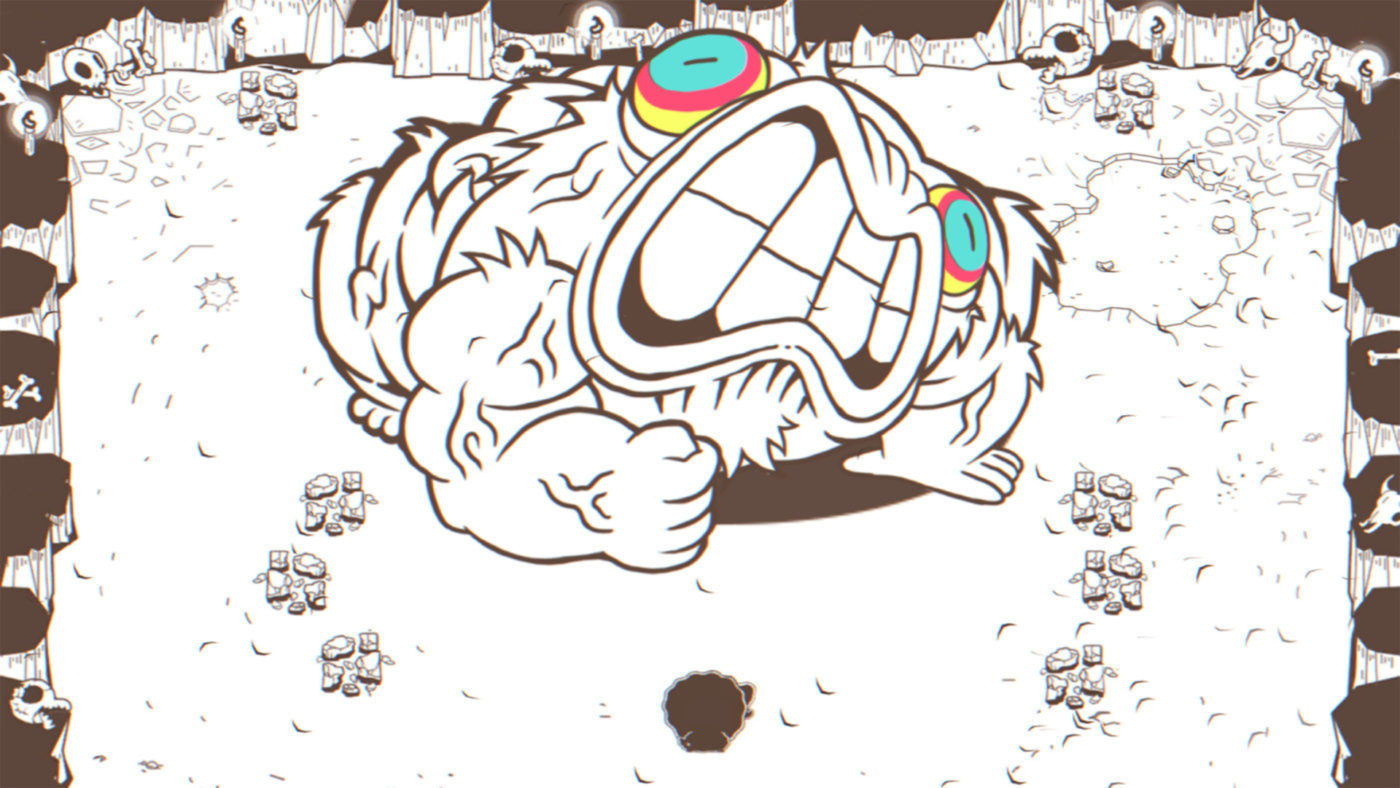 This past console generation saw a massive surge in indie and small developer games being released. With the increased accessibility of publishing options and all three big console manufacturers creating robust indie developer programs, anyone with passion and the determination to get a project across the finish line is likely to be able to put it out in some form. The result has been a huge boom in unique indie and small developer game experiences no big triple AAA publisher would normally risk. Both for nostalgic purposes and I imagine for costs sake, a fairly large portion of these games have had pixel art graphics. But with Ponpu, Argentinian-based developer Purple Tree Studios, mostly known for their series of Cartoon Network licensed games, break this mold. Read on for our Ponpu Review!

Out of This World

Ponpu is at its core an action exploration game with an art style that makes a serious impression. Normally I prefer to not start off by talking about the visuals but I think the visuals are this game’s best feature. The whole game is done in a mostly-black-and-white drawn mildly anime style. The only color being the four different variants of eyes the space ducks you’re playing as have and the feathers and keys you’re collecting in the single player. The striking visuals are far and away the most memorable part of the game. While not as singular as Cuphead for example, it stands on its own. If you like graphic design or put a lot of stock in graphics and visuals then this game is likely worth the cost of admission.

A Quack Word On Story

The story is presented in a short but striking psychedelic introductory cutscene. The Duck God has awakened and sent out his servants to overtake the galaxy. The Secret Duck stands opposed to this tyranny and has taken under his wing one of Duck God’s servants that accidentally fell out of the giant eggs flying through space to invade the cosmos. Plainly said, the fiction is wild if not strongly emphasized.

I want to touch briefly on the audio design. It isn’t nearly as unique or dramatic as the visuals. It does its job and it isn’t obstructive to the game, but it’s basic. This is one of the better “listen to a podcast or your own music” games I’ve played recently. There is one exception to this though. The voice for the announcer at the title screen and at the beginning of a level run is an incredibly stark contrast to what you’re seeing. I was actually pretty taken aback when I first heard it and I kind of dig it. I think it adds to some of the bizarre nature of what the game seems to be going for.

Where the Rubber Ducky Meets the Road

The single-player campaign is split into six worlds, each with three levels and a boss. The gameplay is clearly inspired by old school puzzle and arcade games. It’s simple, but it has the associated difficulty that those older games have. As a cosmic duck, you have four abilities at your disposal: dropping an exploding egg, deploying a shield that works similar to the shield in Super Smash Bros. in that it slowly deteriorates and then stuns you if you hold it, and a selection of egg bombs with special attributes like digging into the ground as a mine or staying in place until you detonate them. The main mechanic is spitting out an explosive egg and then pumping your shield to send it sliding in a straight line. In fact the whole game is constructed on a grid system that the player character and the enemies walk along. Ponpu is built on the precision of having the game run on the four cardinal directions. 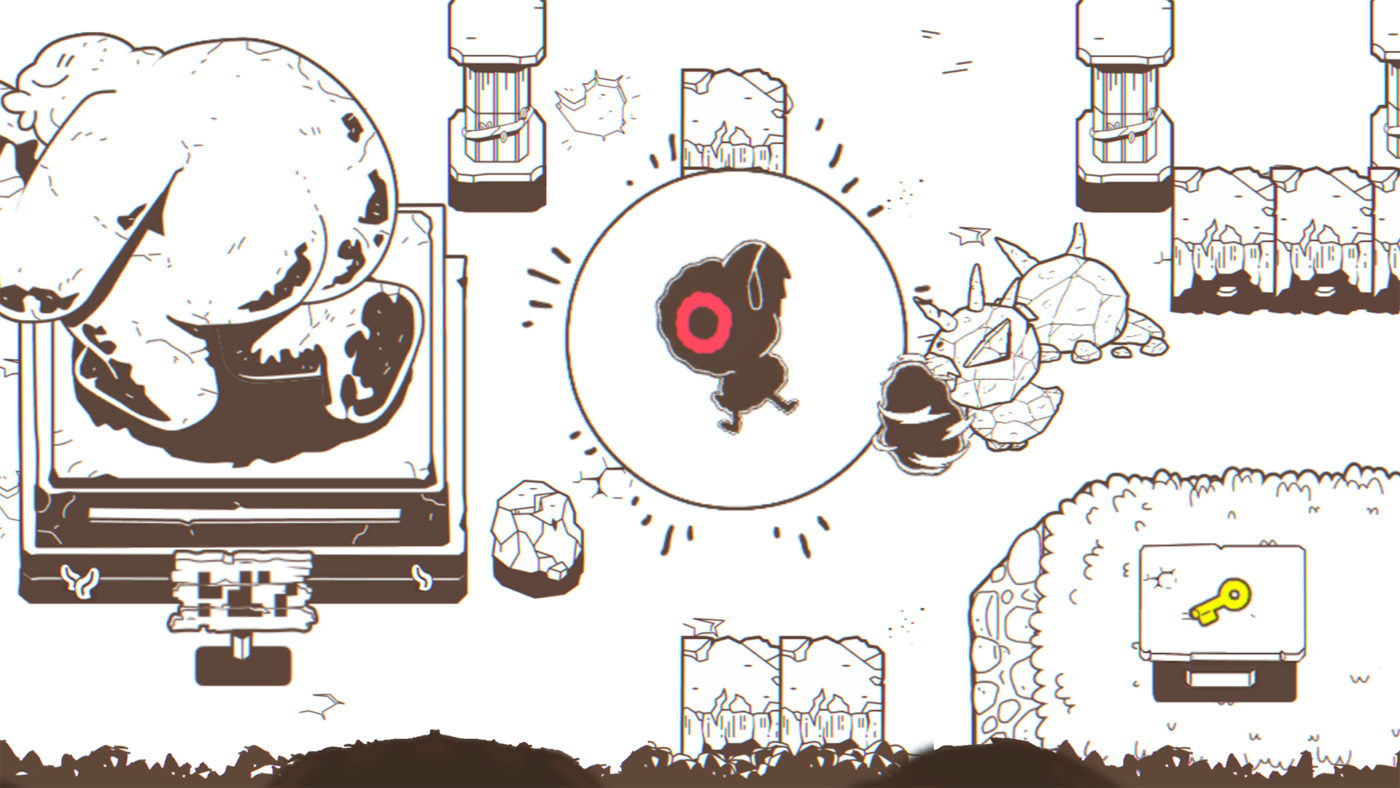 Deploying your shield both launches a deployed egg, and stuns nearby enemies. Just like ducks do in real life!

What Ponpu is not so great at is variety. There are a handful of different types of breakable obstacles in the levels, and even fewer types of enemies. Each of the six worlds has a different theme; things like Caves, Computer Labs, and Lagoons. But for the most part these are all skin swaps on the same elements. You smash things with your bombs, running out of the way to avoid them bouncing off the walls back at you, and try to kill enemies before they get to you. The different worlds and themes end up playing largely the same just with increased difficulty. I’m not necessarily saying that this is a knock on the game. But if you aren’t really into these mechanics or really taken with the art style, it can be repetitive.

There are two different saving graces for the campaign: The length and the bosses. The game does get difficult, and in my run I found myself having to redo levels several times, but ultimately, it’s only 18 levels that are roughly 10 minutes each assuming you complete it on a single run. Where the game gets interesting is in the boss battles. Each opens to a large rectangular room and you have to learn the bosses pattern and figure out how to exploit it. The easiest comparison most might make is Dark Souls, but this is more in the old tradition of the top down Legend of Zelda games and the like. These fights are probably the thing I enjoyed the most about Ponpu.

The repetitive nature of the single-player might not be the hold back for people it normally would be though, as Ponpu has an emphasis on multiplayer. Three of the four options on the main menu are for the different multiplayer mode. There’s Coin Collector, Paint Battle, and Deathmatch. As one can imagine these involve up to four players running around one of a number of stages sliding egg bombs towards each other. 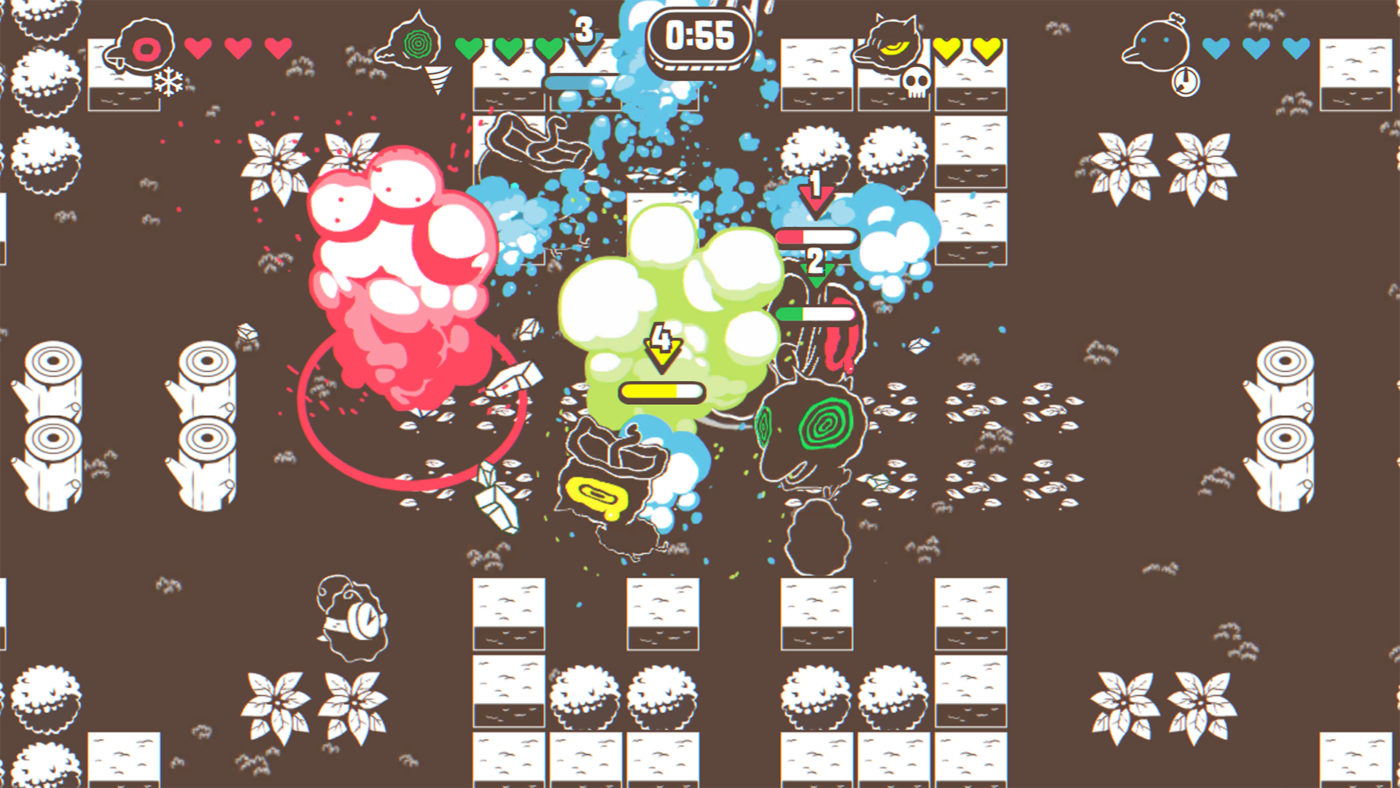 Multiplayer can at times look like a high-five party at The Color Run.

The rules for each mode are what you would expect. Sliding bombs in Paint Battle causes them to paint the ground your color and whoever has the highest percentage of the map their color… well, you get the idea. In my time with the game I was not able to find an online match. Granted I was playing on an Xbox One so I imagine that players on a PC or PS4 might not have the same issue. It wasn’t a big deal though, as Ponpu’s multiplayer is fully playable in local play against humans as well as the option to play against bots. The multiplayer is fun and chaotic. It’s the same mechanics as single player, but it’s good for some fun. I imagine especially so to play with people who don’t normally play a lot of games or with kids.

Ultimately, I would say that Ponpu is a good game, if not perhaps not a great or superior one. It’s something I would recommend if you need a palate cleanser or something that isn’t complex. If you like this type of combination of old school mechanics and modern art style I’d say you ought to give it a try. And if nothing else, it’s a nice quick game that seems perfect for an adult with a job and responsibilities.  I’ll say this, I’m tempted to reach back into Purple Tree Studio’s back catalogue. Here’s hoping they get more opportunities to make original content.

A Ponpu review code was provided by the publisher. Game reviewed on Xbox One S. Click HERE to read SP1st and MP1st’s review and scoring policy. Ponpu is now available on all platforms.