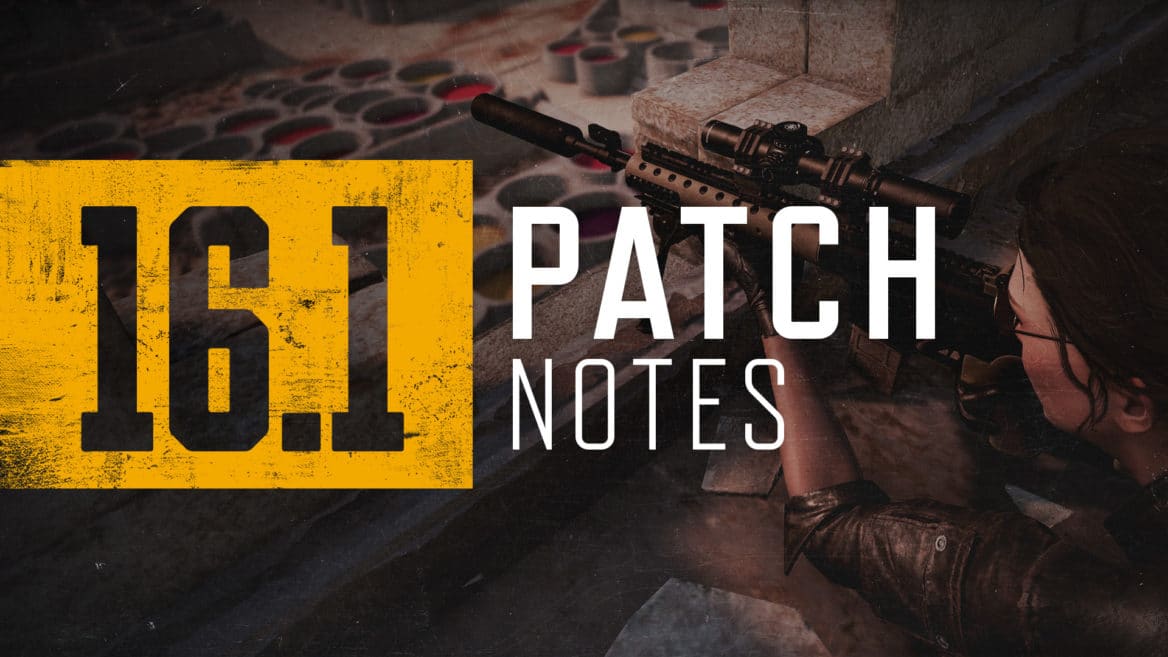 PUBG Corp. has released PUBG update 1.97, which is for the big Update 16.1 patch! This brings in new features, weapon balance changes and loads more. Read on for the PUBG February 23 patch notes below (February 24 for ertain people in the world).

Squad-FPP for Ranked mode on Console will now be available alongside the default Squad-TPP queue in NA and EU regions.

This update has been made based on our Console players’ voices, and we’ll continue to monitor the matchmaking of both queues throughout Season 16 to determine their sustainability and possibly make changes if necessary.

※ PLEASE KEEP IN MIND THAT THE FEATURES AND UPDATES WE PROVIDE BELOW MAY BE MODIFIED OR EVEN POSSIBLY REMOVED DUE TO REASONS SUCH AS BUGS, IN-GAME ISSUES, AND/OR COMMUNITY FEEDBACK. WE WILL UPDATE OUR PLAYERS IF SUCH CHANGES OCCUR.

We’re back with another weapon balance in this update to provide each weapon type a chance to shine in tactical battles and to prevent scenarios where players are all holstering the identical, overperforming weapon.

After we toned down M416’s reload time, base damage, initial bullet speed, and damage drop-off range in Update 7.2 due to the M416 being the most powerful AR and one of the top performing guns in the whole game, we noticed our players were gradually dropping the M416 for stronger ARs such as the Beryl M762. However, despite Beryl M762’s several nerfs in past updates, the weapon continues to show strong in-game performance. Additionally, out of all the DMRs, we’ve noticed the SLR was being favored due to its powerful damage – therefore, players’ options in battles seemed to be narrowed down to the Beryl M762 and the SLR.

Yet, we didn’t want to stress our players out more by nerfing well-used weapons, so instead we’ve decided to not only bring M416’s stats back up, but we also buffed the hard-hitting, high-velocity Mk12 while having it spawn in other maps to prompt more frequent 5.56mm ammo usage among DMRs.

※ Damage drop-off range: The distance at which the weapon’s damage starts to decrease from its maximum damage percentage.

We heard and are aware of our players’ thoughts on our past weapon balancing on SMGs, Shotguns, etc., but the reason as to why it is difficult to actively readjust in-game balancing is due to the requirement of using several months of cumulative data as a foundation to potential changes. Therefore, we will continue tracking our players’ feedback and data to bring healthier balances to the game.

As the winter season melts away, we’ll be saying goodbye to Vikendi for a while and welcoming Karakin back to normal matches this season.

A new Ranked season starts with this update. But before you dive right into Season 16, check the Season 15 reward list below to see what rewards you’ll be receiving based on the final Tier you held in the previous season.

PUBG Down on Consoles This February 24 for Planned Maintenance

War Thunder Update 4.13 Patch Notes; Out for Changes and Fixes This Feb. 24