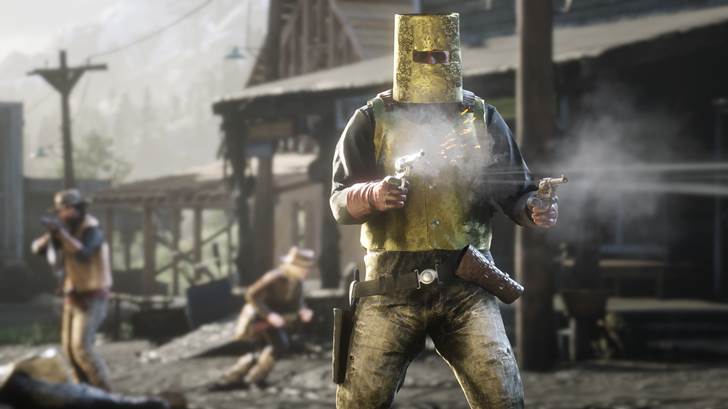 In case you didn’t know, a Red Dead Online update was rolled out yesterday that brought in new items, and a few bug fixes, and something not welcome, a change in how players earn resources within the game.

It seems some Rockstar has drastically reduced how players earn money in the game, as players have noticed that three-star pelts that dropped from one-star animals under certain conditions was removed completely.

In reality, one of the two new weapons is now listed as coming soon, as well as some of the new clothing options. Emotes are now purchasable for $100+ or gold bars (Boins). It’s clear Rockstar wants players to spend money on their premium currency because hunting activities which were already low paying have been cut in half, so these weapons and cosmetics are effectively 2x as costly for players who hunt for their income.

The Evans Repeater was listed as part of this patch but is now “coming soon” even though one of the new daily assignments requires getting kills with it. The repeater appears to be an online only addition as it does not appear at all in single player stores. The other gun, the “rare shotgun” is a double barrel which is actually worse than the normal double barrel when ungraded.

New activities are bugged and unavailable , and the only bug fixes made in this patch appear to have been ones that allowed players to make money too quickly. While horses still reset to bond level 1 and beard styles are not selectable, Rockstar targeted three star pelts dropping from one star animals under certain conditions and using animal carcasses to bait finish was removed completely.

TLDR: they are trying to kill the game

The sentiment you see above isn’t a lone case as other users have chimed in and have spoken out regarding Rockstar Games’ “cash grab.” Here’s what AgentWashintub1 had to say about it:

Red Dead Redemption’s original multiplayer was fun because it was surprising. Nobody really expected it to have much meat on the bones but it was packed with fun activities and there were plenty of opportunities for players to create their own fun. And it was still monetised but in a way that offered something significant for your money, new skins, weapons and modes.

RDR2 Online is a blatant cynical cash grab designed to force grinding or force the money out of player’s wallets with very little room for player driven antics. Even it’s competitive modes leave a lot to be desired when the grind for the guns and gear necessary to play competitively seems designed to force players to pay more money. Say what you want for GTA Online but at least you don’t have to grind for several hours to be able to afford basic clothing, weaponry and vehicles. Sure you’ll be playing a while to afford the high end stuff but at least there’s plenty you can take part in without it.

Of course, any conversation regarding Red Dead Online microtransactions and whatnot wont be complete without touching on GTA Online.

If you want to read more stuff about it, check here.

Yep, this is not good, no? Will Rockstar change it back to how it was once? Or maybe give players a bone? I doubt it given how GTA Online is now, but one can hope.

Have you tried Red Dead Online after the latest patch? What’s your take on this so far?