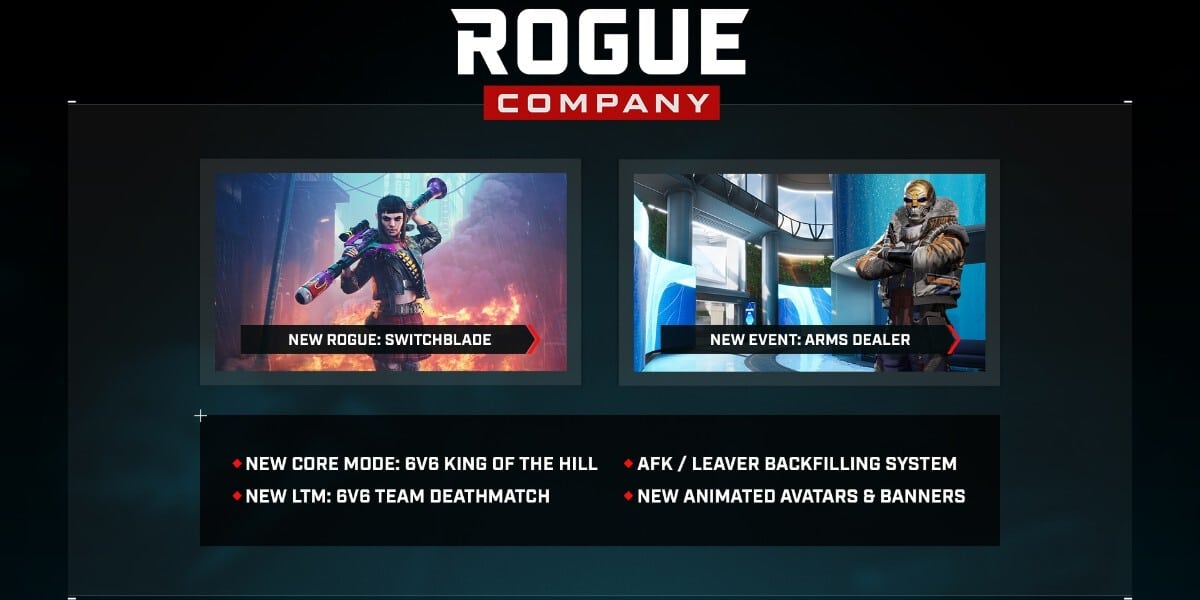 First Watch Games has released the Rogue Company update 1.62 July 6 patch, or also known as the “Switchblade” update! This brings a new rogue into the roster in Switchblade, a bunch of gameplay-related changes and more.

Being forced on the run from a young age, Switchblade never found a place to call home.

Some say she’s a drifter. Others? A criminal.

But to Rogue Company, she’s the right person for the job. pic.twitter.com/7roqB6i1EK

NEW ROGUE: SWITCHBLADE
From a young age, Switchblade’s been on the run and doesn’t know why. Everyone she gets close to ends up dead. Signing up with Rogue Company is a temporary thing as the Director promised her if she joined, the team would find out who’s made her life a living hell. Switchblade doesn’t believe in promises, but it feels nice to pretend that she does.

Chaos Launcher: Equip a launcher that fires a Napalm Warhead. On impact, the warhead deals damage and releases a cluster of napalm in the area.

Fight and Flight: Gain increased movement speed after using your ability or gadgets.

King of the Hill has proven extremely popular with the community and as a result, we believe it should become one of our Core modes. While not as popular as other modes, we still love Extraction, and even though 6v6 KOTH will replace it, look for it to rotate in as a Limited Time Mode in the future.

The Arms Dealer Event is back and better than ever! Complete missions, earn credits, and exchange them for shipments with unique rewards!

Players will begin by selecting a mission from the list available. Once a player completes it, they will receive credits that can be exchanged for shipments. Any unspent credits at the end of the event will be exchanged for Reputation.

Only one mission can be active at any given time, however, progress will not reset if a player switches between them and progress is earned through any available game mode.

There are two types of shipments:

We will be starting phase 1 of our efforts to address the AFK and leaver problem with the Switchblade update. During phase 1, when a player deserts a match due to being AFK or quitting early, they will be replaced by a bot. The bot’s difficulty will scale based on the skill of the players inside the match to ensure a quality experience. If the deserter reconnects to the match, they will replace the bot.

Phase 2 is a larger effort but we’re excited to share that we’re working on a “Player Backfill System.” We will have more details on that shortly!

The HRM-30KS struggles against enemies who have access to armor. By increasing the headshot damage from 40 to 42, the HRM-30KS will now down armored players with three shots instead of four. This maintains the weapon’s identity of being a slow-firing, heavy-hitting assault rifle, and makes it a more favorable choice.

The Nightshade is an assault rifle and SMG hybrid which is designed to have the fastest body Time to Kill of all assault rifles. Unfortunately, the Nightshade struggles when going against enemies who have access to armor. By increasing the body damage from 17 to 18, the weapon will now armored players with seven shots instead of eight.

The Mamba has a difficult time competing against other weapons inside of the DMR category. By increasing both the Headshot and Bodyshot Damage, we’re creating a more consistent experience across all damage ranges.

After the Time to Kill reversion, the MX-R was left in a weakened state. The MX-R was being outclassed by the majority of Assault Rifles at all ranges. By increasing the Fire Rate, we’ve found the MX-R to return to its former glory.

The A3 Salvo has been the weakest pistol in the game and a constant pain point for our players. Due to community feedback, we’ve decided to buff this weapon across the board.

Shotguns are underperforming. We’ve decided to increase the range on some of our shotguns to see if that puts them in a more favorable spot.

The 24S will be receiving a meaningful Level 3 Upgrade as well as getting a small body damage boost. By increasing the body damage to 16, the 24S will need one less shot to down enemies who have armor.

Snipers are getting a Tier 3 headshot damage increase to help counter Rogues such as Chaac whose ability gives him bonus health.

A major request from the community was for Chaac to have access to the Berserker perk. We agree with the community’s sentiment and have made the change!

Sadly Dima is underperforming. We’ve seen that Dima’s mirv launcher is easy for players to avoid and Nimble Hands is rarely purchased on him. With that said, we’ve decided to reduce the fuse time of the MIRV Launcher and Dima will now have access to Stalker.

We wanted to lean into the playmaking potential of Fixer’s kit by giving him Replenish. This was a wonderful community request that will reward Fixer for hitting headshots with the Tyr.”

There isn’t a major difference between having an “okay” game with Kestrel and a “great” game due to her passive ability. Kestrel is able to freely buy any, and sometimes all, items from the Item Shop. We will be reducing the amount of bonus cash she receives to combat that issue.

Lancer is designed to be our Rogue who excels at breaking positional timers and flanking the enemy team. Unfortunately, Lancer is having a hard time executing flanks in Demolition. By increasing the time she has in her ability, Lancer is able to cover more ground.

Since the release of Rogue Company, Ronin’s passive has always been viewed as weaker than the rest of the lineup. We’ve decided to lean into the ethos of her passive ability and make her immune to reveals as well as enemy radar detection.

Seeker will be receiving a couple of buffs to increase his overall desirability and allow him to compete in respawn game modes. We’ve decided to reduce the cooldown on his ability while simultaneously increasing the reveal radius of his arrow. We’ve also increased his passive ability to provide more bonus damage to ensure the arrow will down enemies with armor.

Talon’s Radar Dart will be receiving a diameter buff. This buff allows Talon to have better visibility over a lot of key choke points throughout our maps.

Since the dawn of time Rogue Company players have wanted Trench’s Barbed Wire to deal damage to their opposition. After much deliberation and testing, we finally agree with you all.

Adrenaline Shot is overperforming for its current cost. We will be increasing the cost of the gadget slightly.

The Bounce Grenade needs a small adjustment to help it compete with other lethal gadgets.