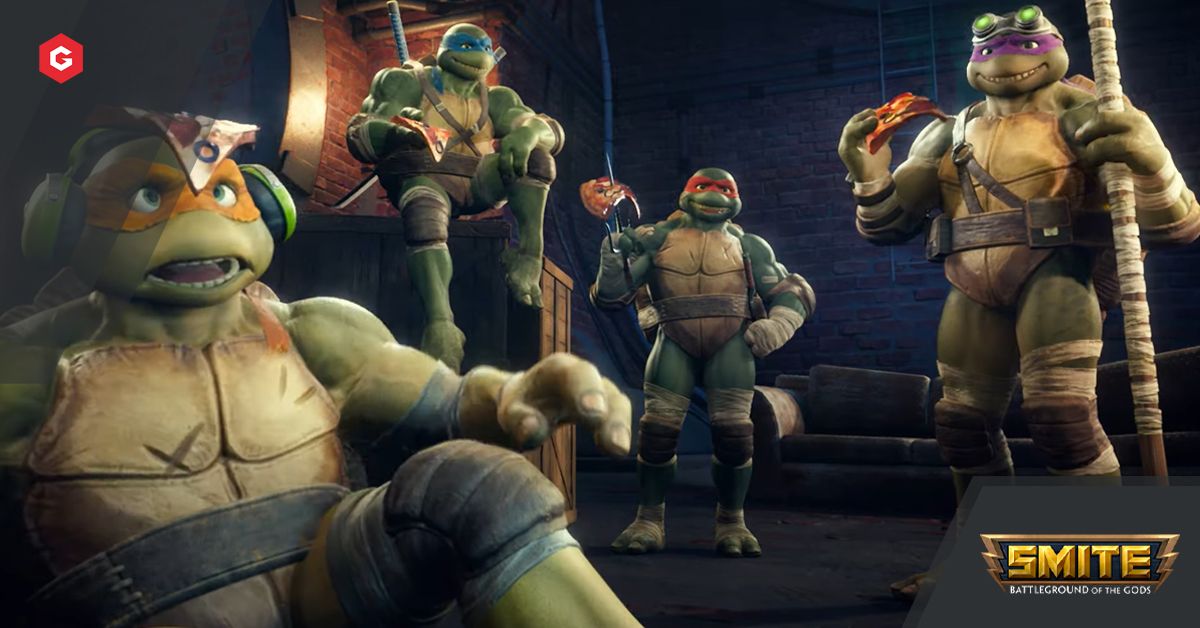 Cowabunga! Hi-Rez Studios has released the SMITE update 11.60 November 3 patch, and it brings the Teenage Mutant Ninja Turtles (TMNT) Battle Pass into the game and more! Head on below for the Battle Pass contents, changes and more.

This is called the SMITE patch 7.11 version by Hi-Rez, but console gamers will see this as the 11.60 title update.

Early Surrender was added to SMITE as a quality of life feature, so that in cases where—whether due to user’s wi-fi, their ISP, or the SMITE servers—a teammate was gone long enough that it wasn’t fair to play it out, all players in the match could get into a healthier game as quickly as possible. Unfortunately, some players have been abusing this to dodge what they perceived to be losing matches based on pre-10m gameplay. While the regrettable truth is that the harsher we make the DC penalty to prevent this abuse, the harsher the effects on those players who were actually DC’d, it’s clear that this abuse case has caused too much frustration to leave unchanged. Hopefully this will put a stop to that intentional misuse, but we will continue to keep an eye on it, and in the meantime if you feel like a player is intentionally abusing the system, please report them and our support team will investigate and take punitive action.

Updated many descriptions for better clarity and consistency

Clarified a type of CC in SMITE – Vortex

MAGIC SHELL UPGRADE
For many relics, the effect of stacking multiple relics doesn’t provide additional benefit; and this is especially true of buffs for teammates. The block stacks stacking while the shield did not seems unintuitive and difficult for enemy teams to keep track of. Block Stacks from Upgraded Shell will no longer stack.

GUARDIANS BLESSING
With a new Season on the horizon and many items being adjusted, we are looking to round out a few smaller issues before the World Championships. The first step we are taking is a small protections buff to the early game for Supports. Duo lane can be punishing, and we want Supports to feel sufficiently tanky. This obviously doesn’t help them from being shredded by high pen builds in the late game but it does help Supports progress through a match more safely, which should give them an edge as the game goes on.

STAFF OF MYRDDIN
The legendary Arthurian item for mages received a lot of hype on release, but has since fallen off. Its special effect can be difficult to use optimally, and its stats just don’t feel like they fit the cost. We are making this item slightly more affordable to make it a more viable Mage build pickup.

NOX
The goddess of night is a popular topic for balance discussion. Nox’s kit focuses on all-in gameplay and heavy lockdown, making her a rather unique mage. Her high amount of CC has often been a limiting factor for her, as buffing overall damage or ease of use on the kit would likely cause frustrations. After much deliberation and statistical review, we are looking to bolster Nox’s laning potential as a way of bringing the goddess into a more competitive spot. Her Shadow Lock ability will now be able to deal a small amount of damage to minions as it passes through them. This gives Nox more efficient lane clear, but more importantly gives her more decisions to make in the laning phase on how to pressure her opponents.

ATHENA
By popular community demand, the goddess of wisdom will have a cleaving basic attack in her hit chain. Athena’s balance has been in a great spot over the years, where she never felt oppressive but always felt relevant. However, she has slowly dropped off over time and now we can feel comfortable applying some buffs. This change should help her early lane clear or her jungle flex potential, and will feel more fitting for the animation of the attack.

BACCHUS
When you play Bacchus you’re here to party. Unfortunately, chug doesn’t feel great to rank up and the buff from it feels lackluster. We want Bacchus players to chug right before they engage in combat, so we are adding an extra Magical Power buff to the effect. This should have our big boy swinging hard on his enemies like the good old days.

BELLONA
The goddess of war is notoriously tricky to buff, being able to quickly overtake a meta when even slightly too strong. With this in mind we looked to make changes to Bellona to improve her flexibility. Her mana costs often interfere with her ability to swap to the right weapon for the correct situation. This change will help her box without pushing her to be too intense.

CHAAC
What do you give the god who seemingly has it all but can’t quite break into the meta? When looking at Chaac’s kit on paper we see strong damage output, self sustain, debuffing zone control, and impactful CC. Chaac is already putting up some decent casual stats so we are being measured with our buffs. In this pass we are making the self buff aspect of his Torrent much more relevant. Many players overlook this feature of his kit entirely, and this should help him stay alive in extended fights. We will be keeping a close eye on this god as we see constant community outcry for him to make more competitive appearances.

DA JI
This change is a long time coming. It was discussed with Olympians at the Season 6 Summit, but Da Ji’s meta position was too high for a change. Currently, this ability has some very interesting per rank scaling that causes it to feel bad in the early game. We are increasing the rank 1 damage considerably, while decreasing the per rank increase and the late game base damage. This change is intended to be a buff so that base damage loss is being compensated with a Physical Scaling Buff.

ISIS
The goddess of magic was a force to be reckoned with earlier this year, which led to a long series of nerfs. With other meta and item changes we can now clearly see that those nerfs were too much, and we are slowly reverting them. Wing Gust needs a high top end damage to be worth the channel time and positional risk, so we are bringing that back in this update.

JORMUNGANDR
Lately the Danger noodle is too much noodle, not enough danger. Jormungandr had a huge arrival on the battleground, causing a lot of disruption to the meta and dominating Solo Lane for months. Considerable nerfs were applied over time and now Jorm is clearly looking underpowered. His damage potential tends to be a frustration point so we are looking to buff his utility instead. Submerge is getting a lower cooldown and stronger CC to make sure Jorm can impact a fight in more ways than just dealing damage.

MEDUSA
Our quest continues to bring Medusa up to a point of competitive viability. Acid Spray doesn’t rank up in damage very well, but Medusa needs to tank this first anyway. We are increasing the base damage per rank to make sure Medusa can clear waves effectively as she transitions from the early game to mid game.

MULAN
After a Heroic launch, Mulan has settled in nicely into the ranks of the SMITE gods. She feels viable without being frustrating, and brings fast paced combat and flexibility to the Warrior class. Her Ultimate, however, has a strangely long cooldown for the effects, and is being toned down slightly to better fit within the scope.

NEITH
The new backflip timing is feeling great, but we have received feedback that the mana cost is rather archaic and punishing. We are bringing this down to match Neith’s more modern gameplay goals.

ODIN
The Allfather was another strong rework that led to slight overnerfing. We are reverting one of those nerfs to Gungnir’s Might’s base damage which should help his early clear and solo lane potential. Bastet, who was reworked at the same time, is also being considered for more significant changes in the future.

TERRA
The Earth Mother is continuing her transformation from true support to bruiser. Terra was originally thought of as a more protective Guardian, but as her pro gameplay and balance progressed we started to see her played more aggressively and even in Solo Lane. We are adding cleave attacks to all of her punches only when her passive is active. This adds a unique management component to her deployables, and bolsters her early game which tends to be awkward until she has all of her abilities ranked for shatter combos.

VULCAN
A buff shouldn’t cost an arm and a leg. Well Vulcan is missing those limbs and there isn’t much we can do about that, but we can buff his Ultimate. This ability has insane long range snipe potential, but feels far too weak when used at closer ranges. We are increasing the floor on the damage curve to make this ability more useful in a wider range of situations.

XBALANQUE
The Mayan hero twin has had some very interesting balance developments over the past season. After some interesting changes in the past Season Xbalanque has settled into the lower end of the Hunter roster. With Branching Bolas and his Ultimate now feeling to be at great spots, we looked at his movement ability. Rising Jaguar used to be a key source of damage in the old days, but has crazy low scaling for today’s standards. We are increasing this damage scaling by a considerable amount to give Xbal more options in combat.

ZHONG KUI
He might not be getting another skin yet but he is getting a buff. Zhong Kui is surprisingly underperforming in a meta where solo lane mages have been quite potent. Zhong is intentionally designed with slightly lower damage traded for tankier stats, but his damage numbers looked surprisingly low in a few places, even for a solo lane mage. We are buffing a base damage and a scaling effect in his kit to bring his damage up across multiple build paths or roles.

SHIELD OF THORNS AND UPGRADE