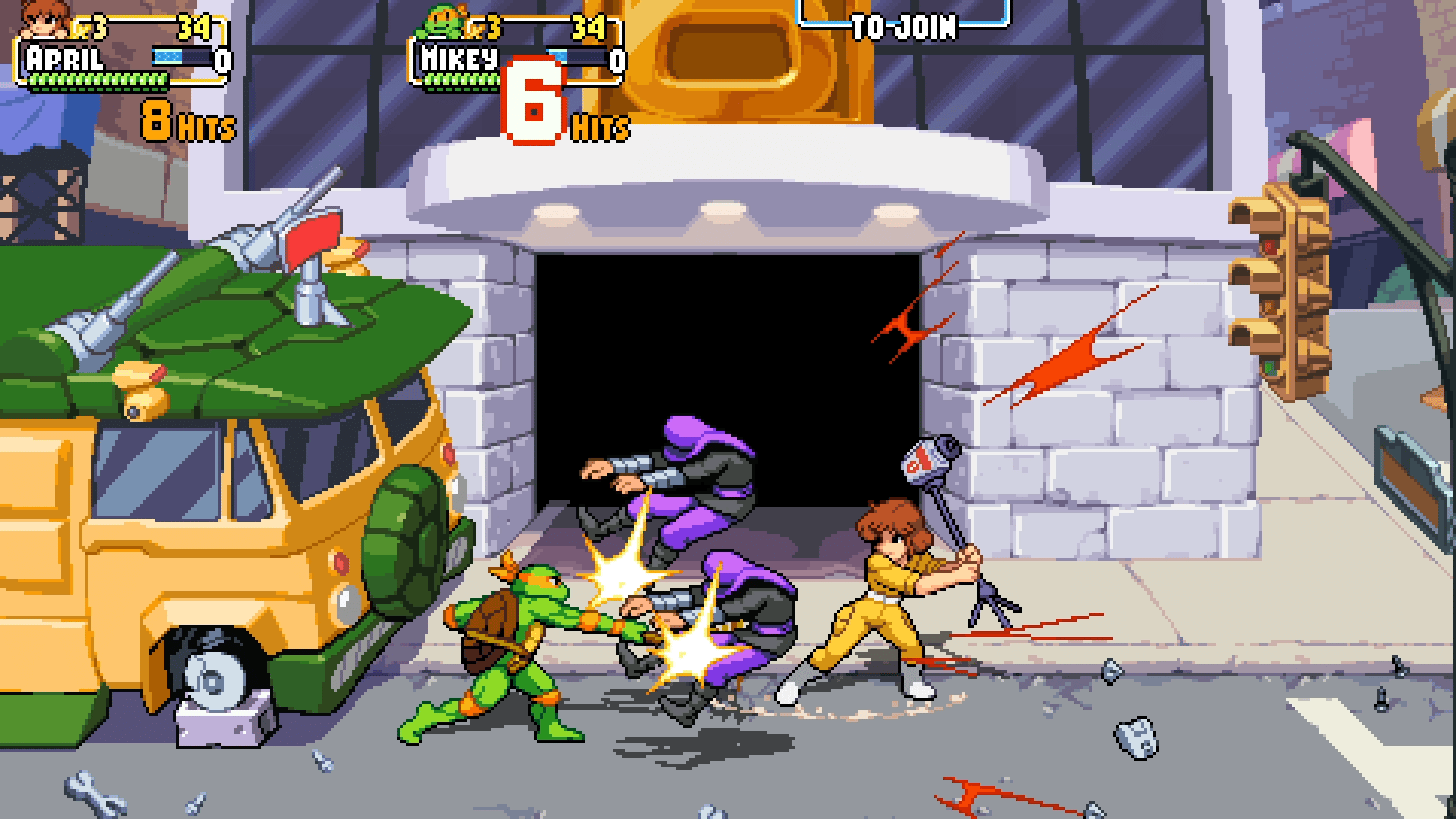 Oh, no! It looks like Shredder and his band of foot ninjas are back once more, wrecking havoc on the good people of New York City. How will we ever stop them? Fear not, citizens, for your favorite four amphibious heroes have returned! That’s right! The Punk Frogs are back and unlike their hard shell counterparts these guys will show no mercy! Will they finally put an end to Shredder’s long fueled quest for revenge? Find out in our Teenage Mutant Ninja Turtle: Shredder’s Revenge review!

It’s hard to believe that it’s been 31 years since the release of TMNT: Turtle in Time. While I never got to experience it at home myself, partially because my brother would hog the NES, I did get the chance to play it at one of the many — now extinct — arcade venues years later. And honestly, after playing, I could understand why my brother was such a hog with the console.

I knew instantly the moment I saw the intro and then hopped on, choosing Raphael as my main, that what I was playing was an absolute hit. The gameplay was so easy to get into, yet so satisfyingly addictive. It had music that I can only describe as being the perfect embodiment of the retro 90s. Not only that, but the visuals perfectly encapsulated that with its rich, vibrant colors, and ahead of its time animations.

The hours that I’ve poured into the arcade version, the absurd amount of coins wasted just so I could beat up some foot clan ninjas, and foil Shredder’s plans, I felt like a hero in my own childish way. I suppose that’s why they call it the golden era; a time when everything seemed so awesome because of how fresh it all was. I would do anything to relive that time and well, it seems that even the folks at Dotemu and Tribute Games understand this, as their latest, TMNT: Shredder’s Revenge oozes in every bit of that nostalgic ’90s era.

I mean honestly, look at it and tell me this isn’t exactly how you remembered (at least in your head) the originals. 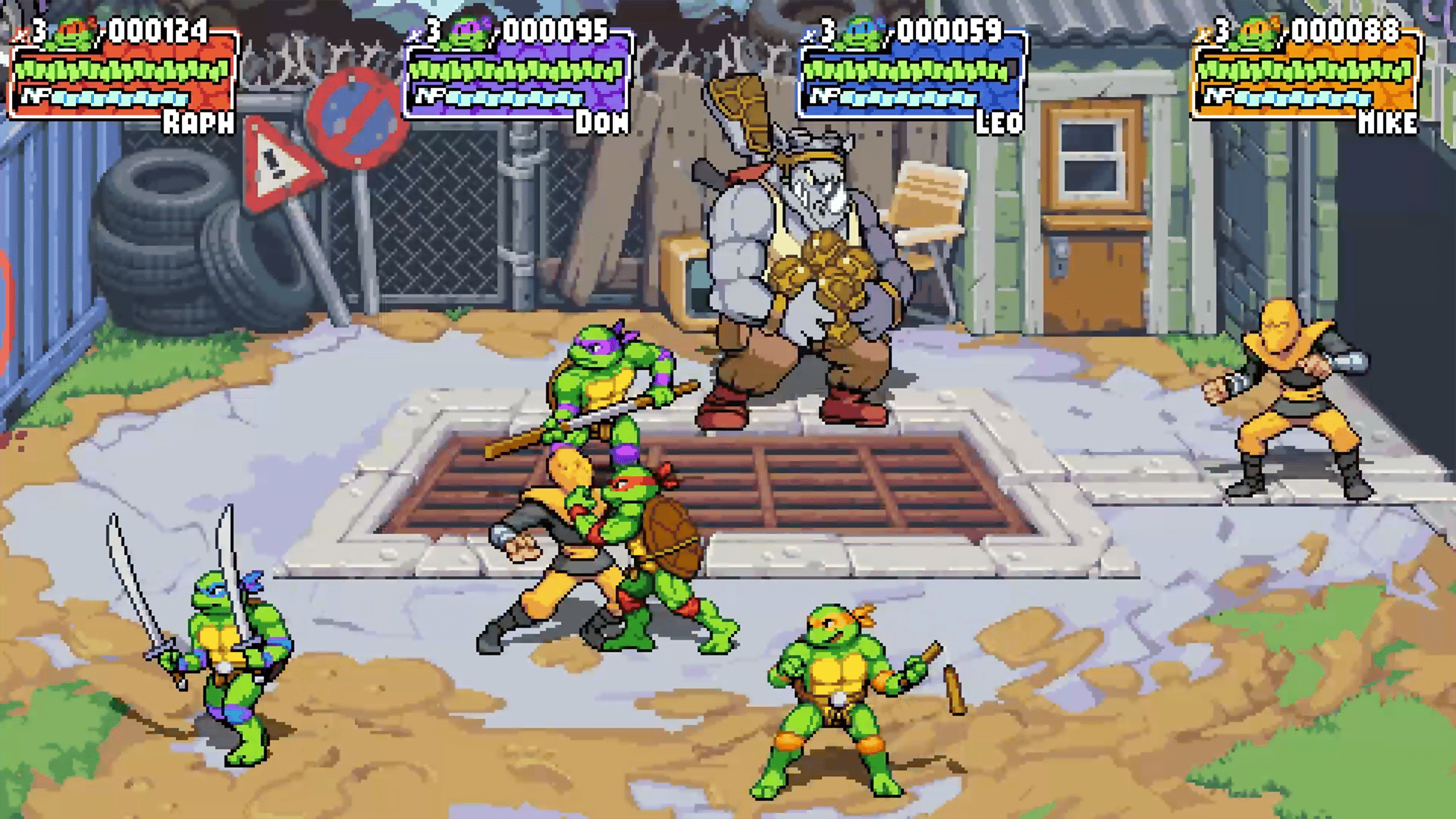 It’s gorgeous! While I know this, in fact, looks a lot better, I can’t help but feel as if this is exactly how it would have looked like if the ’90s series had continued on. Tribute Games even goes the extra mile by ensuring that it has that same blocky look, while also modernizing it with higher details, and complex animations. While I undoubtedly would have loved something closer to the reimagining that Streets of Rage 4 pulled, there’s just something charming with this retro style look that Tribute Games manages to pull off masterfully.

The animations especially are a treat, which I hope don’t go under appreciated. You know the animators at Tribute Games spent hundreds, maybe even thousands of hours, working on them, and I’m glad to see that work pay off in the final product. They’re buttery smooth, and for a game like TMNT where all the characters have a cartoon personality, it’s great being able to see those conveyed in such stylish animations.

That buttery smoothness of course transitions into the combat itself, and although recognizable, the beat ’em up combat offered by Shredder’s Revenge is undoubtedly some of the best the franchise has ever seen.

It’s fluid, and veterans of the old games will feel right at home. That’s not to say that there isn’t anything here for newcomers, and in fact quite the opposite. Like Turtle in Time, Shredder’s Revenge is very accessible to all ages and skill gaps. It’s very easy for anyone to just pick up and be good with it, because of how user friendly the controls and combo system are.

This results in an experience that not only you can enjoy solo, but with family and friends, as not only does Shredder’s Revenge support local play like the originals, but it also supports full online cooperative play, making this one exceptional party experience.

A Modernized Take That Keeps the Spirit Intact

I suppose you’re wondering what else Tribute Games might have done to help modernize TMNT? Well, outside of the visuals, and improved and expanded gameplay, there’s a change to how the arcade and story function. It’s not a drastic one, mind you, but rather than only offer an Arcade mode like in the originals, Shredder’s Revenge features a story mode for those looking to take things at their own pace.

That means that, unlike in the arcades, players will be able to save their progression as they move from one level to another. The presentation is a bit different too, whereas Arcade mode immediately throws you into the next level after completing one, the story brings you to an almost Super Mario Bros.-like map of New York City that you can move between levels on. That means if you wanted, you could replay any mission you want without having to go through the other ones to get to it. 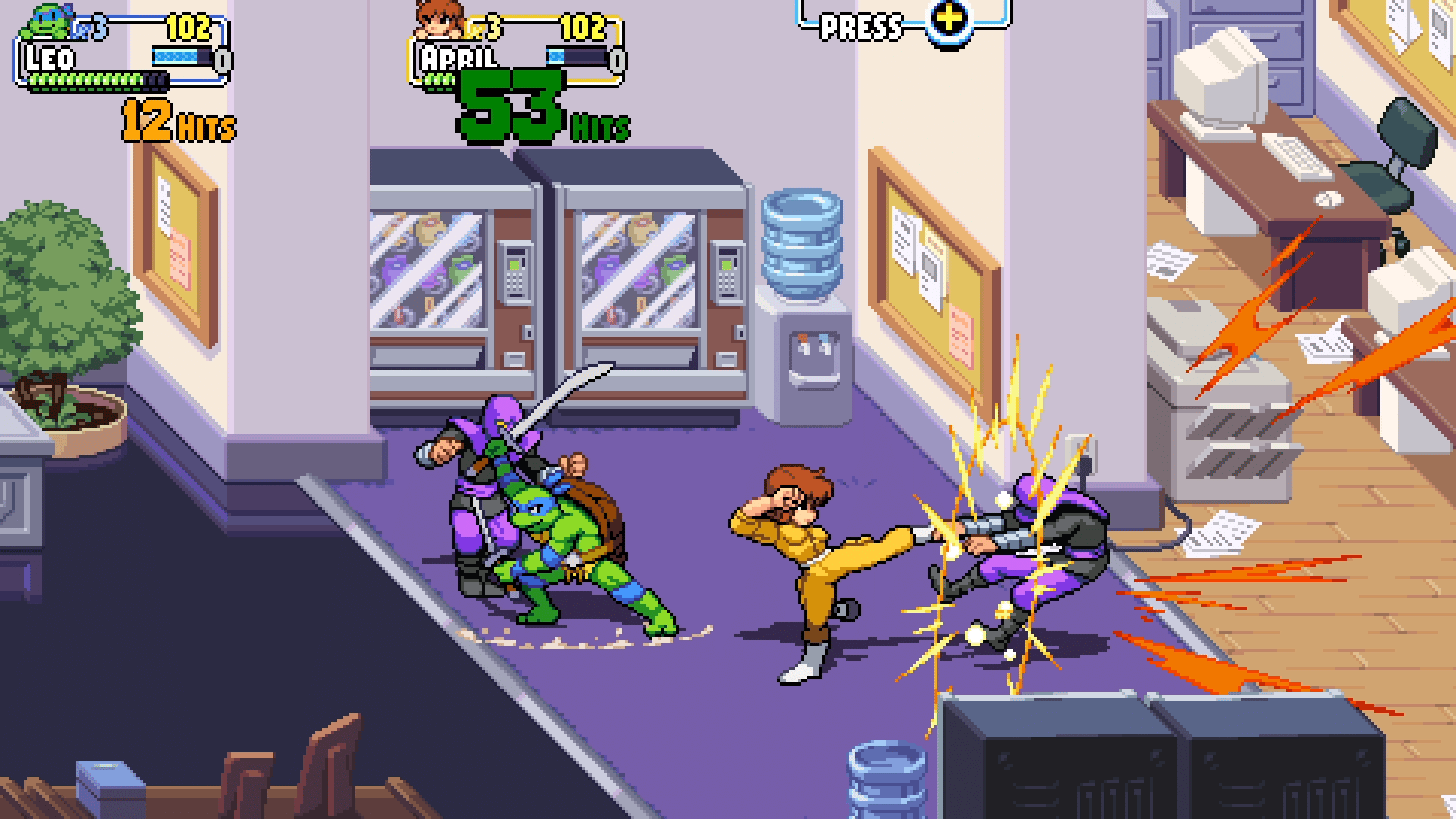 Additionally, Story mode offers more gameplay mechanics in the form of a leveling system. It’s not anything crazy, usually tied to increasing health and super meter, but there are some exclusive abilities to be unlocked. It also features NPCs that offer side quests, as well as missions for during levels, but again, nothing crazy as they mostly revolve around finding hidden items such as a diary, and even some familiar surprise cameos.

But of course, if you are wanting to experience Shredder’s Revenge as close to the original releases, you could always play through Arcade mode. It has a higher level of difficulty, and guts away all the story features such as saving, upgrading, and even the side missions.

Whatever mode you prefer, you’ll find that there’s an endless amount of fun to be had, be it alone, or with a group of friends.

You know, from the very moment I saw Teenage Mutants Ninja Turtle: Shredder’s Revenge I knew instantly that the game was going to be a hit. It does exactly what I was hoping it would do, delivering on what only its 90’s counterparts have been able to deliver. Sheer fun, coupled with outright gorgeous visuals that would make any fan happy. The child in me is screaming with joy, while the adult in me is applauding Tribute Games and Dotemu on their incredible work. This will be one for the ages, a timeless classic that I’ll be going back to for many years to come.