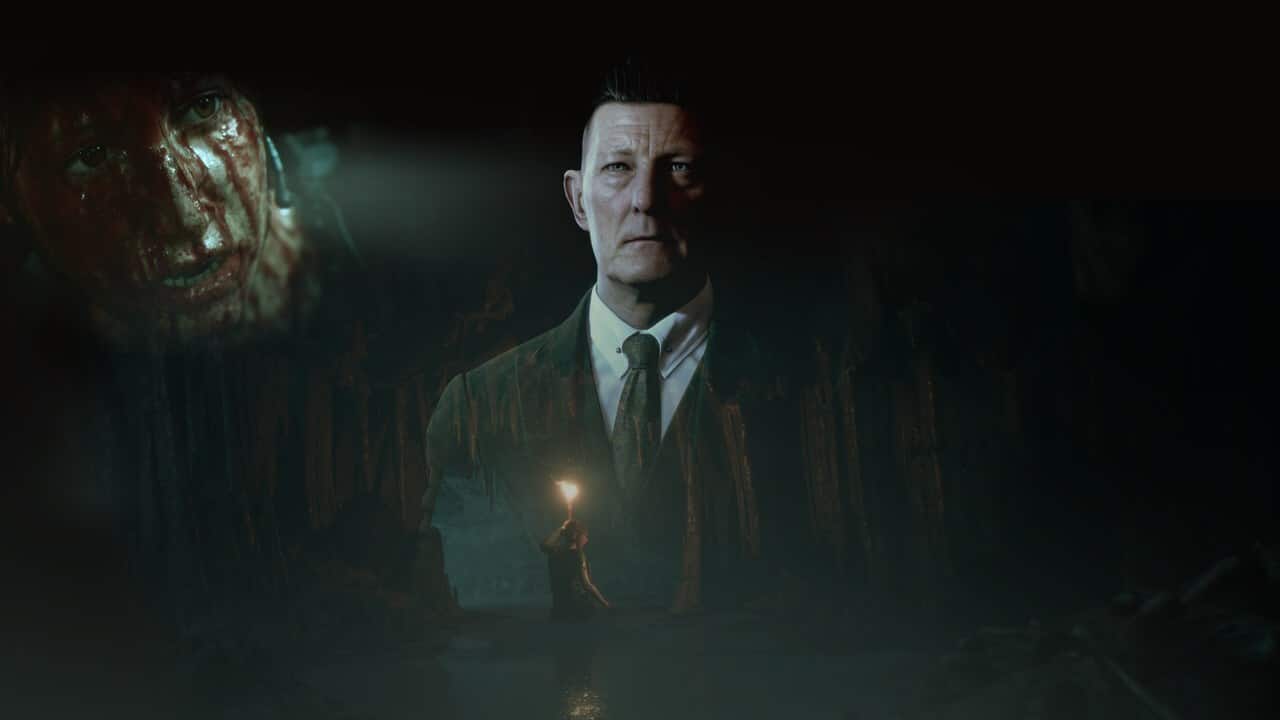 The Dark Pictures Anthology continues with House of Ashes! Once again, horror vets Supermassive Games is at the helm to deliver a cinematic scare-fest, though this time, it involves soldiers, a CIA agent, and other characters involved in military operations. Is this a house you want to live in, or does it falter under its own weight? Read on for our House of Ashes revew!

A House of Ash

The year is 2003, and the United States of America is in the midst of an all-out war with Iraq. Under the pretense that the nation is hiding chemical weapons of mass destruction, a group of soldiers are tasked with raiding a small remote cliff-side town located in the Zagros Mountains in Iran. However, upon arrival, the team quickly learns that the supplied intel was wrong, and are soon ambushed by the opposing forces. What was once a peaceful town is turned into a warzone, with the blood of innocents being spilled in the crossfire.

Coincidentally, in all the chaos an earthquake hits, opening a number of sinkholes in which both forces fall into. Trapped in an ancient temple beneath the surface, it’s a battle of survival, as the two forces fend off against each other. It’s not soon long after that both sides begin to realize that there is a far more sinister threat lurking in the shadows. Demonic creatures ripped out of the pages of H.P. Lovecraft begin hunting the group down, picking them off one by one. With numbers dwindling fast, the group must decide to set their differences aside, or face a fate that is far worse than death.

Like previous Dark Pictures games, House of Ashes is all about player choice, and the repercussions that are tied to them. You’ll be given multiple instances where you’ll need to decide what a character’s actions will be. Some are small, some big, some innocent, while others malicious. Whatever you decide, It’ll all impact the way the story is told. 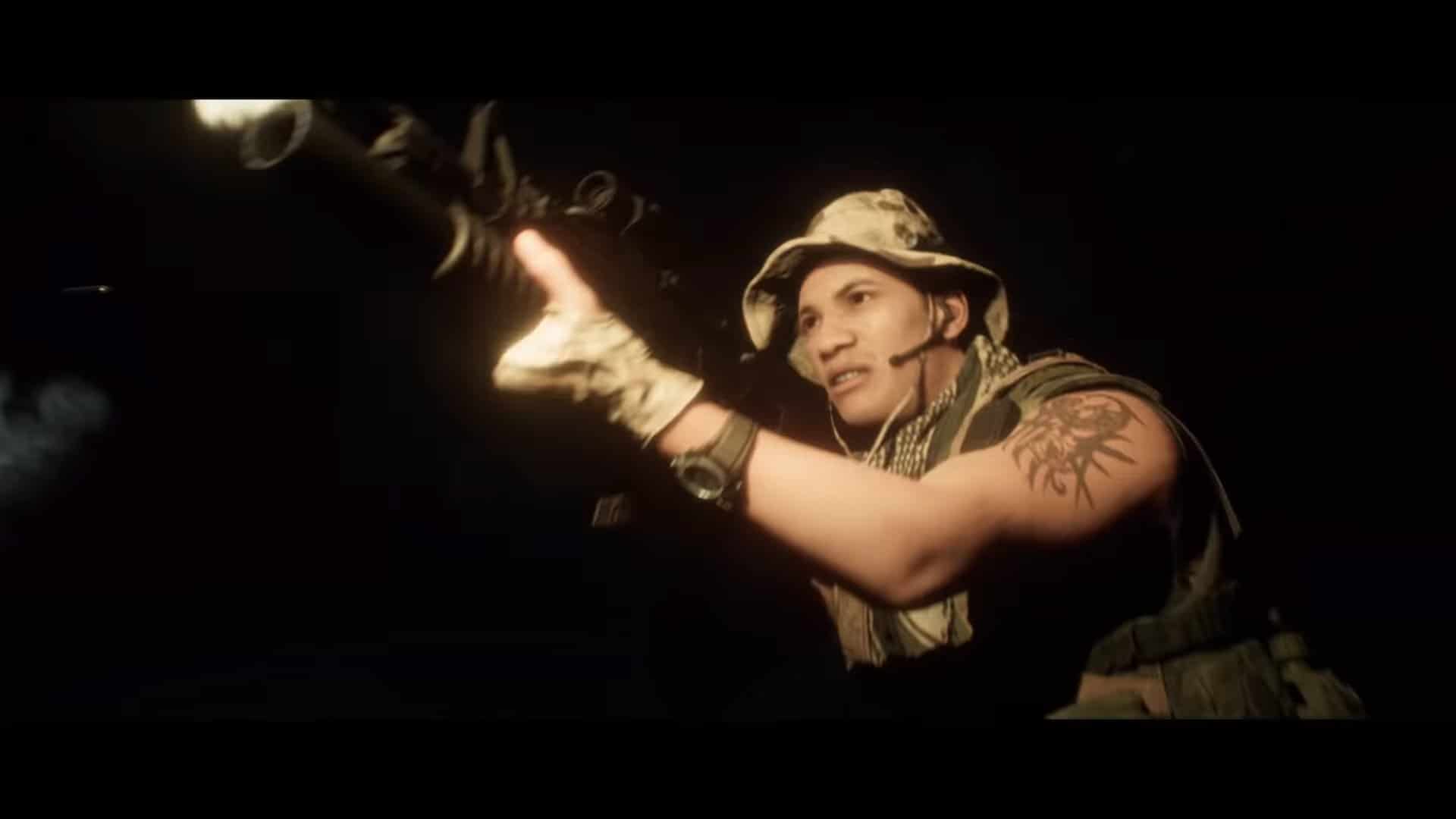 Not a new concept, as many will recognize House of Ashes as a interactive story — a genre that Super Massive have stuck to since their first release, Until Dawn. However, it’s how, after four games, that the studio is still able to manage to craft these stories into a wonderfully, woven tale that truly feel like a player’s decision matter.

However, unlike the last two Dark Pictures (Man of Medan, and Little Hope), House of Ashes blurs the lines of good and bad, and instead offers a morale system more akin to the butterfly effect found in Until Dawn. This means, that while you may think you’re  making a good or bad decision, the reality of it is that those decisions will play out later in the story in ways you probably didn’t imagine.

Maybe you should’ve been nicer to this character, or maybe not as trustworthy to another. Small choices have big impact, and in some cases, it’s life and death. And although short, fans of the genre and anthology will undoubtedly love what Supermassive has made. Though admittedly, the writing isn’t all that great in some areas, as with some of the character’s acting. It’s very much like a B-movie horror affair…you don’t go into this expecting the acting to be great, but you do hope that it follows through on the horror side.

House of Ashes is a bit of a mixed bag when it comes to its horror. It starts off horrifying because of how little of the monsters you get to see, but as it progresses, that changes as the beast is put front and center. You could say it overstays its welcome, and the whole military cast of characters doesn’t help with their hoorah to ashes kind of attitude. That’s not to say I didn’t enjoy the campaign, but those expecting to see Supermassive return to the glory days of Until Dawn, you may want to keep those expectations in check.

However I will say that House of Ashes does offer an experience tied down to some very tense moments. Some decisions you’ll need to be quick on your feet to make, and as stated, they’re not very black-and-white. There’s always a constant back-and-forth going on between choices because if you’re like me, you always want to make the right one and never lose someone important. 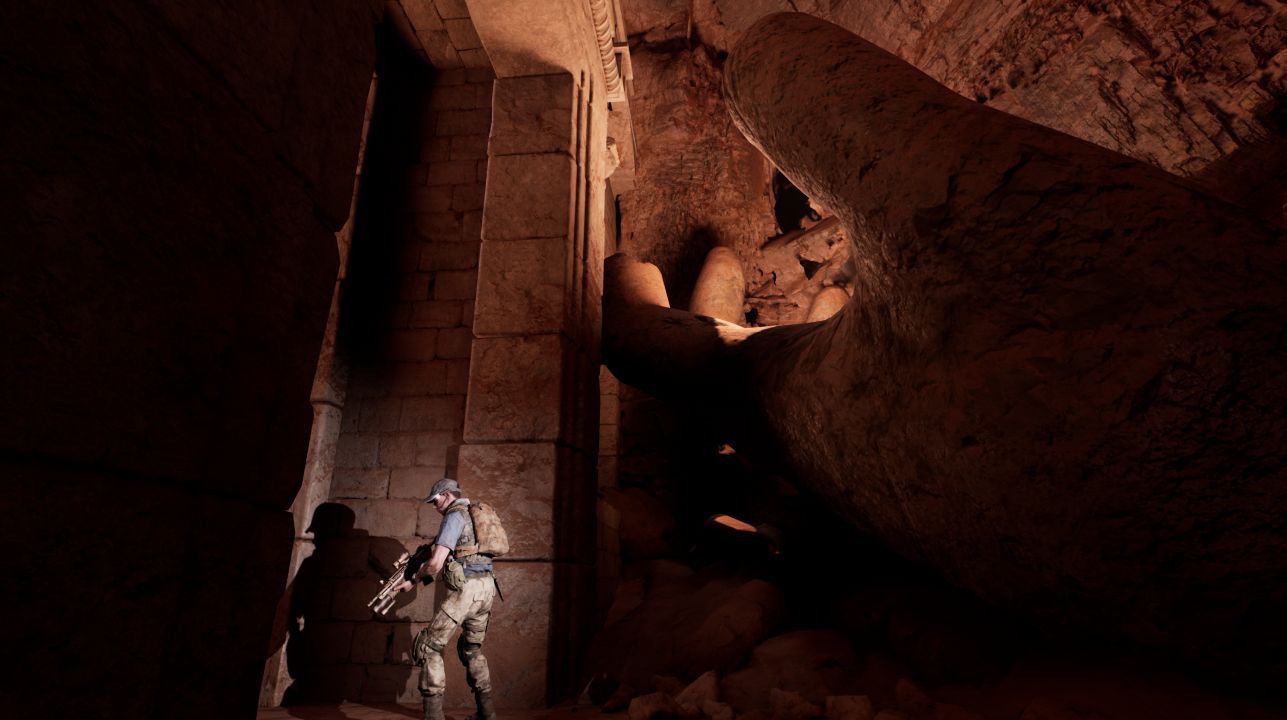 House of Ashes does an incredible job at portraying that constant tension, especially between all the characters. That can mostly be thanked to the stellar cast, lead by Ashley Tisdale (yeah, you know, from High School Musical.) Lots of emotional range felt throughout the campaign, and although I said the writing comes off as a bit B-movie script-ish, I do appreciate that it did feel like the cast were into their roles.

I enjoyed the campaign, even if it wasn’t that scary at all. Well worth a few revisits too, as there are tons of different outcomes to experience.

Now with this being the third iteration in the Dark Pictures (and Supermassive’s fourth title,) you’re probably wondering if the studio has done anything new. Well they have. For starters, the camera is no longer a fixed angle, but instead offers a full 360-degree view. I had my initial concerns, as these types of games usually use the fixed camera for cinematic purposes, but I have to say, the free-range camera really adds a layer of freedom.

Visually speaking, House of Ashes is perhaps the best looking game in the Anthology, in not only in its high details, but also the variety of environments. Speaking of anything more than the temple setting would spoil a lot, but let’s just say be prepared to be astonished by some of the scenes offered. They’re clearly heavily inspired by films like Aliens, and other classic horror films.

And the free-range 360 degree camera helps immensely to show off these environments. The temple for example is filled with close quarters with plenty of places for something to hide. In a fix camera situation you would be expecting some sort of jump scare to happen, it prepares you for those moments better. 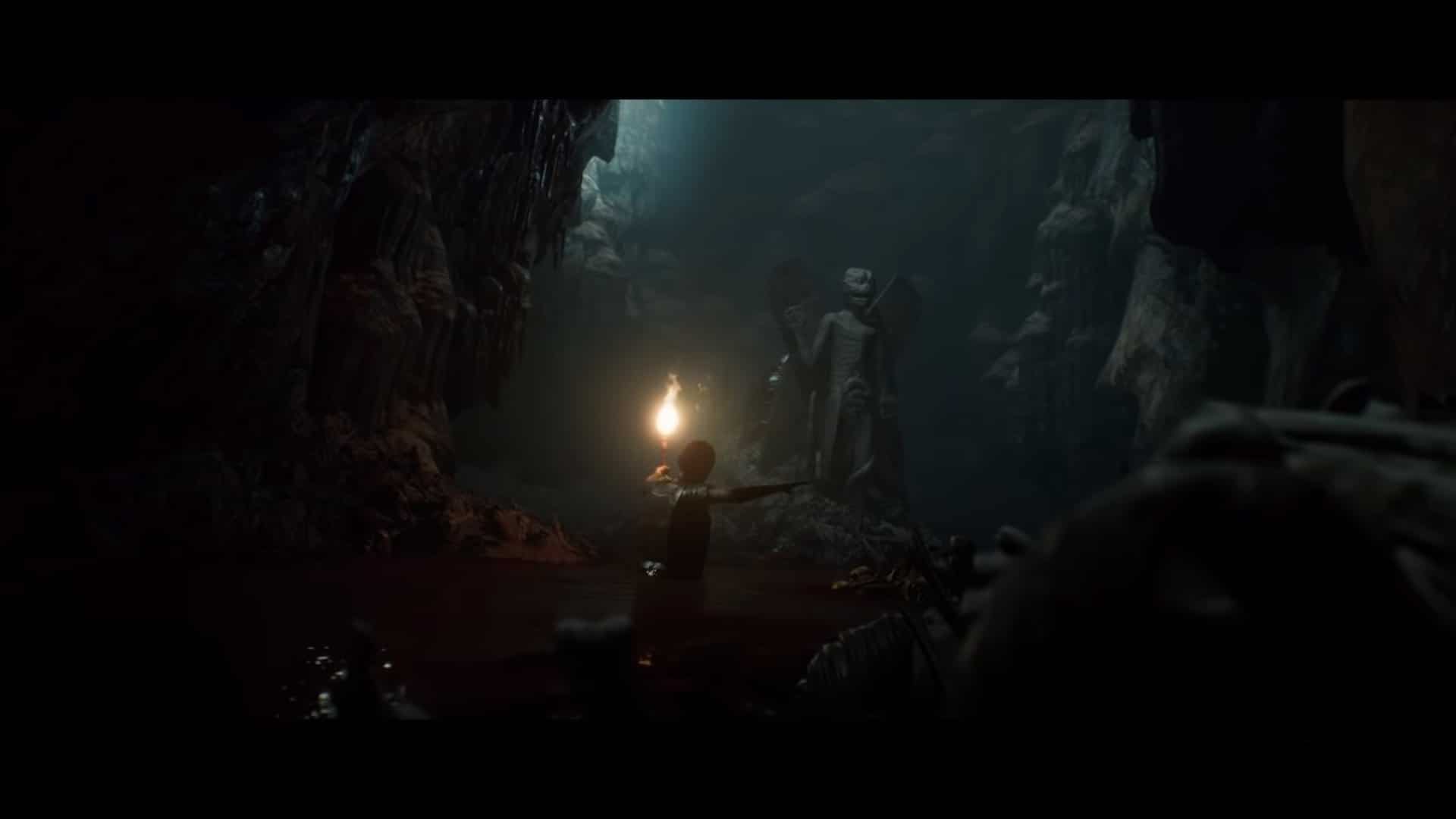 However, with the the camera now fully controllable, you’ll often find yourself in situations where you’ll be walking in near pitch darkness, only to have to stop because you’re unsure if there’s something hiding around a pillar. Chances are there isn’t, but it’s that phycological effect that is so well achieved with the camera and environment. I’m reminded of the scene in the first Halloween movie when Michael Myers suddenly appears out of nowhere in the shadow right behind Jamie Lee Curtis’ character. You knew he was there, you just didn’t know where.

Furthermore, there are now difficulty options which come in the form of Forgiving, Challenging, and Lethal. This is a welcom addition, as personally I have found some instances in the QTE’s (Quick Time Events) to just be too quick. The amount of times I’ve died, or had to restart because I wasn’t quick enough to see where I was supposed to aim and click in some titles is just all too frustrating. Forgiving makes it so you have time to think things over, though if you do want the classic challenges, then the higher levels are there for you.

Then of course there’s the general technical improvements. House of Ashes offers a very polished experience, which is surprising given its a QTE-style game. I mention that because anyone familiar with these types of games are probably used to jittery and frame rate dips during transitions. I’m not sure why that’s a common issue in these kind of games, but in the very least Supermassive appears to have addressed it, as scenes transition beautifully, with no hitches whatsoever. Granted I was playing on the PS5, so I can’t speak the same for last-gen consoles.

Supermassive Games delivers yet another entertaining story that’ll delight any fans of the genre out there. While it does fall short in some areas such as the horror aspect, it more than makes up for it in its increasingly suspenseful tale, entwined with nerve-racking decision making.

House of Ashes might not offer anything groundbreaking for horror fans, or those used to Supermassive Games, but it doesn’t really need to. Those interested in this knows they are getting a cinematic, horror game that is just as fun watching, as it is playing. It won’t win anyone over who’s expecting a groundbreaking experience, but for those wanting a bit of some B-Horror action in their life, especially with Halloween around the corner, this might just be the game for you.

House of Ashes review code was provided by the publisher. Game tested on PS5. You can read SP1st and MP1st’s review and scoring policy right here.